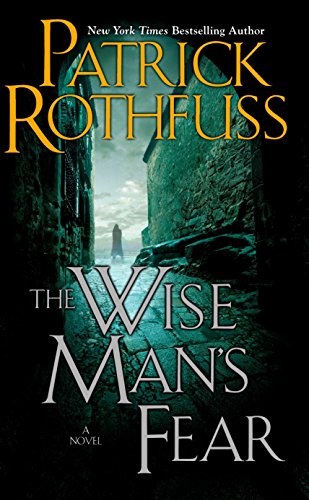 “There are three things all wise men fear: the sea in storm, a night with no moon, and the anger of a gentle man.”

Wise Man’s Fear is an extraordinary accomplishment: an 1,100-odd word book that reads like a 400 pager. It is a beautifully nested novel, always unfolding new layers of meaning and plot alike.

The book is subtitled The Kingkiller Chronicles Day Two, and that’s where we start, the morning after the setting of the first book. An adult and disenfranchised Kvothe, one-time scholar, outlaw, and adventurer is hiding out as an innkeeper in an isolated village, and is deciding what to do about his past coming back to confront him in Book One. At the same time, he’s telling Chronicler about how he came to this point in his life, starting, here in the sequel, with his time in the University at age 15.

He moves forward though his life from there with an almost hourly devotion to detail. Within this second story, he tells the stories his people are known for, and together they form a startlingly clear picture of a world hundreds of years old and in the middle of massive changes.

Both times are full of a wealth of interesting and weird characters, each one with his own reasons and purpose, and even with so many words on the page, there’s never a feeling that things are being stretched too far to fill space. Quite the contrary, it always feels as if there’s more story to be told, more layers to uncover, and more details to be experienced.

Everything is drawn with such clarity that the book as a whole feels positively sensual, deeply engaged with all the senses. Because of this, every setting location has its own identity, whether the story takes you from one room to the next or from one country to the next. The cultures are distinct and vivid, the languages ring true to the ear, the food and drink sound delicious. This is epic storytelling and epic fantasy in the best of ways, with the same attention given to the feel of a new shirt as to the sweeping scope of hundreds of years of historical wars and conspiracies.

The prose is remarkably contemporary and approachable for something set in a place rather like Renaissance Europe, the chapters are short, and there’s a wealth of wry, self-deprecating humor of the sort that can only come years after the facts being recounted when a character has had more than enough time to look at the patterns that emerge when life gets long enough.

All this adds to the unexpected readability of such a hefty book, and though the decision to break the framing story by day means the internal story occasionally reads like the breaks between shorter books—it could have been easily divided into a larger number of less-unwieldy books—in the end, it’s more than forgiven.

Mr. Rothfuss’s light hand and firm control allows Wise Man’s Fear to bridge some of the gap between literary fiction and Fantasy. The whole book is written with a delicate control that shows the writer knows exactly what’s going to happen next and what it means, but doesn’t show its bones in any obvious way.

Though frequently our slightly unreliable but immensely likable narrator plays with the conventions of storytelling and comments on the very nature of stories, how they happen and what they mean to those they happen to, it’s always done in a thoughtful, almost playful way. There’s never the idea that the author is flaunting his skill, only that he’s exploring an idea from a number of directions, amusing himself while also telling an impressively good story.

This is a story well written enough that it can easily fly by, despite its length (which is for the best, as few would want to read something over 1,000 pages long if it didn’t read easily), but it’s also well deserving of savoring. There’s enough going on that it encourages contemplation, bringing the reader into its own thoughtfulness. And it’s clever.

If you appreciate words and their usage with unexpected finesse and charm, you’ll want to linger over this one.