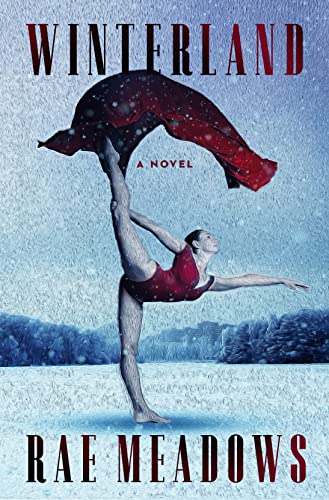 “Winterland is a rich and powerful novel in which Rae Meadows displays her talents and her subtilty as she captures the essence of sport, the power of ambition, and the menacing hand of totalitarianism whether wielded by the state, society, or individuals.”

Winterland is the fifth novel by award-winning author Rae Meadows who brings her knowledge and experience of gymnastics to this painful story. The pain is delivered in gymnastics training and in the life of Anya, the young protagonist of the story who lives with her father in Norilisk, a small city north of the Arctic Circle. The time frame is primarily the 1970s.

The mystery of her mother’s disappearance when Anya is very young adds to the difficulties of life for her. Anya’s mother, Katerina, once a star of the Bolshoi Ballet, is only a vague memory for Anya. Her father, Yuri, and family friends retain vivid images of the graceful and talented ballerina.

As a child Anya finds friendship with her friend Sveta and with Vera, a survivor of the gulag. Anya and Sveta admire the Soviet elite gymnasts such as Olga Korbut, and the two girls seek to follow the dream of joining the national team. Anya’s father works in the copper mines and does his best to provide minimum sustenance for Anya. The two have an interesting father-daughter relationship haunted by the different memories each have of Katerina.

Anya has considerable success in gymnastics and, as she moves up through the system and ultimately to the national level, her relationship with her father and her friends changes. Her connection to Vera remains the basic anchor in her life. Vera sees much of Katerina in Anya. It is through Vera that Anya learns about life in the gulag, and it is through Vera that parts of Katerina’s story are slowly revealed.

Within Anya’s life in gymnastics the world of Soviet sport is critiqued. As one would expect, hard work and self-discipline is central to success. Anatoly, Anya’s coach, has ambitions for both Anya and himself, which are central to the story. He is at times harsh and demanding while only occasionally exposing any human feeling. The hierarchy of the gymnastics system run by bureaucrats, coaches, and former gymnasts is rigid and highly political. Potential elite athletes are identified at a very young age, and they are nurtured until it becomes apparent that they lack some essential ingredient of a gold medalist. Some like Anya survive, revealing a strong will and a high tolerance for pain, drug assisted when necessary.

The parallels to what has been revealed in the last two decades about USA gymnastics are striking. The harsh coaching methods in the Soviet system were brought to USA gymnastics by the Rumanian coaches, Bela and Martha Karolyi.

Anya, at one point, encounters a doctor who is very much like Larry Nasser, down to the specifics of his massage techniques. Anya’s coach protects her from the predator, but others are not so lucky. Still, the price paid by Anya and others is high.

Another of the strong elements of the novel is Rae Meadows’ understanding of the dynamics of gymnastics. The movements are described clearly, as are the interior feelings of the gymnast as each move and element are executed. These are powerful passages that reveal the meaning and power of sports in ways not often found. Anya’s feelings while in motion are one of the highlights of this novel, as are her emotions both in success and in failure.

As in many novels built around a sport, Winterland has its sports related climax. In this case, that moment is at the Olympic Games. Unlike many typical moments, this one is not the great triumph against all odds. It is much more complicated and satisfying than this cliche.

Another interesting relationship is Anya’s friendship and love for Elena, another elite gymnast on the national team. As roommates, the two find refuge with one another. The Olympic moment for both is very well crafted by Meadows. Elena’s story provides another window on the harshness of the sports system. Meadows points out that Elena is based on the Soviet gymnast Elena Mukhina whose career tragically ended a few weeks prior to the 1980 Olympics in Moscow.

The post-Olympic story is perhaps the weakest part of the novel and seems, at times, forced and manipulated. There are some interesting turns here, but not easily believed even while they offer closure to Anya’s story. It may have been better to let the loose ends remain loose.

Regardless of this ending, Winterland is a rich and powerful novel in which Rae Meadows displays her talents and her subtilty as she captures the essence of sport, the power of ambition, and the menacing hand of totalitarianism whether wielded by the state, society, or individuals.