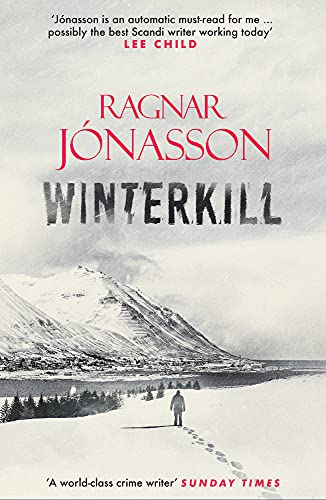 “Winterkill is a disappointment.”

A 19-year-old girl named Unnur falls to her death from a balcony and is found by a passerby. Inspector Ari Thór Arason, now in charge of the tiny police force of Siglufjörður, Iceland, must determine whether she jumped or was pushed.

An old man in a long-term care facility becomes agitated when he hears the news of Unnur’s death and scribbles “She was murdered” all over the walls of his room. Is it just a function of his advancing dementia, or does he know something?

Everyone Ari Thór questions seems to have something to hide. How do the pieces fit together? Will he ever understand why this innocuous and shy teenager lost her life in such a dramatic fashion?

Winterkill is the sixth installment in the Dark Iceland series by Ragnar Jónasson, an attorney who writes and works in his native Reykjavik. His previous novels in the series include Snowblind (translated in 2010), Blackout (2011), Rupture (2012), Whiteout (2013), and Nightblind (2014). He’s also published six other novels.

You’ll find, if you care to look, that his books have sold more than three million copies worldwide and have been #1 bestsellers in Germany, France, the United Kingdom, and Australia. He’s received rave reviews from such esteemed publications as The Times, the Washington Post, and The Times Literary Supplement.

Winterkill also comes complete with a dazzling array of puff quotes from Peter James, the ubiquitous Lee Child, Ann Cleeves, Ian Rankin, and many others. Apparently, the entire machinery of the international publishing world is behind this author and his latest title.

For some reason, as Nordic Noir continues to make money for the industry long after passing its prime, writers from Iceland consistently punch above their weight. Although the country has a population of under 360,000 people (about 62 percent of Wyoming’s, the least-populated state in America), it boasts an outsized roster of international crime fiction bestsellers including Arnaldur Indriðason, Yrsa Sigurðardóttir, Eva Björg Ægisdóttir, and Jónasson, among others.

Part of the attraction would seem to be the romantic allure of a small, faraway country with stunningly picturesque landscapes and a booming tourist industry (coronavirus notwithstanding, of course). Jónasson does his part in this regard, mentioning the nearby fjord repeatedly and sending Ari Thór on a wild goose chase to Siglunes, another settlement on the northern shore, in order to further show off the local scenery.

On the other side of the coin, however, in which Jónasson is expected to diligently mine the dark side of Nordic Noir for atmosphere and a bleak outlook on life (hence the series title), he doesn’t quite as effectively carry it off.

Ari Thór is a skimmed milk kind of protagonist. As an investigator, he asks only a few questions of witnesses, never very important ones, and gives up when they’re unresponsive or their answers contribute nothing to the case.

On the personal side, he’s separated from his wife, who has taken their three-year-old son to Sweden while she pursues her medical studies. She’s back for an Easter weekend visit here, and in response, Ari Thór vacillates between wanting to reconcile and trying to avoid angering her while simultaneously pursuing a hook-up with a former girlfriend on the side.

Honestly, it’s just not clear what characteristics this fellow possesses that readers are supposed to find attractive or likeable or interesting or engaging. He’s all over the map, completely inconsistent, and just not the type of character with the weight to carry a series this inexplicably popular.

The story is equally flat and bland. Ari Thór travels in circles, re-interviewing witnesses multiple times without making noticeable progress, and there’s a complete lack of suspense while the plot lurches forward as though trudging through knee-deep snow, peering ahead into a raging blizzard and trying to figure out what comes next.

Nordic Noir, as we’ve said, is famous for its stark, nihilistic view of life, but Winterkill only occasionally sticks its toe into these icy, deeper waters. For example, when Ari Thór considers his antipathy for cold weather, he opines:

“the only way to survive in the northernmost town in Iceland was to embrace all the seasons and resign yourself to your fate. You had to learn to love the bitterly cold winter nights as much as the never-ending summer days, when darkness is nothing but a distant memory and the sun floods the land with warmth and light. And understand how nourishing the cold can be for the body and the soul.”

Other than occasional traces of pathos experienced at the sad death of Unnur, this is pretty much as deep as Winterkill gets.

Is there an explanation for the fact that Icelandic authors such as Ragnar Jónasson end up on people’s bathroom shelves in, say, Canada, while Canadian crime fiction authors generally produce superior quality novels but continue not to exist for the international publishing industry?

It’s a mystery. One that’s somewhat more compelling than this one, certainly, because Winterkill is a disappointment that doesn’t deserve the ballyhoo it’s getting or your hard-earned money to discover just how dull crime fiction can get.