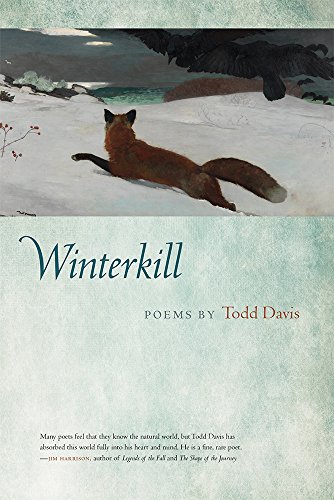 “We go to Thoreau for Nature. We come to Davis for the whole essence of being alive.”

One can certainly understand why so many fine poets proclaim the voice of Todd Davis. Such diverse writers as Jim Harrison, Jane Hirshfield, Stephen Dunn, and Pattiann Rogers find in him a welcome clarity, directness, richness of images, and fullness of treatment. This reviewer would agree with all of that praise and see in common with these other writers a deep and sharp sense of Nature.

In “Aesthetics Precedes Ethics” he follows his abstract title with a concrete description or fishing in the mountains:

The fish’s eyes continue to hold

the caddis hatch, while the thread the stream holes

itself through makes a thin space between ridges.

I spread the net of my fingers in the water,

and the trout disappears beneath a ledge, as the stream

will, if I follow it high up into the mountain.

Seeing one thing in the other, Davis captures in close detail the fish and stream, “I spread the net of my fingers in the water,” and yet by implication he suggests much more.

A perhaps unlikely comparison arrives between Todd Davis and America’s most noteworthy Nature author, Henry David Thoreau. For just as Thoreau captures the literal physical world of Walden Pond, Davis finds meaning in the life of Nature around him, from backyard deer, old fields, mountain streams. Both embrace a transcendence found in the natural world. In another fishing poem, “Signified” the poet is more direct in linking place, and memory with meaning:

When a trout leaps, unmoored by air, it can spit

the hook, unraveling meaning and remaking the time spent reading

the flow, determining which flies have hatched. Thankfully, one glides

into the net, as I search for the words to help remove the flattened barg

However, the many way in which these two Nature writers differ, suggests the real character of Davis’ writing. When Thoreau’s brother John died suddenly it is said he worked out his grief by writing, A Week on the Concord and Merrimack Rivers describing their boating excursion together. And yet, in that book there is no sharing of grief; it reads like a travel journal and not a personal reflection.

Davis, on the other hand, seems a Thoreau if he had married and had children. He opens his relationships to others and us in personal ways and so reveals what it is like to be human today. That is his finest gift. The poem “The Last Time My Mother Lay Down with My Father” is wonderfully whole and full of tender emotion. The family has gathered at the father’s deathbed and is watchful when the mother acts:

she’d been singing to him, her face near to his,

and because none of us wanted it to end,

we helped her climb into bed next to him

where she lifted his hand to her chest

and closed her eyes.

Such deep essential writing is priceless. We go to Thoreau for Nature. We come to Davis for the whole essence of being alive. This is a fine book worth having and sharing.