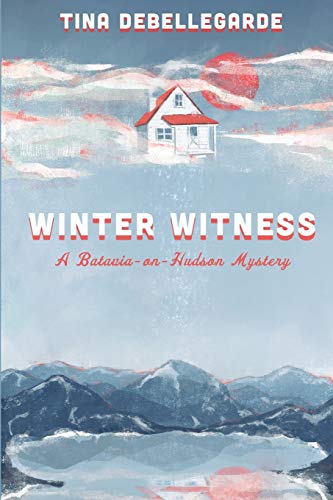 As with every novel in the universe, whether it works for you or not depends on your tastes and frame of reference.

Winter Witness may divide cozy mystery readers sharply because of these two factors.

The novel falls solidly into the cozy genre because it hits all the tropes: intimate small town, violence and sex offstage, main character who struggles to fit in, and becomes an amateur sleuth, whether by inclination or circumstances. He/she hears and learns things the police can’t access, and usually gets into jeopardy because of poking around, on their way to solving the crime(s).

Many popular cozy series are perky and quirky. Some, like Winter Witness—first of a new series from a new author—walk on the dark side. Everyone in this novel is either depressed or suffering from some heart-rending backstory that provides compelling motive to knock off first a beloved nun and then her friend, the elderly woman whose family built the town.

The setting, Batavia-on-Hudson (as in Hudson River, New York) is closer to the state capitol, Albany, than New York City. It is quaint and beautiful and peaceful, a refuge for urban escapees who unthinkingly impose on native locals. It’s also teetering on the brink of economic ruin, as happens so often with such towns.

Into this world comes Bianca St. Denis. She moves there initially with her husband, who dies suddenly and prematurely, leaving her adrift, morose, and in financial trouble.

At the point her husband died, they had refurbished a lovely old farm, and he was supporting her dreams to be a writer. Bianca, however, hasn’t worked out the realities of writerly success yet, so at story opening her efforts are still more about dreams than planting her butt into a chair and doing the labor.

She’s locked in grief when we meet her and only taking the first, shaky steps on the path to recovery. That’s when she connects with the elderly woman whose family built the town. Agatha Miller has long outlived her diagnosis of terminal cancer, and Bianca, in trying to be helpful and involve herself in the community, takes her turn in caring for and entertaining the old lady—who proves to be a font of historical information that fuels Bianca’s fire to write a book. They arrange interview sessions, and Agatha offers up her historical records, in a deal to tell her personal story. Thus Bianca becomes the witness for this lonely, bitter woman’s truth that provides the motive for her own death.

Witnessing proves to be the novel’s theme. As Bianca says at Agatha’s funeral:

“I feel blessed to have had a peek into the life of this remarkable woman. Her childhood and young motherhood were riddled with sadness. We laugh and roll our eyes at her grumpiness and impatience, but I witnessed a woman in pain, isolated in youth and choosing to remain so in old age. A woman who walked among us but remained elusive, and we were okay with that. Her death has made me realize the importance of slowing down and taking time to bear witness. In last week’s column, [reporter] challenged us to slow down and bear witness to winter, but I would like to apply this challenge to ourselves, to each other, to the community. Let us beware that we might be engaging our neighbors only on the surface, making judgments and choosing sides without truly knowing each other, even those with whom we have grown old. I for one, can think of a few neighbors to whom I would like to offer myself as a witness. And I challenge you, as [reporter] did, to bear witness to your neighbors before it is too late.”

That about sums up the novel’s purpose and explains the title. To get there, though, we must travel with Bianca through the jarring circumstances of two murders in the community and figure out how and why they occurred, while she sorts out her own business. These include a kinda-sorta-wanna love affair with the town’s unhappily married sheriff.

Ultimately Bianca’s naive probings into other people’s lives land her in danger. How this leads to the story resolution is unsatisfactorily pat. Although the author works hard to create a foundation, digging into multiple characters at a level usually found in literary fiction, in trying to shoehorn it all into the conventions of a cozy mystery results in an unevenly paced, sometimes lumpy, overlong narrative that ties up too fast and rings wrong in places.

This is a common outcome for hybrid novels. The pressures on both author and publishing company to market a book in a genre for maximum audience attraction can backfire. That seems to be true here, so it’s on the reader to decide whether the novel meets their expectations.