Winter War: Hoover, Roosevelt, and the First Clash Over the New Deal 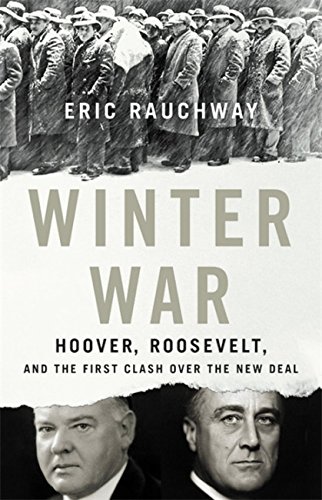 “Rauchway provides valuable insights into the minds and motivations of Herbert Hoover and Franklin Roosevelt and, in so doing, offers a valuable contribution to American political science that is well worth reading.”

We’ve all seen what happens when a new president tries to reverse his predecessor’s policies. But what happens when the outgoing president tries to impede implementation of his successor’s policies in the first place? In Winter War: Hoover, Roosevelt, and the First Clash Over the New Deal, author Eric Rauchway paints a vivid picture of what that looks like as he describes the Herculean efforts of outgoing Herbert Hoover to thwart incoming Franklin Roosevelt’s “New Deal.”

After presiding over the inception of America’s Great Depression, Hoover believed that he had the country back on the right track only to be ousted by an ungrateful electorate in 1932. He believed that the incoming Roosevelt administration, with its announced economic and social reforms, would derail the train whose course he had, with much effort, corrected and would turn the United States toward communism. Ever the calculating politician, he wrote the incoming president a lengthy letter urging him to renounce his “so-called new deal,” knowing Roosevelt would refuse, but thus setting himself up to be the country’s savior.

Rauchway writes, “In Hoover’s story, the foolish New Dealer had been given every chance to come to his senses but had each time declined. Therefore, once Roosevelt plainly failed, Hoover would be revealed as the martyr he was, the prophet unappreciated in his own country but not by history redeemed, and then the people would return him to the presidency.”

Winter War details, almost painfully, not only how badly Hoover miscalculated but also how he set the stage for future philosophical battle lines between Democrats and Republicans, as reflected by the platforms of notables such as Barry Goldwater and Richard Nixon. “Hooverism became central to Republicanism,” Rauchway says, driving home this point.

Winter War lifts the curtain for a behind-the-scenes peek at how presidential campaigns often reflect personal grudges that either motivate or taint the respective candidates. In a sense, it reveals that even presidents can sometimes be nothing more than aging children carrying adolescent chips on their shoulders.

The author portrays Hoover as essentially sulking over his unmerited (in his view) defeat at the polls but determined to cement his legacy as a thorn in Roosevelt’s side. For example, with a crisis looming over repayment to the United States of debts incurred by the French and British during World War I, Hoover punted the crisis to the new administration, hoping it would fail. “Hoover believed he had succeeded in making the debts Roosevelt’s problem and thought he had laid the groundwork for his postpresidential career as a scourge to Roosevelt.”

For his part, Roosevelt, who, rightly or wrongly, comes across as the story’s hero, dodged Hoover’s booby-traps on issues of social justice, women’s rights, prohibition, and bank failures while simultaneously dealing with new threats on the horizon abroad, such as the rise of Nazism and Japanese aggression. While Hoover concentrated on undermining his successor, Roosevelt chose to think of the country instead of a vanquished opponent. The results speak for themselves.

Presidential transitions are often anything but smooth, particularly when accompanied by lame duck sessions of congress. Outgoing presidents and their allies try to cement their legacies and, often, evade responsibility for their failures by kicking those particular cans on down the road to the next administration. For their part, incoming presidents must juggle learning a new job while simultaneously strategizing to carry out their agendas, all while evading landmines left by their predecessors.

In Winter War, the author gives us the examples of Herbert Hoover and Franklin Roosevelt and illustrates lessons we can learn from their conduct. He also traces many modern-day political differences, and the accompanying bitterness, back to their roots in the winter of 1932–1933. He notes that, after 30 years of criticizing the New Deal, Hoover’s “views came to dominate the Republican Party, and then the nation’s politics.” And when Hoover was later asked how he managed to win arguments with New Dealers and moderate Republicans, he bluntly answered, “I outlived the bastards.”

History is about learning from the past, what worked and what didn’t. It’s also about learning from the actions and beliefs of those who shaped the future by influencing the past. Rauchway provides valuable insights into the minds and motivations of Herbert Hoover and Franklin Roosevelt and, in so doing, offers a valuable contribution to American political science that is well worth reading.