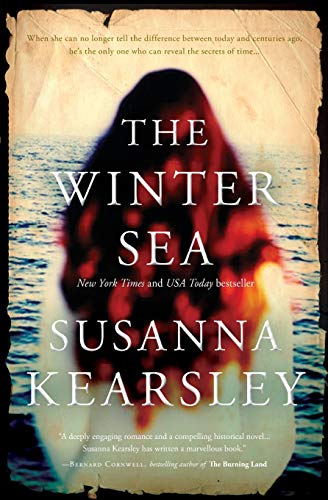 The Winter Sea is one of those novels that a reader doesn’t come across too often. It is a creative tour de force. Sometimes an author catches lightning in a bottle, and Susanna Kearsley has done just that.

The idea behind the plot is ingenious. It centers on author Carrie McClelland as she journeys to Scotland to write a historical fiction novel concerning the 1708 Jacobite Rebellion. In many ways, life imitates art as the reader gets a behind-the-scenes glimpse of Kearsley’s writing process as shown through Carrie’s work habits. It’s a fascinating look behind the veil of a writer at her craft depicted through a character of her own creation. Brilliant!

The novel is broken down into two settings: modern day Scotland with Carrie; and 1708 Scotland with Sophia, a dependent of the countess of Slains Castle. The chapters are intermingled throughout the book with numerical designations such as chapter 1, 2, 3, etc. for the present and Roman numerals for the historical segments such as I, II, III, etc.

What provides the bridge between the two worlds is Carrie’s ancestry. She discovers that Sophia actually resided at Slains Castle, and not just in her mind. To top it off, she is related to a woman she initially believed to be a figment of her imagination. As Carrie delves deeper into the story, she begins to unearth facts about Sophia previously unknown to her through dreams, deja vu, and genetic memory. The story already happened. In fact, it seems to be writing itself with Carrie serving as merely its channeling vessel.

The inherent love story also spans the centuries. Carrie’s attraction to history professor, Graham, is immediate when she happens upon him and his dog at the ruins of Slains Castle. However, Graham’s playboy brother, Stuart, tries to stake his claim her attention for his own, while back in the early 1700s, Sophia is enchanted by John Moray. However, as a loyal servant to the exiled King James, he is a man with a price on his head in his native land. In planning the 1708 rebellion and bringing the Stuart king back to the throne, his life is in constant danger. A life he does not want Sophia to have to endure.

Before Moray is recalled from Slains Castle to return to the Scottish court in France, he weds her in a secret ceremony in the hope that one day they will be reunited. Kearsley has a knack for embodying her characters with a down home sense of charm. None more so than Jimmy Keith, father of Graham and Stuart. With his Scottish lilt of “quine” and “roast a bit of beef,” the elderly gentleman and landlord of Carrie’s rented cottage is a welcome addition to the novel.

Another excellent example is Moray’s Uncle Graeme who comes to comfort Sophia at Slains Castle when his nephew is in the heat of battle in France. At interesting note throughout is Sophia’s fate. Carrie uncovers through historical documents that she married a man named David McClelland, her ancestor. What then happened to Moray? The answer to that question builds up to a heart-wrenching conclusion.

The title—The Winter Sea—is also quite moving. When Sophia is alone and worried that she will never see Moray again, his Uncle Graeme reminds her that without the desolation of winter there can be no ever-renewing hope of spring. It is a hard lesson about accepting the bad in order to appreciate the good, but it is a lesson worth learning and relearning throughout life. Overall, all writers wish for the psychic inspiration Kearsley gives to Carrie.