Winter Recipes from the Collective: Poems 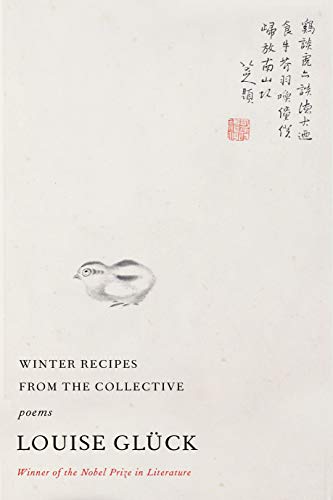 “Glück has created a pièce de résistance. This is a collection of poetry not just worth reading. It is worth tasting, reviewing, scenting, savoring.”

If poets are culinarians and books of poetry are formulaic collections of culinary art, then Louise Glück, in her latest book, Winter Recipes from the Collective, is a starred Michelin chef or a master pâtissier in the careful dispensing of her poems’ edible delights. Look at how she transposes the natural flow of the earth’s cycles with humanity’s struggle with transitions in this excerpt of her opening poem, “POEM”:

hand in hand like a boy and a girl

pausing only to eat wild berries out of a dish

painted with pictures of birds.

They climb the high ice-covered mountain,

then they fly away. But you and I

don’t do such things—

We climb the same mountain;

I say a prayer for the wind to lift us

but it does no good;

you hide your head so as not

to see the end—

is where the wind is taking us;

I try to comfort you

but words are not the answer;

I sing to you as mother sang to me—"

There is no doubt that with such an opening, Glück has made a full leap into the substance of her poetry collection in the way a master chef, in a tribute to a lifelong pursuit of culinary exploration, might define her recipes by the opening one. What stands is what the reader/culinary journeyer will take home to try with their own seasoned cast iron pots and tin-lined copper skillets. What remains will bring a savoir vivre home as an elegant expression of the power of a poet to introduce, to explain, to compare, to exfoliate excess until the distillate of her words creates the ultimate impact of her design.

There is a density to the poems in Winter Recipes from the Collective that carries its weight throughout the collection. Life, with the elemental components that make any recipe succeed, is viewed as if watching the rising of a cake through an oven’s glass door and the reader’s eyes are in direct sight of the outcome. Look at these lines from “WINTER JOURNEY”:

“Well, it was just as I thought,

We had moved then

from the first to the second stage,

from the dream to the proposition.

here is the line between,

this line from which our words emerge;

Shadows on the snow

Say goodbye to standing up,

my sister said. We were sitting on our favorite bench

outside the common room, having

a glass of gin without ice.

smiled at you as they passed,

pleased with how hydrated you were becoming.

Inside the common room, the advanced cases

If you can’t read, my sister said,

can you be happy?”

Glück tracks a line in an ordinary traverse of something—any event could be the meaning of the first lines, “Well, it was just as I thought, / the path / all but obliterated"—and brings it to the front, so that the traverse is much more than ordinary. It’s the culmination of a life, but not one consumed by regret. Far from that. It’s a life still exploring the opposites that bring interest to every day and Glück shows that, early in the poem, in the lines:

“Say goodbye to standing up,

my sister said. We were sitting on our favorite bench

outside the common room, having

a glass of gin without ice.

smiled at you as they passed,

pleased with how hydrated you were becoming.”

Later in this poem, she cements the concept that the value of the recipe is in its ever-adapting presence. And yet, a reader may wonder if this is the plainly observed recipe the pâtissier intended:

“We were having a fine old time getting old,

everything hunky-dory as the nurses said,

though you could tell

snow was beginning to fall,

not fall exactly, more like weave side to side,

sliding around the sky—"

It is precisely in the dynamic of “sliding around the sky” that the reader will glean a true maxim of the poet’s intent. And Glück has communicated that, in weaving it within this collection, like the pâtissier weaves the lattice of a pie crust or arranges the apple slices of a tarte tatin to maximize the sense of perfection found within the imperfection of its form. “The wind blew,” she says later in the poem. “Nights I could see / shadows of the pines, the moon / was that bright.” And later, in a confession of the need for community, she writes, “the dark obscured her. / Still her presence sustained me: / some of you will know what I mean.”

It is not in the shadows of Winter Recipes from the Collective that the poet shows her mastery of form and sense, rather it is in the sensibility that is contained behind the shadows—something often in clear view yet missed for its plainness—that she works her recipes to elevate their result into something remarkable, something every reader of poetry longs to find and will revel in, once discovered. “And yet, moments ago / the sun was shining. How joyful my head was, / basking in it, getting to feel it first,” she writes in her poem, “PRESIDENT’S DAY.” Later she ends the poem’s final stanza with a succinct message. “Joyful—now there’s a word / we haven’t used in a while.”

Is Louise Glück a master of poetic form? If a reader finds form as the only meaning in this collection, then yes, without a doubt. But there is much more than form at play in Winter Recipes from the Collective. Do the poems within the collection reveal a hidden truth? If by hidden, a reader thinks of digging deep to find it, then they are missing the point. The collection is a juxtaposition of elements that deals with the most essential truths of our time. Truths that elevate a basic recipe into a rare essence of exotic culinary creation. Truths that are familiar in their plainness and haunting in their esoteric depths.

In Winter Recipes from the Collective, the latest addition to her 13 other poetry collections and in her lifetime of accolades and awards, including the Nobel Prize in Literature, the National Humanities Medal, and the Pulitzer Prize, Glück has created a pièce de résistance. This is a collection of poetry not just worth reading. It is worth tasting, reviewing, scenting, savoring.