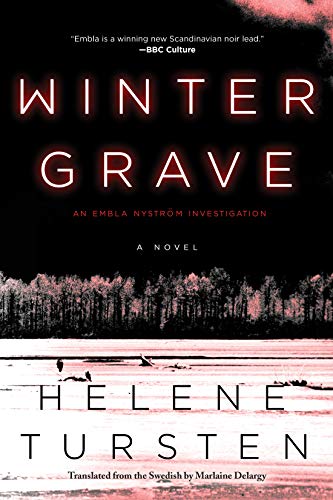 “Tursten’s books present the Swedish setting as if it were a character, in rich, active detail. The cultural quirks that make this so interesting for American readers are front and center in the crimes.”

There’s plenty of energy in Helene Tursten’s new Swedish series featuring the young Detective Inspector Embla Nyström. When the first in the series, Hunting Game, came out, it introduced this new detective while letting the protagonist of the established earlier series, Inspector Irene Huss, linger just off stage. Winter Grave, book 2, again slides Hess into one scene, then releases her to focus on Embla’s search for two missing children—stumbling into two murders, arson, and a violent attack on a young man limited by autism spectrum disorder (ASD).

In a horrible “Other-shaming” cascade of events, parents of the two missing children in the town of Strömstad decide that the children must have been “taken” by a young man who’d been a friend of one of the children: Kristoffer Sjöberg. Kristoffer’s father Olof, a staunch protector of his grown son, is sure the young man never would have done such a thing. In fact, Embla and her team soon feel the same way. There’s even a sensible alibi for the youth. But bigotry in the town isn’t rational, and things quickly spiral out of control—taking the major crimes team away from clues and witnesses, to copy with harsh vigilante action instead.

For Embla, a seasoned outdoorswoman and wrestling champion currently slowed by a recent concussion, the investigation showcases the worst of small-town life. It’s also highlighting odd behavior among the investigators, while she herself launches into a one-night stand with an attorney connected to the case, yet another distraction from the challenging investigation.

Tursten’s books present the Swedish setting as if it were a character, in rich, active detail. The cultural quirks that make this so interesting for American readers are front and center in the crimes, from a St Lucia pageant that involves one of the children, to interactions with the seacoast, to the Scandinavian country’s different crime team setups.

The book has a brisk pace and plenty of twists, as well as some frankly sexy scenes for Embla when not on the job. Marlaine Delargy handles the translation, as she has for others from this author, and it’s clear and well written—but also a bit flat, as sentence structure becomes a counterweight to the plot and drags it down. It’s tempting to assume this is the price of Scandinavian noir (like the endless depressions of Henning Mankell’s books), but because Embla is actually a lively and likeable character, that’s unlikely. Frequent shifts of point of view don’t help. Whichever the cause, the reader will need to summon some tolerance and keep faith in the plot itself.

Here’s Embla questioning Kristoffer’s aunt, after the young man’s been so brutally attacked that he’s incapacitated in intensive care:

“’It’s appalling, but of course we’re doing our best to track down whoever’s responsible,” Embla assured her. “Do you have any idea who could have done such a thing?’

“Eva snorted. ‘It could have been just about anybody! There’s been so much gossip since Amelie disappeared—Kristoffer’s crazy; he better not approach girls of his own age; he’s shown signs of being a pedophile in the past. It’s all lies, every single word of it!’

“Her cheeks were bright red now. Embla nodded to show that she was on Eva’s side. ‘Have people said these things to you? Or to Kristoffer?’

“ . . . ‘It’s all on the Internet. On Facebook. People have posted so many lies about Kristoffer, and he’s gotten some terrible text messages. . . . Kristoffer doesn’t say a word—he just gets . . . quieter.’”

The finale of the case is tragic but offers a path forward for Embla herself. Yet a startling last episode in her own life spins the book toward its sequel, sure to explore the darkness behind this Detective Inspector’s own life. Make room on the bookshelf for more of this intriguing series.