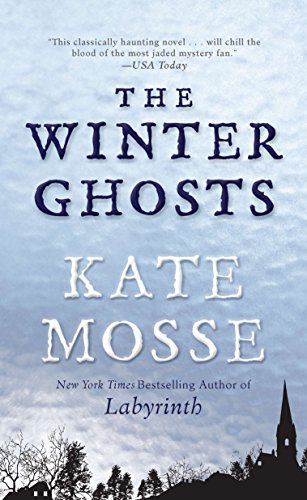 “A sad tale’s best for winter.”
—The Winter’s Tale (II.i.25), by William Shakespeare

At face value, Kate Mosse’s The Winter Ghosts, has something of the simplicity of a snowflake. Beautiful, yes; poignant, definitely; and, uniquely for a work by Mosse, it is not a huge, weighty tome. This slim volume was written while Mosse is reputedly still working on the third of her blockbuster (in terms of sheer weight of pages as well as worldwide bestseller status) trilogy whose first two books are Labyrinth and Sepulchre. And although Mosse again locates The Winter Ghosts in the south of France, simply moving away from the constraints of her trilogy appears to have acted to free her, for here her writing is immediately far more lyrical, far more artfully constructed. Quality has definitely taken precedence over quantity.

Indeed, this is a book to be read in one sitting, a tale to be told in front of a roaring log fire in a room with a view of a snow-covered landscape. In the best traditions of Shakespeare, this is a winter’s tale that is at once timeless and thrilling. It’s a modern twist on the pastoral, but it is also about much more than that. It’s about the winter of war and of grief and of loss. It’s a ghost story which stands comparison with classic spectral tales from the likes of M. R. James, Algernon Blackwood, Henry James, Susan Hill, and Edith Wharton. It’s both a page-turner and a poignant love poem to the landscape of southern France that Mosse so loves.

Experienced Mosse readers will immediately feel at home as the novel opens. It’s 1933, Toulouse, France. A young Englishman, Freddie Watson, enters a side-street bookshop, bringing an ancient parchment penned in the Occitan language, the old language of the border, or Cathar region of the south of France. This is unmistakeably Labyrinth country—as is the mystery as to how this rather shy Englishman has come by the parchment in the first place. But this is where the comparison ends. As Freddie begins to tell his story to the bookseller, we immediately learn that he has nothing on the immediately engaging characters of Labyrinth. Told in the first-person, The Winter Ghosts appears straight away a far more introspective story.

His tale, as he tells it, begins in 1928, when Freddie, haunted by the loss of his brother George in the Great War, and recently an inhabitant of the sanitarium, follows the advice of his doctor to visit the Pyrenees in order to clear out a few cobwebs and to restore his health. At first, it seems the change of scenery has changed nothing. Freddie remains incredibly isolated, indelibly guilty. He sees, or thinks he sees, the ghost of his brother in the margins of every scene. Thus traumatized, Freddie can’t even be sure of the ground beneath his feet. “I occupied an emotional no-man’s land, neither moving forward nor moving back.”

France, too, is scarred by the Great War, caught up in a limbo between remembering and moving on. In her own notes regarding the novel, Mosse writes: “A theme running through all my writing is that landscape itself has a deep and profound memory, which passes from generation to generation, is capable of telling its own tales . . .” And despite the fact there was little in the way of actual combat in the south of France, the war stole a great number of young men from the region, stole their futures as well as the futures of their friends and families.

“The dead leave their shadows, an echo of the space within which once they lived. They haunt us, never fading or growing older as we do. The loss we grieve is not just their futures but our own.”

Her France is “A green land soaked red with the blood of the faithful . . .”

And yet the French landscape does act to shake Freddie out of his wintery desolation and his inertia.Whilst on the road south, high up in the mountains, Freddie’s car skews off as a result of an incredibly localised, incredibly sudden snowstorm. And he starts to hear the voices of the landscape calling to him. Up in the thin, cold air, so high above sea level, Mosse brings in the agent of change. Freddie effectively steps out of time and enters the liminal world of Mosse’s invention, a place “where prehistory, mythology and history all melt into one.”

Searching for shelter from the storm, Freddie blunders upon a small town lost in the mountains, the aptly named (and imagined) village of Nulle. Nulle is “a tiny dot on the map, the name buried in the fold of the pages.” It is a clouded, muffled, dreamlike place. Mosse’s repetition, almost over-use of the word “fug” seems to characterize this. It is a place which forever drifts in and out of a “twilight state.” It is a place on the edges, where strange things happen.

As soon as Freddie reaches the village, “. . . instinctively I knew there was some kind of cloud, some sadness, hanging over the village. That something was not quite right, was misaligned, like a picture askew on the wall.”

This is a place where clocks have stopped, where time itself operates differently: “I had a sense of the minutes counting down to some zero point. I looked at the clock on my dashboard. Last time I’d noticed, it had been coming up for two. Now the glass was shattered and the hands hung uselessly down at half-past six.”

And later: “I was surprised that so little time had passed since I’d abandoned the car on the road. But I knew as well as the next man how our experiences mould themselves to fill the time allocated to them. It was easy to believe that shock and the foul weather had muddled my sense of time.”

And: “I knew I’d taken my time but, even so, I was surprised that it was ten o’clock already. In the sanatorium, sedated by my physicians, whole days passed in the blinking of an eye. On other occasions, blunted by the medicines they force fed me morning and night, the world seemed to limp to a standstill. Even so, had seven whole hours really gone by since I’d first arrived at the boarding house?”

In its own mysterious way, Nulle brings Freddie’s grief to a head, forcing him to confront past, present, and future. Indeed, the whole mystery of the place seems to be embodied in the person of Fabrissa, the woman he meets at the village fete on the first evening he is in the town. Fabrissa is by turns freezing or burning hot, winter and spring. She is also a decidedly ethereal presence: “The night air seemed to shift as she passed, and there was something about the translucent moonshine that gave me the impression she was made of air or water, rather than blood and bone.”

After spending the night sharing their war stories and their grief, Freddie returns to the hotel and: “For forty-eight hours, I drifted in and out of consciousness. Time had little meaning. How could it, after what had happened in Nulle? Now, then, in the past, in the present, all just words. The passing of days, as measured by the accretion of seconds and minutes and hours, was too rigid.”

By stepping outside time as we know it, Freddie is able to come to terms with the universality of grief and loss and death: “The whole village knew. My pretty nurse, Madame and Monsieur Galy, all of them had grown up in the shadow of the deep sadness that enveloped the village. Not only from the last war, but all the wars going back through the centuries. The inhabitants of Nulle, present and past, knew how such profound grief erodes the spirit.”

And he is also to come to an understanding of who he is, apart from the haunting shadow of his brother, which I will leave you to discover on your own.

Like Shakespeare’s The Winter’s Tale, The Winter Ghosts ends not with sadness and haunting memories but with the promise of spring through the transformative power of courage. As Fabrissa says: “To survive when others do not takes a particular sort of courage. . .” By stepping outside time, Freddie learns how to remember, but also how to never lose sight of the future, and ultimately, how to act.