Winter at the Door 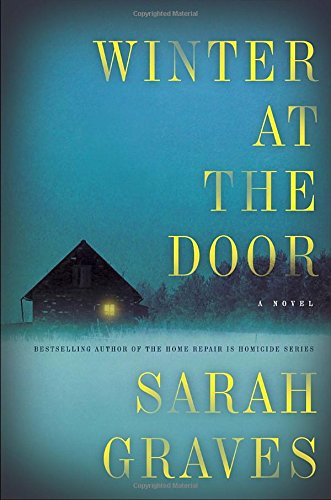 “Such a chilling environment has room for many more adventures. Stay tuned, for this series will likely take off.”

The whodunit, how, and why of this book are intriguing enough to keep the pages a-turnin’. Beyond that, whether the characters and narrative style induce you to follow this new series depends on your taste in crime novels.

Written by the author of the Home Repair Is Homicide books, Winter at the Door delivers all the stock elements of a contemporary police thriller: short sentences and scenes, cliffhanger chapter and section endings, a tough but vulnerable main character, an evil but human villain, and a steady buildup of danger that springs out from behind every corner.

The bleak setting (in this case very up-country Maine) is where Boston homicide detective Lizzie Snow moves to follow a nebulous lead in her quest to find her missing niece. Her way is paved by the machinations of her ex-lover, a Maine state cop; and the county sheriff, both of whom need Lizzie for personal reasons—the sheriff to get help investigating multiple suicides of retired cops that he believes to be murders; and the ex-lover, maybe, to get Lizzie back into his bed.

Neither man helps much in preparing her for the cultural and environmental changes between big city and rural nowhere. More like, they drop her into the deep end to sink or swim.

In that regard she’s surprisingly short of self-preservation instinct for someone with a police background. Her occupation, old and new, is the least persuasive aspect of the story. It sometimes feels like a character was conceived and a job picked for her so that she could have exciting adventures. (Granted, that’s how novels come into being, but one expects not to notice the author’s hand.)

Lizzie’s motive feels thin, too—it’s described but not lived emotionally, as she’s too busy reacting emotionally (and hormonally) to other things. What comes through is a sense of desperate loneliness and alienation, giving the impression that seeking her niece is more about herself than the child.

The combination shows how far Lizzie is out of her element. But being a city slicker ignorant of and obtuse about north-country life is perhaps her most credible attribute. It creates an expectation that she will ultimately get into trouble out there in the wilderness; but when that finally happens, she proves adept at extracting herself while gaining ground in a joint murder and drug investigation. She may dress like a Boston babe, but she’s got chops when the going gets tough.

The author has a choppy style of interweaving thoughts, speech, and scene setting, which sometimes needs rereading to figure out who’s talking or what happened. This may be an attempt to create a fast narrative pace. Suspense is created similarly by hopping between character viewpoints to dole out a partial piece of the puzzle at a time.

Sometimes those interwoven bits evoke a moment that gives aesthetic pause, like, “the crescent moon low in the sky was pale silver, the color of a knife blade,” in a night with a “stillness so huge that it felt like an actual presence.”

The Maine woods: “. . . looking now like huge shapeless holes that all the rest was in danger of falling into. Or being devoured by; much more forest than anything else. A city street could look ominous, too, whether emptily menacing or full of trouble. But it never looked . . . implacable, as if it would do whatever it wished with you without explanation. As if once you were in it, you’d be just another specimen of prey, engaged in the age-old dance of the hunter and hunted.”

Brrrrr. Winter at the door, indeed.

Such a chilling environment has room for many more adventures. Stay tuned, for this series will likely take off.