Winslow Homer and His Cullercoats Paintings: An American Artist in England's North East 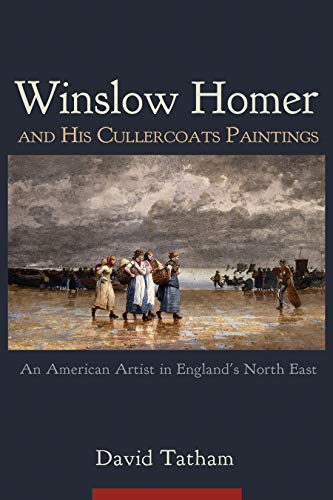 “Homer was an expressive artistic powerhouse, and the Cullercoats work proves his versatility.”

Winslow Homer and His Cullercoats Paintings appears, at first, to be a quick and simple read, coming in at under one hundred pages of text and covering only 20 artworks. Judging the book by this measure alone would be a grave mistake; art historian David Tatham presents a well- researched and well-written assessment of Homer’s work during this 18 month period (1881–1882).

In March of 1881, a 45-year-old Winslow Homer (1836–1910) sailed to England and stayed in the Northumbrian village of Cullercoats. Other than the paintings Homer produced during his visit, there is little information on why Homer made this journey or what his intentions where. Homer was already a well-established American painter, if perhaps considered a bit provincial compared to his European-trained peers. Maybe, just maybe, he wanted to up his game.

Regardless of his motives, Homer spent most of his days drawing and observing the village, the fishing activity, and the sea, creating almost one hundred watercolors, “all distinctly different from his earlier work in the medium.” He made 50 exhibition drawings and a handful of oil paintings all illuminating the life of the village more than anyone had done before him. Homer’s work ethic, Tatham observes, matched that of the community. In essence, Homer created a new look for himself and elevated his reputation in the figure painting genre. Tatham graces Homer a “New Artist.”

Tatham himself paints a prosaic picture for the reader of what the 15-acre village and its bay would have been like in the 1880s. He describes for us the roles of the “fisherfolk,” he interprets what Homer’s life might have been like while working with local models and interacting with the families in the community, and he describes what the art world was like at that time as well as Homer’s position within it.

After an insightful history/anthropology lesson, Tatham takes a turn into discussing the 20 color plates representing the highlights of Homer’s Cullercoats oeuvre. Regardless of whether Homer used a male, a female, or a community of figures together, every picture emphasizes a mood, a feeling, a weather-influenced condition; it was atmosphere that Homer captured, the story of the emotion.

He painted impatience and boredom in his Beach Scene, Cullercoats (1881), where three young “fish-lasses” are slumped about waiting on something to happen. In The Gale (1883–93) he painted the fury of the wind and the determination of a protective mother. Inside the Bar (1883), an image of a solitary woman navigating a rocky bank with the wind billowing her apron skirt, is full of confidence and self-assurance. An Afterglow (1836) is a scene of warm, lighthearted chatter among fisher-wives, the life blood of the community.

It is clear that Homer had a tender touch with mighty power. Even in the reproductions one can see his sketch lines and his control with his brush. The watercolors are unbelievably expressive and complex. Like an Olympic gymnast on a balance beam, who makes the task look easy, only to find, once attempted oneself, that this is actually much, much harder to accomplish—such is the case with Homer’s watercolors. Which is the very point that Tatham makes: Homer was an expressive artistic powerhouse, and the Cullercoats work proves his versatility. And maybe, just maybe, this is what Homer was hoping for all along.