Within the Sanctuary of Wings: A Memoir by Lady Trent (The Lady Trent Memoirs) 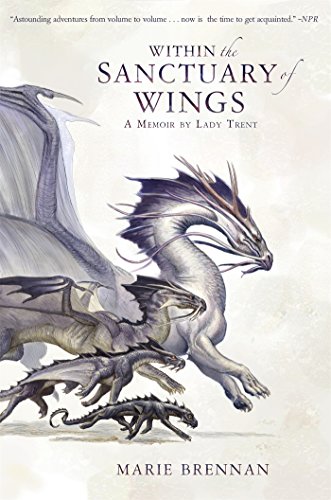 This fifth and last book of Lady Trent's Memoirs, Within the Sanctuary of Wings travels into one of the last unexplored places in her world in search of a new kind of dragon, just as war threatens to break out between her homeland's empire and their long-time foes.

Shortly before her fortieth birthday, Lady Trent and her linguist husband, her scientific partner, and the man who brought her the evidence to convince her to go, head into the Mrtyahaima mountains (something like the Himalayas), and get separated by bad weather. There, she discovers the source of the ancient civilization of the Draconeans that she's been studying and tracking all across the globe through all five books, and their last surviving legacy.

Within the Sanctuary of Wings has the same no-nonsense discussion of a life full of adventure and science as the previous books, and the additional payoff of her finally achieving the goals she first set out to do: proving herself worthy of being taken seriously as a scientist despite being a woman in a male-dominated society—and she just happens to change the world along the way. The fact that she just wants to understand things, and just semi-accidentally happens to discover wonders and get involved in global shifts in her world, is one of the perks of this series.

These have been incredibly entertaining books, and it's sad that this is the last one, but it's a good one to end on. Lady Trent does well, everyone around her gets their stories neatly wrapped up in the prologue, and the real winner in all these struggles is science and natural history. No matter how irrational the real world may be right now, here, critical thinking and rationality win out. It's immensely satisfying.

Brennan's delicate touch at describing the settings and the cultures, emotional shifts and academic details, more than balances the strangeness of a world so like ours and yet full of dragons—and, in fact, uses the strangeness to further build the world. Because despite being very similar to ours, it is, after all, a fantasy world with its own rules and history, and it's fun and exciting watching it unfold, right up to the end.

There's also a perfect balance between Isabella in the future, telling the story with knowledge of what comes after and what it means, and her in the present of the book, muddling through it as best as she can.

Further, there's balance between romanticism and realism, reality and fantasy elements, the discussions of how science works and how the heart does, and between character development and worldbuilding. It's a rich, delicate, detailed, and expansive world, and we feel like we've seen most of it by the end of this book. It feels also like everything has a purpose, and the book runs, this far into an ambitious and complex series, like a well oiled machine.

Wings is the end of a series that feels like it's always known where it's going—as is appropriate for a story built on the idea of being a memoir, told after the fact. It's still charming how Lady Trent tackles the scandals her adventures kicked up, dispelling them with truth and accuracy rather than bluster; and Isabella, Lady Trent, is a wonderful role model of a woman in a man's world, doing her best. There are plenty of times when the book is so absorbing it feels like she's real.

Everything has been building to this, and we're not left disappointed.