Wines of the New South Africa: Tradition and Revolution 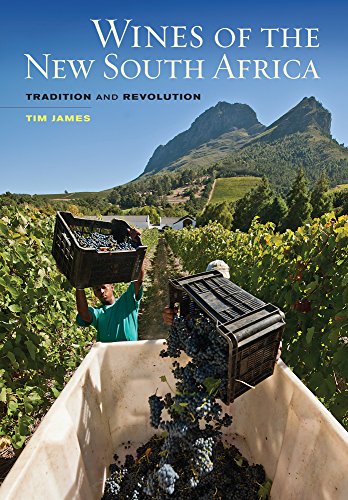 The first quarter of the book is the background. After the introductory essay on the state of South African wine making, Mr. James gives a history of South African wine from its beginnings as part of the Capetown victualing station in 1652 through the ending of apartheid in 1994 and the dropping of international sanctions.

In the 18th and 19th centuries, a dessert wine from the winery Klein Constantia had a great reputation in Europe, rivaling wine from Sauternes. But as Mr. James notes again and again most South African wine was simply awful and continued to be well into the late 20th century. The South African wine regulatory body, the Koöperatieve Wijnbouwers Vereniging (KWV), unintentionally tended to reward overproduction with no regard to quality.

The South African wine industry suffered from the same problems facing the European wine industry in the 19th century, the fungus powdery mildew and the pest phylloxera. To this day, the vineyards are plagued with leaf roll virus, which may affect the flavor of the wine.

This part of the book is scholarly, loaded with facts and figures, as befitting a University Press publication. The reader casually interested in South African wine will learn far more than she probably cared to from these chapters. Those studying for wine certification exams will find the information useful.

Mr. James then provides an extended overview of the grape varieties in South Africa, with many facts and figures on the size of plantings, and their trends. It includes the history and characteristics of South Africa’s own contribution to the grape world, pinotage, a crossing of Pinot Noir and Cinsaut—again at a level of detail that would be useful for wine scholars, but more than the casual drinker would want to know.

The chapter just preceding the look at regions and wineries is a handy reference to the South African Wine of Origin law, which explains the nesting of regions in South Africa. For instance, the large Coastal Region includes many districts, such as the famous Stellenbosch and Paarl, while the Paarl district includes the wards of Simonsberg-Paarl and Voor Paardeberg.

As with the U.S. American Viticultural Area (AVA) tendency to break up regions into smaller and smaller areas, the wards are so many and so unknown that it is common for a winery within a ward to use the more well-known district. And the labels do not tell the wine purchaser whether Hemel-en-Aarde Valley, for example, is a region, a district, or a ward (it’s a ward, featured on the label of our favorite South African Pinot Noir).

The remaining three-quarters of the book cover each wine district (or group of districts), giving some background of the history of the region, the wards, and the wineries in that area, in alphabetical order. Each chapter includes a simple map, with the wineries discussed shown.

South Africa has just over 500 wineries, and Mr. James has a discussion of just over 170 of them—remarkable coverage. The wineries are given between a paragraph and two pages each, giving background, and what they make. The book here switches from the academic style of the opening chapters to a more easygoing style, more in line with a typical winery guidebook.

Many of the wineries are familiar to US wine drinkers, but many more do not make it to this side of the Atlantic.

Aside from the maps, there are no photos or illustrations, just straightforward prose. Mr. James does not provide any information about the exact location of the winery other than providing its web site. This could be a useful book for a wine tourist, browsing through the book to think about what wineries to visit, but then one must consult the web site to learn about visiting.