Wine Wars: The Curse of the Blue Nun, the Miracle of Two Buck Chuck, and the Revenge of the Terroirists 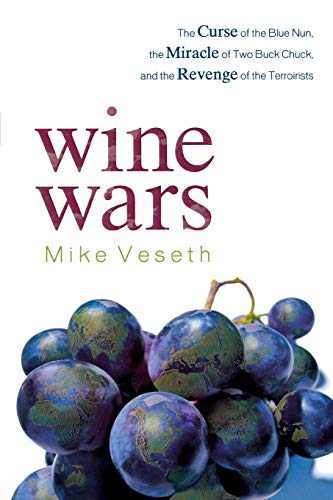 Mike Veseth’s Wine Wars is broader than simply a book on the economics of wine, but it definitely looks at the trends that shaped the global wine industry as it has become today from an economist’s perspective.

Dr. Veseth became a wine economist, he writes, after a trip through California wine country 30 years ago, when he drove up to a winery along the Silverado Trail in Napa Valley, and the winemaker himself (unidentified in the book but there are only a few possibilities) poured him some wine from a makeshift plank over barrels. The conversation turned around when the winemaker learned he was an economist and began peppering him with economics questions. (I had a similar experience near the Silverado Trail 30 years ago, when Charlie Wagner [the elder] of Caymus poured me wine in the shed in the back and then found out that I was an international trade lawyer. So I believe the story.)

The world of wine is significantly different than it was 30 years ago, and Dr. Veseth identifies three forces that have been driving these changes: globalization, branding, and a countervailing trend Dr. Veseth calls “the revenge of the terroirists.”

Globalization has changed much of what we find on the top and bottom shelves of what author Veseth calls the “wine wall,” the real and virtual places where consumers confront the wide choices of wine available. On the top shelf, the most prestigious wines fine their way around the world, recently most notably in Asia. On the bottom shelf, globalization means that wine can come from anywhere, in huge containers that can be shipped across the world to make wines that can be blends from around the world. Here, price competition is fierce, and wine makers from places like the Languedoc of France find that their cheap—but not very good—wines no longer have a place.

Branding (or as Dr. Veseth calls it, “the miracle of Two Buck Chuck”) means that people who have found wine intimidating can take comfort in wines like Yellow Tail and Charles Shaw (aka Two Buck Chuck). There is the hope that these people will someday trade up to better quality wines—and the fear that their tastes will be permanently degraded.

On the other hand, so-called terroirists push back for the concept that wine should convey a sense of “somewhereness,” reflecting the terroir of where the grapes were grown.

If just these three topics were the focus, the story could have been written in a much shorter book or even an article. Instead, the story takes us along many side roads that relate generally to wine economics, but we do not mind, because these stories are fascinating and informative.

An example is the story of Aldi. The Germans, it turns out, consume far more wine than they produce, but they prefer their wines to be as cheap as their beer. So they import large quantities of the equivalent of One Buck Chuck. The “hard discounter” supermarket chain Aldi sells one third of all wine in Germany, and 75% of foreign wine sales. Aldi, short for Albrecht Discount, was founded by Karl and Theo Albrecht in 1948.

The brothers had a falling out long ago, so they split into Aldi North and Aldi South, dividing Germany, and later the world. Aldi South opened its first store in Iowa in 1976, a small store stocking perhaps 500 house-brand items at huge discounts. There are now about a thousand Aldi stores in the U.S., each stocking around 1400 items.

Aldi North took a different tack in the U.S., and bought a more upscale chain that still appeals to bargain hunters. Dr. Veseth adroitly brings us along, revealing at the last moment that Aldi North in the U.S. is Trader Joe’s, the purveyor of Two Buck Chuck. The book is full of wonderful surprises like that, revealing relationships that are normally not apparent to the typical wine buyer. The list of brands around the world that are actually part of Gallo, for example, is eye-opening.

Another chapter explores the battle over the idea of wine between the Wagnerians and the Martians. If this were a review of a novel, that is a plotline that we would not give away, so you will have to read the book to find out what that means. Dr. Veseth is fundamentally optimistic about the future of wine—at least from the point of view of the consumer. There will be winners among wine producers, and losers, like the vintners of the oceans of wine produced in the Languedoc who contribute to the wine glut and who are encouraged to grub up their vines.

But those consumers who find Two Buck Chuck quite satisfactory will likely have that choice for the foreseeable future. Those who worry about the internationalization, or the “Parkerization,” of wines, can find comfort in all those producers who buck that trend and make wines of great individuality. The producers of indifferent wines who hide behind terroir may suffer, but the better producers combine new and old ways to make high quality wine that will be sought out.

What is the likely audience for such a book? Someone studying for the Wine & Spirit Education Trust’s Diploma exam should learn the material in this book. A Master of Wine should definitely know at least this material, but actually quite a bit more. Someone in the wine business, or interested in going into the wine business, be it retail, distribution, or even wine-making, should be familiar with this material.

For all of these people, Wine Wars is an entertaining way to get an introduction to the subject. Dr. Veseth writes in a colloquial style and presents a large quantity of economic information with nary a table, graph, or chart.

For the everyday wine consumer, there may not be much information of interest here if all she is interested in is a guide to what wines to buy or a discussion of how to enjoy wine. But anyone with an intellectual curiosity as to how all the factors came together to produce the wines available to us today will find much in Wine Wars to satisfy that curiosity.