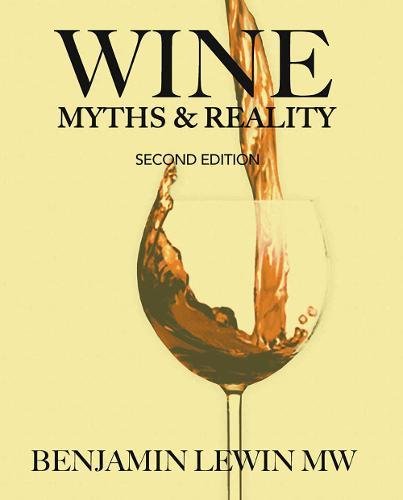 Most wine writers were likely English or history majors or the like, and many wine books talk about the romance, mystery, and poetry of wine, and sometimes describe wines in anthropomorphic terms. What happens when a distinguished Ph.D. geneticist obtains his Master of Wine and becomes a wine writer? We get a book like Wine Myths and Reality, which is refreshingly different from other wine books.

Benjamin Lewin received his Ph.D. from Cambridge University, and in 1974 founded the journal Cell, which became one of the top-level journals in its field. He sold Cell in 1999, presumably giving him the time and money to ratchet up his interest in wine. He passed the Master of Wine exams in 2008, and promptly published What Price Bordeaux? Wine Myths and Reality is his second book that does not deal with genes—although this is not exactly true, since the book contains many discussions of the genetic history of various grape varieties.

This is a dense (636 pages) book, covering the broad range of the wine industry, from growing grapes to making wine to selling wine, and then touring the major wine regions of the world. But it blessedly does not read like an article in the journal Cell. Dr. Lewin writes in an easy-to-read, breezy style, although he includes a copious number of charts, graphs, and tables, along with maps and annotated Google Earth views of wine-producing areas.

Dr. Lewin tackles a number of myths along the way, such as the romantic notion that “wine is a living thing.” Wine might have living things in it, such as yeast and the bacteria responsible for malolactic fermentation, during parts of the production process, but “(w)ine is basically a mixture of alcohol and water with various flavoring compounds dissolved or suspended in it.” The fact that it changes as it gets older does not make it a living thing.

Sometimes Dr. Lewin pulls his punches in coming to conclusions, perhaps a habit from his scientist days in which data are presented but definitive conclusions are frowned upon in scientific journals. For example, in discussing whether terroir matters, in particular whether one can taste the components of the soil in the wine—such as the blue slate in the Bernkasteler Doctor vineyard imparting a mineral character to the wine—he discusses at length how plants take up nutrients.

He notes that trace elements found in wine are at levels well below the taste threshold. “Indeed, it is unlikely that any of the nutrients taken up from the soil reach levels you could taste in the grapes.” After discussion of the research that shows that the flavors of the wine are not ingested from the soil, he concludes that “(i)t is fair to say that the jury is out on whether mineral contents of soil are reflected in any systematic way in berries or in the smell and taste of wine.” From what he wrote it seems fairer to say that the jury has come back with a verdict of “not proven.”

Other times Dr. Lewin gives a flat-out conclusion, as when he discusses the claims of some winemakers that they try to intervene as little as possible, and let the wine make itself. He discusses in great detail the myriad decisions that a winemaker makes in turning grapes into wine, and finds that their decisions make all the difference in how the wine turns out. If grapes were left to their own devices, they would make vinegar. He concludes: “No: wine does not make itself in the vineyard. The winemaker makes the wine.” This is probably the best and most important part of his book.

The second half of the book, basically a region by region tour of wine-producing areas, is perhaps less successful in busting myths, except indirectly the myth of some wine regions that you are drinking wine made in the traditional way, going back hundreds of years. This part of the book is especially invaluable in detailing the enormous changes made in the type of grapes grown, the way they are grown and harvested, and the way in which wine is made, especially in the last 20 years of so, but going back to the eighteenth century or before.

In this part of the book, Dr. Lewin indulges in presenting some standard material about the wine regions that one might get in a book by Hugh Johnson (who was the British university equivalent of an English major), and if one is familiar with that material one’s eyes might start to glaze over.

But then he throws in a zinger. For instance, in talking about the Alsace region, he writes about the beautiful villages, the amount of rainfall, the location of the vineyards on the slopes, the types of grapes grown, and the appellation system in that region. Then he writes: “Alsace today is in a full blown identity crisis,” noting that there is no agreement on whether the grand cru system is worth anything, and no agreement on style (from bone dry to somewhat sweet without any indication on the label).

Dr. Lewin also points out that when the classed growths of Bordeaux were set in 1855, the red wines had a rosé color (compared to purple today), averaged 10 percent alcohol (compared to 13.5 percent today), and had one gram of tannin per liter of wine (compared to 6 grams today). The Bordeaux wines of 1855 were thus vastly different than today, and yet the classification has remained virtually unchanged. These points keep popping up, so we want to read through the whole thing to be presented with these deviations from the standard propaganda.

The quantitative data that this part of the book abounds in are useful in providing a perspective on the relative sizes of wine production. For example, it is helpful to keep in mind that the Grand Cru wines that get the majority of the attention regarding Burgundy constitute only one percent of wine production in that region. Likewise, vintage port constitutes only one percent of port produced.

Errors noted by this reviewer are very few for a book of this scope, and all are too minor to be mentioned here.