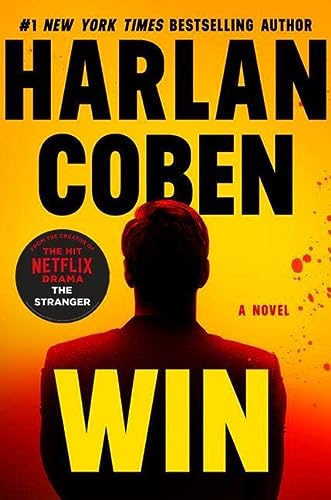 “Win is the type of spin-off novel that will be wildly popular with Coben’s fan base as an extension of what they already know and love.”

In the world of suspense novels, Harlan Coben is a household name. With 33 titles to his credit, including his latest, Win, Coben has risen to the top of the charts as a #1 New York Times Bestseller. His books have been translated into 45 languages with more than 75 million copies in print, and he’s been a #1 bestseller in more than a dozen countries.

Recently, he also signed a mega-deal with Netflix as executive producer to develop 14 of his titles into movies or television series over a five-year period. The deal’s apparently worth quite a few million dollars.

When such a formidable figure in the publishing world releases a new title, then, readers are therefore expected to sit up and take notice. Which brings us to Win.

In this particular story with Win front and center, an eccentric hermit is found murdered in his New York City penthouse with two items apparently stolen years ago from Win’s family: a priceless Vermeer painting and a suitcase bearing Win’s initials that was a childhood gift.

Forced to investigate because of the personal associations, Win begins to find connections not only to the past theft of the Vermeer decades ago (along with a Picasso) but also to the kidnapping and rape survived by his cousin Patricia and the unsolved murder of her father, Win’s uncle, both of which occurred around the same time. When a link is also established to a 1970s domestic terrorism incident perpetrated by the so-called Jane Street Six, Win finds himself involved in a case with inescapable, if mysterious, personal ties.

While this author is well known for using events from the past to inform the structures of his plots, this one’s rather convoluted. The timeline’s a little tough to keep straight—which came first, the terrorist incident, the kidnapping, the murder of Uncle Aldrich, or the art theft? One should probably take notes.

And how on earth do they all connect to each other? Well, that’s the mystery, of course, but it’s tough sledding to get there. Back and forth, up and down, around and around.

As for our intrepid protagonist, while Win has been serviceable over the years as a foil to Myron, who’s generally intended to be likeable and reasonably normal, a full dose of Win on his own is another matter altogether.

The novel’s told in the first person from Win’s point of view, which is like 350+ pages of blunt force trauma inflicted on our sensibilities. Cast as an anti-hero, an irreverent know-it-all who doesn’t suffer fools gladly and has no patience for the feelings of others, Win is supposed to appeal to readers who have in the past enjoyed the rapier-like wit of popular curmudgeons such as Dr. Gregory House, Detective Evert Bäckström, and the modern television iterations of Sherlock Holmes, to name a few.

Instead, an inconsistently drawn Win merely grates on the nerves. Early in the novel, for example, he makes a big thing out of ridiculing the clichéd speech of other people, but as the novel progresses and Win finds himself in difficult positions he resorts to them—sometimes apologetically and sometimes unconsciously—just as much as the people he considers weaker-minded than himself. As a result, we spend the rest of the time obsessively watching for clichés and wondering if Win will make fun of the person using them or will slip up and utter one himself.

As Win would say, tedious and boring.

And as for the attention paid to Win’s sex life, which involves an app on his phone and discreet anonymous hookups (with women he ends up acquainted with anyway, for the most part), let’s just say it contributes to Coben’s development of Win’s character in a less-than-constructive way.

Win is the type of spin-off novel that will be wildly popular with Coben’s fan base as an extension of what they already know and love. As for the rest of you out there in the book-buying world, it’s your call as to whether or not it’s worth spending money on. As Win would say, “Articulate.”