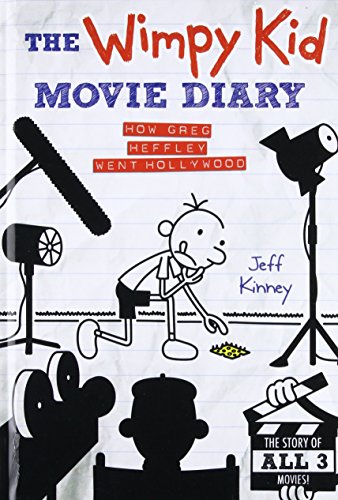 If you’re around kids, you’ve probably heard of Greg Heffley—the star of the Wimpy Kid series. Hands down, he’s the most famous children’s book character of the twenty-first century. With heart and deflated hope, he attempts to navigate middle school. Kids love him.

So you’d think that kids would be in a screaming frenzy about the upcoming Wimpy Kid movie (scheduled for March 19). Not the fifth graders in my life. Instead, they’re spewing panic: “The kid in the movie doesn’t even LOOK like the boy in the book!”

Good point. The Wimpy Kid in the book is a cartoon character that has the posture and girth of a noodle. He’s made of a few lines, a round head, and exactly three sprigs of hair.

Yet I understand their panic. To put a human face on the Wimpy Kid destroys his role of “everyman.” Or in this case, “everykid.”

Fortunately, author/cartoonist Jeff Kinney has written The Wimpy Kid Movie Diary. On the surface, it looks like a fun book about how the movie was made. And on one level, that’s exactly what it is. Kinney includes cartoons, photographs, scripts, props, and all sorts of behind-the-scenes information and trivia about how the movie was filmed.

But on another level, Kinney helps us make the transition to a human version of the Wimpy Kid. In fact, in the book’s introduction (“A Wimp Is Born”), Kinney writes, “This is the story . . . of how a fictional cartoon character became a real boy.”

On the first page, Kinney shows a “baby picture” of Greg Heffley: an early sketch of the Wimpy Kid from January 1998. He also shows a real baby picture (a color photograph) of Zach Gordon, the actor who plays the part of the Wimpy Kid. He was born just a month later.

Kinney also writes about set designers, make-up artists, “propmasters,” and the costume designers. In the process, he shows how a room or the choice of Greg’s clothing (i.e. too-small hand-me-downs) gives insight about his character. Again, it’s one more step in helping a cartoon character become a real boy.

But it’s not all about Greg Heffley. Kinney also delves into the human versions of classmates Rowley Jefferson, Fregley, and Chirag.

Despite all this stuff about character development, the big hit of this book will be the cheese. That’s right. The cheese.

If you’ve read Diary of a Wimpy Kid, you know all about the villain—an old slab of cheese that has melded itself into the playground. If you touch it, you’re socially dead.

In The Wimpy Kid Movie Diary, Kinney goes into detail about the audition (provolone, cheddar, and the eventual winner, a deli-cut slice of Swiss) and how the cheese was photographed for the movie and digitally reproduced on silicone. No joke, the Movie Diary has a full spread that shows four vibrant photographs of the progressively-colorful cheese. (There’s no question that these will be the most popular pages in the book!)

The Wimpy Kid Movie Diary is much more than cheese and glitz. When it comes down to it, Jeff Kinney is an amazing writer. Without a trace of information overload, Kinney moves from one topic to the next, gripping readers with content, voice, and humor.

Being a die-hard bookworm, I hadn’t planned on going to the movie. As we all know, it’s rare when a film captures a book character’s true soul. But I may change my mind. Kinney has provided a tempting foundation.