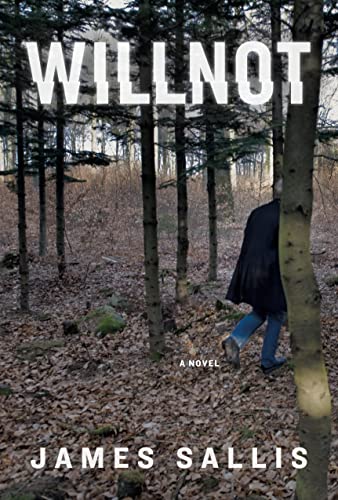 “Willnot isn’t the type of novel you’re expecting. It’s better than that.”

James Sallis sets the hook with his first sentence: “We found the bodies two miles outside town, near the old gravel pit.” He also makes you believe you know what kind of novel you’re getting into, because that sentence—musical but precise—calls to mind the other crime fiction you’ve read.

“They threw me off the hay truck about noon.”

“When a fresh-faced guy in a Chevy offered him a lift, Parker told him to go to hell.”

“I rode a streetcar to the edge of the city limits, then I started to walk, swinging the old thumb whenever I saw a car coming.”

But Willnot isn’t the type of novel you’re expecting. It’s better than that.

The book opens on the discovery of a makeshift grave in which three or four unidentified bodies are buried. Dr. Lamar Hale, our narrator, is called to the scene. Sheriff Hobbes and a few other folks are already there when he arrives. Dr. Hale engages in some conversation, it begins to rain, and the scene ends. We learn very little about what might be happening, but we know as much as Dr. Hale knows—and not the tiniest bit more.

In a different type of book, in the type of book the first sentence implies, we would stay on that scene for quite a bit longer. Our narrator would be the sheriff or someone else working the investigation. But James Sallis isn’t all that concerned with those bodies discovered two miles outside town, near the old gravel pit. They’re there. People will be looking into what might have happened to them. But none of those people will be Dr. Hale, and the investigation is only of peripheral concern.

As is the story of Bobby Lowndes, an old patient of Dr. Hale’s, who shows up one day while being pursued by both the FBI and an out-of-town journalist for reasons that are never made entirely clear.

Instead of chasing down these threads, Dr. Hale takes us through his daily life, dealing with patients at his office, performing occasional surgeries, making house calls here and there. He takes us home, introduces us to his partner Richard, a school teacher who’s made a habit of rescuing animals, including a cat named Dickens, who has a tendency to vomit in bed.

Lamar and Richard fix meals for each other and discuss what happened at work, as couples do. You get the sense that they’re well established, comfortable with each other. This is not a relationship that will burn up in its own passion; it wears house slippers and sips warm tea.

All of this may sound mundane, and in a way it is—readers looking for a Dan Brown-style thriller will be disappointed—but that mundanity, as in a David Lynch film, is a thin membrane that could break at any moment, revealing a much darker reality, or unreality, on the other side.

Lamar Hale’s narration of his everyday life, combined with occasional references to the bodies found outside town and the story of Bobby Lowndes, creates a strange feeling, not unlike walking down the street at night and thinking you might have glimpsed something dangerous from the corner of your eye—just across the street. Nothing is wrong, nothing has happened, but you feel uneasy all the same; you feel that something might happen at any moment.

And when it does, when the darkness finally intrudes violently into Lamar and Richard’s life, that violence is all the more affecting for the way the reality into which it’s intruded has been set up for us: These are people we care about.

Willnot isn’t a perfect book and, as suggested above, readers looking for a thriller will be disappointed, if not bored, but it’s a powerful read all the same. If your average workaday crime novel is beer, then Willnot, at half the length, is whisky, distilled down to its essence and all the more potent for it.