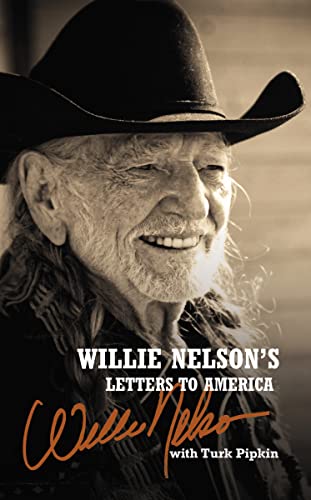 “Partly autobiographical, often funny, and entirely insightful from a cannabis-loving man who’s fully experienced every one of his 88 years, Willie Nelson’s Letters to America is a beautiful read for all.”

What did Willie Nelson do during the pandemic aside from write songs and plan future gigs? He wrote this book, in the form of letters he’s written to people in his life, some he would have written if he could, and some about favorite songs he’s already written. Included are lyrics of many of Nelson’s masterpieces.

During Covid-19, Nelson has had much time to contemplate current events. Always known to speak his mind, he thought, “ . . . we need to get our shit together and remember the ways we are alike rather than focusing on the ways we’re different.”

He reflects on his love for his sister, Bobbie, who plays piano in his band, for his exes and current wife, and for his eight children, grandchildren, and great-grandchildren. Some of his favorite songs are gospel classics, many of which he’s recorded.

Nelson was raised by his grandma and grandpa, as his parents abandoned the family when he was young. Bobbie and Willie picked cotton and baled hay as children. Grandpa bought Willie his first guitar when he was five.

At 19, he married his first wife when she was only 16 and they soon had two daughters and a son. Willie DJ’d and played in a band, but they never had enough money.

Eventually the hits rolled in, though some of his marriages failed. His advice to budding songwriters . . . don’t give up. “Listen to the sounds and the thoughts that are passing through you.” Willie’s first royalty check, $25,000, was for “Hello Walls,” a lot of money many years ago.

In 1969, Nelson’s house in Tennessee caught fire. Everyone was safe but he ran in, concerned about losing a pound of pot and his guitar. Once, he got busted for pot and had to sing his way out of jail.

Willie believes marijuana will be legalized in all 50 states within ten years. As he says, “They say we tour the county in a cannabus!”

“Red Headed Stranger,” was a lullaby Nelson sang for his daughters. “Sure, it was about a man who shot a lady for trying to steal his horse, but I guess that’s my kind of parenting!”

One of his letters begins, “Dear COVID-19, fuck you!” Nelson’s missed being on the road during the “pandammit,” “pandumbit” and “pandangit.” He missed his annual Farm Aid concert—which he started in 1985—but held it virtually in 2020 and made $1 million for farmers.

The best advice from the 88-year-old sage is “remember the Golden Rule and treat everyone how you want to be treated.” And after over three million miles, Nelson, as he says in one of his most famous songs, “can’t wait to get back on the road again.”

Partly autobiographical, often funny, and entirely insightful from a cannabis-loving man who’s fully experienced every one of his 88 years, Willie Nelson’s Letters to America is a beautiful read for all.

Dear Mr. Nelson, would you please write ME a letter?