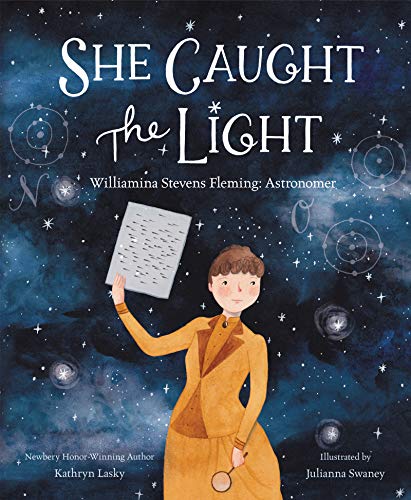 “An important addition to the growing collection of picture book biographies of women you should know about but probably don’t.”

Kathryn Lasky does a beautiful job of presenting the story of Williamina Stevens Fleming, the first woman to join what would become known as “Pickering’s Harem,” the group of women cataloging stars by spectrography under the guidance of Professor Edward Charles Pickering in the late 19th, early 20th century at the Harvard College Observatory.

Describing Mina’s careful work, Lasky writes: “It was as if each star had a different personality, and this was what puzzled and excited Mina the most. The differences . . . Mina wanted to sort them out like puzzle pieces—these little pieces of heaven’s puzzle. She began to classify them into an order that would show how one star differed from another.”

Julianna Swaney’s illustrations capture the sweep of the heavens as well as Mina’s day to day life, reserving a lively line for drawing people and luscious watercolor washes for the star-strewn sky. The combination works well together, providing the perfect visual contrast for Mina’s personal life and the stars she studied.

Together Lasky and Swaney show how a “Scottish maid” used her native intelligence (no college education for her, of course) to read the prisms “caught” by the spectroscope. Some of the scientific descriptions may go over the head of the targeted age group (four year olds will struggle with much of the vocabulary here), but the gist of the story remains clear. If you are curious and try hard, you can reach the stars, as Mina does here. This is an important addition to the growing collection of picture book biographies of women you should know about but probably don’t.