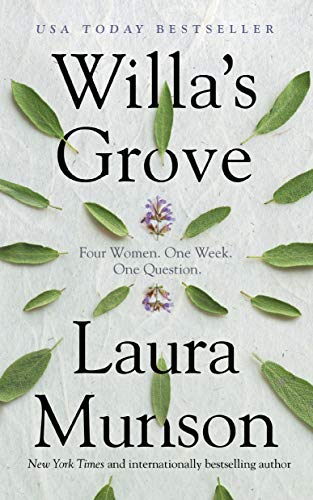 The format of this story is a familiar one in character-driven novels: multiple people gathering in an isolated place removed from their daily lives, spilling their secrets and changing their relationships and sense of themselves.

Willa’s Grove offers a fresh slant on the scenario. The title character happens to own a town: Willa, Montana, complete with its own zip code. Willa and her husband built it from their dreams and created an almost-paradise in a remote corner of the harsh West.

The couple not only supported the townspeople through their enterprise but also drew in outsiders to live their dreams, too—albeit temporarily—at Willa and Jack’s inn. The combination let the couple support their family through their own labors on the land while underwriting the town.

The story problem starts after Jack drops dead of a heart attack way too young. That leaves Willa unable to sustain their business and town single-handedly. It also leaves her stone broke, as the money she thought Jack had socked away has mysteriously disappeared.

Their sons are away at college and can’t help. Willa is so lost in grief that she rejects the townspeople’s efforts to help. Her rejection alienates them, to the point they turn hostile when she decides that her only choice is to put the town up for auction.

Enter Willa’s best friend, Bliss. The women have long been separated by time and distance, but the thread that still connects them prompts Bliss into goading Willa into hosting a send-off prior to the auction.

It happens that Bliss’s life has fallen apart, too. And one of her close friends is in the same boat. One of that friend’s close friends is in similar straits. So Bliss persuades Willa to send out a formal missive to them—“You are invited to the rest of your life”—hosted at Willa’s soon-to-be-ex home in Montana.

Since all four of these women are emotionally paralyzed by desperation, they accept the weeklong last chance to change their fates. Not surprisingly, each woman is as different as the cardinal compass points in personality and circumstances. They share external success in their own realms but have discovered “you can’t really belong to anything with any level of authenticity if you don’t belong to yourself.”

Willa is immersed in the land and caring for family and community. Bliss craves the child she can’t have; a cruel irony, knowing that her purpose in life is to create and nurture a family. Harriet—a woman “with a map of hard road on her face”—is a celebrity women’s empowerment leader who knows deep inside she’s a sham. Jane is a super-mom, super-wife, and super-organizer racing constantly to maintain an impossible standard of conformity and wealth.

Internally, each woman is quivering in regret, indecision, and fear. During the week at Willa’s, they agree to utter honesty and confession as a means of dispelling what constrains them (“Supposed to should be abolished from the English language. That’s what got us all into trouble to begin with”). At the same time, they brainstorm about what their new lives might look like, and give one another the courage to advance toward their individual futures.

The narrative leaves little doubt that they will attain those brighter futures and emerge as stronger selves. Suspense comes from the questions of how they will do it, and what will happen when Willa’s property comes up for auction. There, we get some surprise to the ending.

This novel is intended to be an inspirational story, and it delivers. Many women readers will find themselves represented by one or more of the characters, who ask, “Why do we think that we have to go it alone in order to be strong? And why do we think we need to save anyone but ourselves? . . . Why do we think we have to be so independent? Or that needing someone makes you codependent? . . . We need community. . . . we are fluent in that language. But we don’t speak it enough.”

Men, too, can learn from the characters’ experiences. They might come to understand the women in their own lives better, as well as find their own secret anxieties represented and tackled through the story.

All readers will receive this message: “Our stories change, you know? And I think we forget that. I think we lock into a certain time in our lives and memorize it and live by it. But when we tell our stories out loud, we can hear what’s true. . . . Maybe that’s why the four of us are here. To unmemorize our stories. . . . Or at least to write new ones.”