Will AI Replace Us: A Primer for the 21st Century (The Big Idea Series) 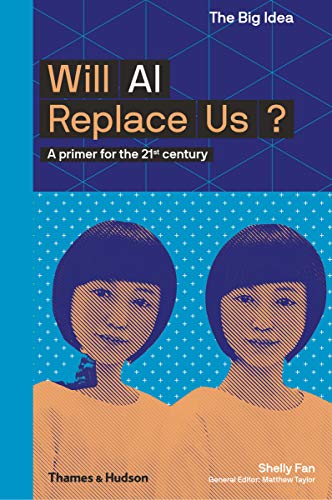 From social media to Netflix AI has already infiltrated our daily lives. . . . Are we on the threshold of an AI dominated reality? . . . Will humans be superseded by AI?

Sometimes a book surprises us, not by its topic or content, but by its format and presentation. Will AI Replace Us? A Primer for the 21st Century is part of the Big Idea series, which is quite different than the typical book about computers, technology, and other topics. It is relatively short (136 pages), is inexpensive to buy and can be read in under two hours. What is most surprising however, is that in addition to 50 to 60% text on each page there are multiple illustrations and pictures (160+ in 136 pages). It is by no means a comic book. The illustrations serve to elucidate the text. Think of it as a TED talk with a PowerPoint presentation in print.

Another difference is that the text is printed in different types and font sizes. The publishers suggest that the larger the font size, the more important are the words to the overall concept or argument. They suggest that it you only have 30 minutes to spare, just read the paragraphs set in the two largest font sizes and one will still get a basic overview of the subject. If you have more time, read all of the text to receive the subject in depth. Perhaps the only critique to be made of this format is that the captions for the pictures are written in such small type as to be almost unreadable without magnification.

As to the concepts in the book itself, the text seeks to answer the question, Will computers become so sophisticated using artificial intelligence (AI) that humans will become irrelevant or replaced?

Much of the book focuses on the development and capabilities of AI, its limitations and problems and ultimately, its future. The concern of many citizens, that computers will rob us of our jobs is downplayed in the text. Much as in the machine revolution of the 1800s and 1900s, jobs were not all replaced, but individuals were made much more productive and new job types were created.

Fan believes that sophisticated computers will augment our jobs and our lives. In her view, the future of AI is closely linked to the future of mankind and how successfully or unsuccessfully we manage the social, economic and geopolitical challenges in front of us.

In summary, she suggests that “if we retain an open mind and allow AI systems to develop under the supervision of scientists, policymakers, social scientists and users, AI will not replace us, although it may profoundly transform humanity for the better.”

Because of its ease and speed of reading, there is little doubt that this format will appeal to most readers. We have become accustomed to speed in our computers and mobile phones. This series will delight those individuals who wish to understand a relatively deep subject such as AI in a short period of time. It delivers what it promises, which is a rapid reading making a difficult subject easy to understand. If one wants a more in-depth look at a similar topic one should read How Smart Machines Think by Sean Gerrish or Hello World: Being Human in the Age of Algorithms by Hannah Fry.