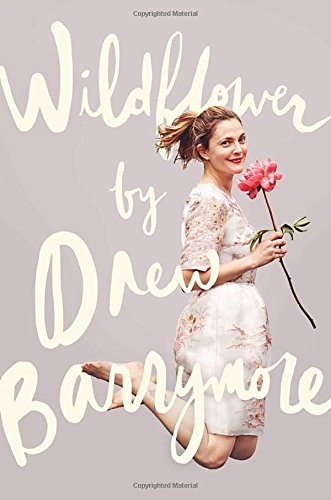 “a very enjoyable addition to this year’s crop of Hollywood memoirs.”

God knows it would be churlish to not like Wildflower, the new collection of life lessons that more or less comprise a memoir by Drew Barrymore. True, there is a distinct Lorelei Lee aspect to the syntax (example:  “Lee Strasberg was one of the most important and famous acting teachers ever to live.”), but surely that is trumped by the fact that she is, always and forever, our Gertie, the little girl who played dress-up with an alien, and charmed the world with a single, ear-piercing scream.

The reference here is to E.T., of course, although she would come back to shriek once more in the iconic opening sequence of the movie Scream and would, in the time between these films, between her childhood and her adult acting career, languish as the Lindsay Lohan of the ’80s—her life a cautionary tale of what happens to Hollywood’s children.

As the granddaughter of stage and early film actor John Barrymore, and the grandniece of both Lionel and Ethel Barrymore, Drew Barrymore, in our imaginations at least, was raised as Hollywood royalty, dressed as a princess, lived in a mansion, had tutors, chefs, and pool boys all at her beck and call.

The reality was that Barrymore was the child of a single mother, Ildiko Jaid, as she was then known, who herself had dreams of stage and film acting, attended the Actor’s Studio, and was the force behind her child’s career.

About those years, in which she and her mother lived in a duplex in West Hollywood and drove to auditions in their ancient Volkswagen, Barrymore writes:

“These were happy years, the most stable years I’d ever had. We lived in this house for seven years, all the time I could remember. But when I turned seven, after E.T. had premiered and I was starting to get a lot of other film offers, my mother’s and my life were changing. I will never forget one night when we were all waiting to go to dinner together at the duplex, and my mom pulled in with a brand-new BMW 320i. I couldn’t understand. Where was the beat-up Karmann Ghia? What was happening?”

Her father was John Barrymore’s only son, John Drew Barrymore, who, in his People Magazine obituary, was referred to as a “sporadic actor.”

In a chapter about him and her relationship with him, she begins simply:

“My dad. I don’t really know where to begin other than to say he simply wasn’t a ‘dad.’”

Describing a moment in her childhood when he suddenly appeared at the door, she writes that he was “more someone you would be trying to keep out than allow in.”

And she sums up their relationship with: “For as long as I knew him, or barely knew him, he was always coming from somewhere and going somewhere else.”

Of her parents’ relationship, she writes:

“The truth is I never lived with my father. I never even had a dinner with both my parents. I never knew the whole story of how my parents met and got together . . . They had a tumultuous few years together and then separated before I was born.

“My mother and father were both incapable of being parents, and I don’t fault them for it. My therapist would disagree, but the truth is they gave me a great blueprint through their behavior of what not to do with my own kids. For starters, I will have so many thousands of dinners with my kids.”

With such an upbringing, it seems unsurprising that Barrymore had a rocky road toward adulthood (which she wrote about in great detail in a previous memoir, Little Girl Lost).

“When I was fourteen, I was emancipated by the courts. It’s no secret that I had to part ways from my mother because we had driven our relationship into the ground. She had lost credibility as a mother by taking me to Studio 54 (so wrong but so much fun) instead of school.”

Then she gets all Lorelei Lee again:

“And I was out of control due to working since I was eleven months old and what that had done to my childhood, which made me grow up too fast.”

The language gets murky, but the life recounted fascinates. Barrymore attempts everything from renting an apartment to doing her laundry and getting an education (she ultimately opts to educate herself: “I read books by Tolstoy, Jane Austin, Joan Didion, Bukowski, John Fante, and Kurt Vonnegut. The Fountainhead. To Kill a Mockingbird. I read everything”) and finds herself lacking in the everyday skills that most of us take for granted.

And having once been a child star of the highest magnitude, she ends up working in a Hollywood coffeehouse, at least until the boss finally wearies of her incompetence and suggests, through clenched teeth, “Why don’t you go out and find yourself.”

In most other True Hollywood Stories, the faded child star continues the spiral downward well into adulthood, and ends up living in obscurity—unless fortune smiles and the ex-star become a Real Housewife.

But perhaps the most remarkable thing about Drew Barrymore is that, even as a child whose only claim to adulthood was the legal status bestowed on her by the California courts, she had the wherewithal to work her way back into Hollywood’s good graces, even after having crashed and burned on several very public occasions.

She credits Steven Spielberg, who brought her to the attention of the American public when he cast her in E.T., both with taking on the role of surrogate father when she was a child and with helping to turn her life around.

By memoir’s end, Barrymore is married (for the third time—the first two go unmentioned in this volume), the mother of two daughters, a film producer with a startlingly good track record, including Charlie’s Angels, an actress who has played roles from a child who divorces her parents in Irreconcilable Differences (her follow up to E.T.), to Edie Beale in HBO’s fictionalized version of Grey Gardens, head of a company that makes beauty products, and the owner of the Northern California vineyard that produces Barrymore Wines.

All from the girl who started working before her first birthday, became a movie star at seven, a legal adult at fourteen, an obscure has-been by 16, and experienced what she calls her “mid-life crisis” at 25. Now, at 40, she must have enough material for a series of memoirs.

Wildflower is told in broken narrative—as if Drew Barrymore were sitting across from you in that Hollywood coffeehouse, spilling out her memories to you. The chapters fly by in a manner that is at once utterly erratic and oddly poetic.

At the beginning of each chapter is a photo of Miss Barrymore, and, from the pictures selected—a chubby little Drew attempting to wow them at ballet class, a scarily thin picture of her during her lost years, an endearing picture of her as a child clinging to Steven Spielberg apparently for dear life—she is more dedicated to memory and truth than she is to glamor and fame.

After all, who else but Drew Barrymore could spend a whole chapter giving a detailed account about the time she took her top off while dancing on David Letterman’s desk, or share this with her readers:

“When I was seven years old, I went on The Tonight Show for the first time, and when I walked out to go up on the stage, I slipped and totally ate it. I think that was the first time I recall feeling humiliated. People said it was cute. But inside I knew I simply couldn’t put one foot in front of the other as well as I should. But I had no idea that I would endure a lifelong incapacity to ever be cool.”

Maybe the best thing about Drew Barrymore is that, even now, as her memoir suggests, she is still our little Gertie, the girl who loved an alien. She’s a bit otherworldly herself. Still as self-effacing, as adventuresome and thoughtful as ever. And that’s a good thing.

Wildflower will likely win no writing awards. And, God knows, the reader wonders if she had an editor for this memoir, and, if so, where that editor got to when the book was being prepared for publication.

And yet, because of its author’s candor and charm (a powerful combination), it is a very enjoyable addition to this year’s crop of Hollywood memoirs.