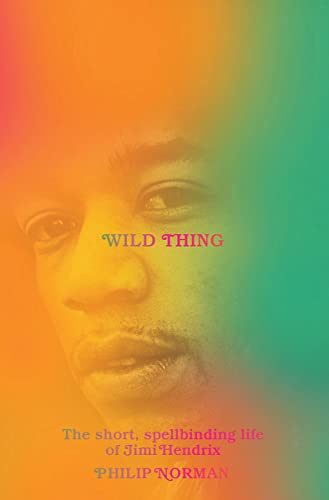 Philip Norman has tackled some interesting luminaries of the golden age of rock and roll. He wrote one of the very first books about The Beatles (Shout) that got inside the group’s dynamics and then followed that up with biographies of Mick Jagger, Elton John, Buddy Holly, and John Lennon just to name a few.

Norman knows an interesting character when he sees one but, sadly, he misfired when deciding on Jimi Hendrix. Even a fan of the great guitarist, after reading this book, would conclude the man himself is not that interesting. That’s not to say Jimi’s life and career wasn’t “spellbinding,” as the title suggests but Jimi, as a man without the guitar, was kind of dull and drug addled.

Wild Thing—Norman’s treatise on Hendrix—succeeds when it examines the creation myth of Jimi, exploring how he became the acknowledged greatest guitar god of all time. The problem with the book is the hole at the center of the story. It appears from this reading that Hendrix himself had nothing interesting to say. To give you an idea, some chapters are titled after things Hendrix said like: “Hey man, lend me your comb” and “Just call me helium.” Hendrix was no John Lennon.

But there’s no doubt Hendrix could play like Johnny B Goode. He was a complete natural, an intuitive player. He heard music in his head as a young man, got himself a guitar, and the rest is history. The downside is that he never seemed to learn much beyond that intuitive playing. One producer and fellow guitarist is astonished at some later point in Hendrix career to find that the great man knew nothing about music theory.

It may seem to the casual rock fan that all the gods of rock were such creatures, but you only have to compare this Hendrix bio with, say, Pete Townsend’s memoir Who I Am to see how wrong you’d be. Townsend seems to have never let a day go by without considering his guitar playing in terms of song writing and art and inspiration. Townsend was always thinking!

It’s possible Hendrix was also thinking about his career in the same manner but, if that’s true, then this book has failed its subject. We know Jimi became more and more obsessed about every track as his career went on and envisioned the Electric Lady Studio in New York, but we’re missing the essential elements that might make Hendrix appear interesting.

Here’s one of the major takeaways from reading Wild Thing: Hendrix had more sex with more beautiful women than any man alive (except possibly Mick Jagger) and, while he was at it, did boatloads of drugs.

One of his bandmates tells the story of how, as they were about to go on stage, he did two tabs of acid. Jimi responded by doing four. That’s a lot of LSD even for someone with as prodigious an appetite as Jimi. There were times, such as a notorious Madison Square concert, when the drugs caught up with Hendrix, and he simply could not play.

We’re told Hendrix was a gentle gypsy soul with a sense for fashion and off the charts guitar talent but, aside from the sex and drugs, that’s about it.

Hendrix owed his discovery to one of the women who loved him—Linda Keith, then Keith Richard’s girlfriend. Keith was out on the road, and Jimi was so poor that, at that point, he could not even afford a guitar. Linda snuck into Keith’s hotel suite and took one of his guitars, which she gave to Jimi. He dazzled as he mostly did when he took the stage and Chaz Chandler, the bassist from the British group The Animals, spotted him and took him to London where Jimi’s career took off.

Before London, Jimi played backup for very well-known American musicians including Little Richard, the Isley Brothers, and even Ray Charles but after all those acts and all those years, he did not make an impression in America. He lost a lot of jobs for one reason or another and was floating along in life like a cork in a river.

It wasn’t until Chandler took control of Jimi’s life that his career took off. The musician introduced him to the rock’s royalty including Eric Clapton, the Beatles, Pete Townsend, and others. As Jimi made a name for himself as a guitar god, Chandler created the Jimi Hendrix Experience, pairing him with Noel Redding and Mitch Mitchell.

For sure, Jimi’s songwriting ability carried the group to great heights and a string of hits. If this book shows anything, it’s an example of how a great manager can take raw talent and forge a career. Without Chandler, there’s every chance no one would ever have heard of Jimi Hendrix.

The end of Hendrix’ life is almost too sad to rehash. He was falling more and more into a drug malaise and had something of a death wish. He often said he’d be dead before he was 30 years old, and he died at the age of 27. According to the book, Jimi may have killed himself by ingesting a handful of very strong German sleeping pills. He left some writing behind that read like a suicide note, but whether he intended his death remains a mystery.

The best part of this book is how Hendrix became Hendrix, how this poor kid from Seattle somehow etched his name in the rock history books. Once he hits the big time with his first album and then the masterful cover of Dylan’s “All Along the Watchtower,” his story devolves into a long, uninteresting drug haze.