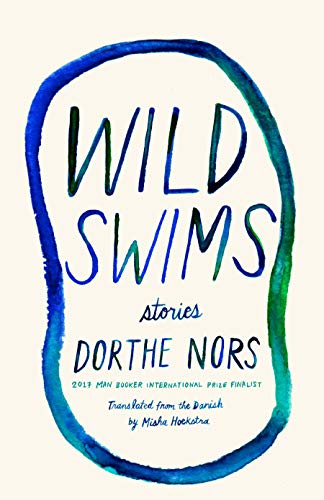 Dorthe Nors’ Wild Swims is a collection of 14 short stories written tightly and tensely, with most under a thousand words.

“It’s a question of time. Sooner or later, somebody will show up. Even dirt tracks like these can’t stay deserted forever. The farm he passed when he entered the area must be inhabited. The people who live there must go for walks sometimes. And the deer stand is probably the farmer’s, and it’s just a question of time before it starts raining. The vegetation on the ground is dry. Some twiggy bushes, some heather too. To the right, a thicket; to the left, the start of a tree plantation. The dirt road must go in there for a reason, so someone comes here now and then.”

Scene set, the fun will soon begin, in this case, with clues for tension, details to pull you into the tale and make you care.

“Take him, for instance, he came this way. Just yesterday, even if it feels longer. The circumstances make it feel longer. It’s likely that his ankle’s broken, though it’s also possible that it’s just a sprain. The pain isn’t constant. There is some swelling.”

And then, a shift, darker and Danishly so, just in case, just before you decide there’s nothing to see here and move on.

“Now he sits here and he has no phone. She must be in pieces back home. He can imagine it. Walking around with his phone in her hand, out in the utility room. She’s standing there with it in her hand. She curses him for not taking it. He supposes the police will be involved soon. Maybe they already have been for some time now. It’s probably been on the local radio; that he’s 47, that he drives a BMW, that he left home in a depressed state.”

You feel it, right? Your reader’s alert flag popping up to suggest there is no easy reason for “he” to be in a deer stand with no phone? That he didn’t just get lost on his way to the store?

“He can’t bear the thought of them saying those last words. She just wasn’t supposed to win every battle.”

And now, of course, you must find out, everything. Especially all about this woman who is always winning . . . what exactly? This woman who might live the rest of her life blaming herself for something terrible and it is why you need to know. Was he right? Was she the terrible person? Was she really always “winning?”

That is how Nors does it. Meaning and moments expertly burrowed under sentences so clean you thought they were transparent, until meaning is conveyed from under them and you are surprised, moved, lifted.

Nors is, of course, an experienced storyteller, a finalist for the Man Booker International Prize, author of several novels, novellas, story collections.

Enter Misha Hoekstra, who succeeds here at translating the (classical overture?) soundtrack of Wild Swims. Thanks to her, its melody remains true and travels and captures and satisfies and maintains the elegance of Nors’ previous work.

Take the title story, for instance:

“I walked slowly around the fort, looking at the flowers and the water in the moat. It has its own geography, the water, and certain places were choked with duckweed.”

Or the devastating, “On Narrow Paved Paths.”

“There was smoking in the yard, and here Alice explained to the circle what had happened in Einar’s last days, and what they should remember to be thankful for: that it went quickly, that he’d been free of pain, that the cat had found a new home. Then each of them departed, ready to face their everyday cares once more, and around eleven on that first evening of Einar’s everlasting life, Alice plopped down in front of the window by her kitchen table and felt empty inside. A small wren bobbed in the yew beneath the windowsill, and Alice felt as if she were hungry. But no snacking now, she told herself, and then she took out her notebook, wrote Einar buried, the cat put down, good one can be of assistance, and turned out the light.”

It’s how these stories fish us, pull us out of sweet water, sometimes gasping for air. Read together, they are addictive, especially now when we are so hungry for travel and they offer to take us through Copenhagen, Los Angeles, London, even the Minneapolis that serves as the site of a story.

And yes, the characters in Wild Swims appear flawed at first, because they are. But very soon, they reveal themselves to also be just people in pain, or beyond it, and we have a sense that these stories tell of the precise moment in which they realized something important, the moment in which the meaning of whatever is everything to them became clear, and a decision about nothing less urgent than the question of whether to live life, and if so, how to live life, was taken.