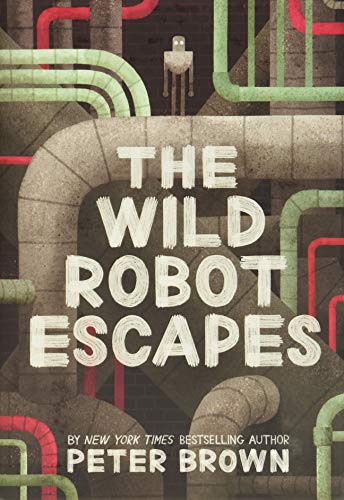 It is a difficult task to dive into the sequel to a book that received universal praise and many starred reviews without having read that first acclaimed book. In this case, the beloved book is The Wild Robot, Peter Brown's first middle-grade book about a robot named Roz. The second book, just out, is The Wild Robot Escapes.

So the opening chapter of The Wild Robot Escapes is doubly disappointing. The first few pages describe a truck getting onto the freeway, driving on the freeway, getting off of the freeway, driving through the countryside, and finally making a delivery at a farm. If this sounds boring, that is because it is. This whole admittedly short (but not quite short enough) first chapter should have been cut. It adds nothing to the narrative, nothing to character development, not even much to setting the scene. So why is it there?

The question gets at the crux of the problem with the book. On the heels of huge successes, writers tend not to be edited. This book suffers from a lack of editing throughout. Besides the first chapter which should have been cut, the long middle section of the book, where Roz, the robot, escapes from the farm with her adopted son, a goose named Brightbill, feels episodic and cliched. There are the obligatory chase scenes, the necessary near-misses, none of them with any real drama or emotional weight.

The effective parts of the story are those that grapple with complicated issues, like what gives a person their identity? Is Roz still Roz when her “brain” is put into a different robot shell? Does Dr. Molovo, the scientist who designed and built Roz, have the right to turn off Roz? Is Roz a danger to humans because she asks questions?

To get to those questions, though, the reader must plow through a long series of events that lack both narrative drive and character development. A key question writers should be asking themselves about each chapter is how does this section move the story forward? With the long escape sequence, the chapters could be shuffled and reordered with no real change in how the story proceeds.

The first part of the book where Roz works on a farm owned by a single father and his two children, the obligatory boy and girl, feels similarly cliched. What happened to the mother? How do the kids feel about farming? Their characters are vague, with no distinction between Jad, the boy, and Jaya, the girl. Even the cows, who could have been brimming with character (think of Denys Cazet's Minnie and Moo books) are thinly drawn.

There are big issues lurking under the story, questions about artificial intelligence and its place in our world, but they remain background shadows to a story that is simply a long escape saga in the vein of Odysseus returning home to his island with none of the magic or adventure expected in such tales.

Readers who love the first book will probably be happy to be reunited with a favorite character, but those new to the series may choose to read Pax by Sara Pennypacker instead. That book is a satisfying example of the love between a person and a wild creature and the different forms families can take, with a similarly shadowy dark background—of war, however, not technology.