The Wild One (A Peter Ash Novel) 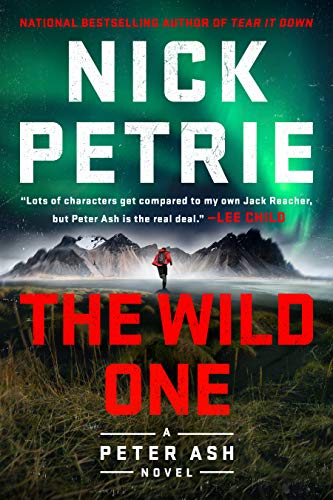 "Nick Petrie takes you on a joyride, racing first in one direction then spinning off into another. Just try to catch your breath!"

Nick Petrie has written another gritty, action packed thriller, this one set against the plummeting waterfalls, barren mountains, and eerie geothermal hot springs of Iceland.

Recently returned from tours in the Middle East, hero Peter Ash brought with him a life altering PTSD that manifests itself in debilitating claustrophobia and fearsome panic attacks. He spends a lot of time in his own head fighting a godawful nerve jangling buzzy white static whenever he's not outdoors.

Against his better judgment, he boards an airplane for a trip to the unwelcoming backcountry of that exotic land in search of Oskar, an eight-year-old boy who has been taken away following the murder of his mother. Oskar's father Erik is the prime suspect, and wealthy grandmother, Catherine Price, wants Erik captured and punished, and Oskar brought back into her custody.

Because of the PTSD, the plane ride to Iceland nearly kills him.

". . . that feeling of electric overdrive that sparked up his brainstem, calculating firing angles, searching for exits. . . . His chest so tight he couldn't breathe, his fight-or-flight reflex gone into overdrive. . . . he could only handle twenty minutes before the static turned into a full-blown panic attack.

"He got up and went to the tiny restroom and splashed his face with water . . . On his way back to his seat, he plucked two more mini vodkas from the flight crew's service area and tossed them down in one go. . . . pills alone had stopped working months ago."

As if that isn't enough, he's inexplicably detained and questioned at customs by uniformed agents who collect his passport and lead him away. He's ultimately released on a 48-hour stay by the Icelandic National Police Commissioner, still with no explanation.

This gives him just two days to find Oskar and Erik.

His search begins at a Reykjavik nightclub called Snorri's Rave Cave. His only clue, a name. Bjarni Bergsson. The author puts you inside this club with brilliant writing:

". . . at the bottom of the steps he found a large high-ceilinged space, several large rooms connected by wide arched openings. The basements of multiple adjoining buildings had been dug deeper and merged. The original rough foundation stones were exposed, but they somehow stood atop crisp new concrete walls, the lines of the steel forms still visible. Standup tables ringed the room. Rope lights hung from the ceiling in wild, tangled loops. . . .

". . . The dance floor was huge. Concrete mixed with broken glass, then polished to a fine sheen, glittered underfoot. At the far end, a DJ with a shaved head and a long, braided beard assembled his equipment on a raised platform. The heavy bass and insistent rhythms of electronic dance music poured from high speaker towers."

Before long, Peter finds himself on the crowded dance floor, high on a nightclub drug slipped into his drink, performing frenzied moves and stripping off his clothes down to his long underwear:

". . . He felt connected to the crowd like he never had before. . . . His feet and hips and shoulders flowed like liquid. The dance floor was a temple to a God he'd never imagined might exist.

". . . part of a group now, all swirling together in the pulse of music. . . . women swung their hair, arms in the air, and the men spun on the toes of their smooth soled shoes. Everyone wore the colorful glowing bracelets or necklaces or held swirling glow sticks, which trailed light behind them like tracers in the night. . ."

All this merriment ends in a horrendous beatdown in the back alley where Peter fights off two guys, one of them Bjarni himself. Peter survives, but later on his unrelenting search for the little boy takes him right back to Bjarni, and another beatdown, this one administered by cops.

Nonstop action keeps readers thoroughly engrossed while at the same time they delight in the characters, and descriptions of mysterious Nordic landscape vistas, but they'll tangle their tongue trying to pronounce Icelandic names, Hjalmar, Bjarni, Yrsa, and places, Seydisfjordur, Egilsstadir, Vatnajokull. Thankfully, the author has included a two-page pronunciation guide.

The story moves sloppily back and forth between past and present requiring a bit of rereading, but that's a minor flaw that doesn't necessarily detract from the fabulous writing and engrossing story. Readers will need to pay extra attention to time and place as they turn the pages from chapter to chapter.

The author includes a minor love interest subplot, but thriller reader purists will see no reason for a romance story line in books such as this. (Perhaps the editor insisted on it.) In an interview, the author claims his character longs for a romantic relationship, but Peter Ash is destined to be a loner. Not many women would put up with his quirky idiosyncrasies.

He's a wanderer, always on the move, compelled to stop bad guys. Fight or flight energy always pushing at the limits of his self-control. He sleeps in his car because he can't abide the confines of an enclosed room. Constantly struggling with his PTSD, he experiences panic attacks when he's indoors, and can't even drink a cup of coffee unless he's at an outdoor table. Friday night Netflix bingeing snuggled up with a woman is not in his wheelhouse.

Nick Petrie takes you on a joyride, racing first in one direction then spinning off into another. Just try to catch your breath!