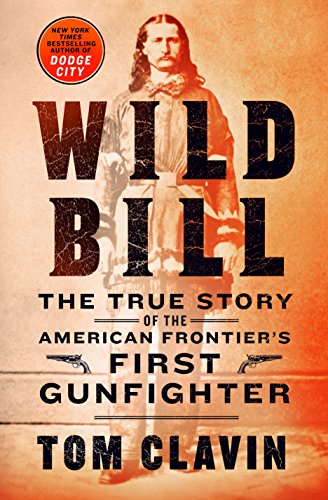 "Clavin sets out to sort facts from popular legend and 'it was a delight to discover that the truth' 'can be at least as dramatic and potent as its fabrications.'"

Tom Clavin provides a sort of prequel to his Dodge City with a biography of James Butler Hickock. "Before the heyday of Wyatt Earp, Bat Masterson, and Doc Holiday. . . [Hickok] was arguably the most iconic of all" and "one of the most intriguing figures in American history".

As with his Dodge City, Clavin sets out to sort facts from popular legend and "it was a delight to discover that the truth" "can be at least as dramatic and potent as its fabrications." He begins with a discussion of earlier books, works like Wilstach and Connelley that mix fact and fiction, and Rosa who wrote "a somewhat mind-numbing saga of facts and disclaimers and rebuttals."

Born in to an old Warwickshire, England, family that settled in Connecticut, Hickok's "prolific and lusty" ancestors knew Shakespeare and his cousin was the famous Union General Benjamin Butler. He came into the world as the fifth son of William and Pamela Butler Hickok in Homer, Illinois, on May 27, 1837.

Hickok's parents moved several times "but none of these towns, though, were yet considered free of danger." He came along at the beginning of the national economic panic of 1837 "no quick-hitting economic attack." His father, a sickly, former theology student and failed storekeeper, used his farm to hide escaped slaves from "kidnappers and bounty hunters."

Hickok grew up an orphan on the frontier, loving hunting and "tales of adventure, featuring Daniel Boone and Kit Carson." He moved to Kansas to set up a farm. His father having been an abolitionist, he was eventually drawn into James Lane's "Free State Army" that opposed slavery in the territory.

At that time, Hickok met the younger William (later "Buffalo Bill") Cody and the older Kit Carson, while he went to work as a frontier teamster that while it "did offer adventure, it was hard work." "He was simply a young, adventurous man like many others on the American frontier."

Hickok did have adventures. He survived an attack by a bear, guarded wagon trains, worked for the pony express, fought Indian raiders, killed men in gunfights, chased women, served in the Civil War (often as a spy), scouted for the army with the Buffalo Soldiers, served as a lawman, rode with General Custer, and became a successful actor playing himself as the celebrated "Wild Bill."

Hickok won the first quick draw gunfight on July 21, 1865 at age 28, killing his former friend Davis Tutt over the Civil War, debt, a game of cards, and a gold watch. In that and his many later killings, "he never sought confrontations and had no need to prove his reputation."

Harper's carried the story of this new kind of a duel 18 months later. Hickok became a nationally celebrated "shootist" and "a marked man" of whom "many men with six shooters on their hips would measure themselves." He won every time before his murder on August 2, 1876.

In declining health, Wild Bill Hickok died at only age 39. Contrary to the claims of the famous Calamity Jane, he barely knew her "and could barely tolerate her presence." Hickok may have started the Wild West Show, but he never performed in Buffalo Bill Cody's troupe.

Throughout the book, the author often has little to write about Hickok and fills most of the text with background on the people who passed through the gunman's life "and deserve a detour here." The copy editor did not let formal grammar interfere with the author's colorful and entertaining prose. Wild Bill has no annotation, but it does have a bibliography.