The Wife Stalker: A Novel 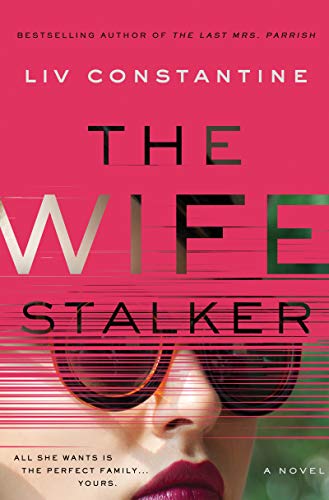 “The Wife Stalker is skillfully constructed and fast paced—a mischievously tense and engaging novel filled with plenty of twists and turns that keep readers spellbound and guessing until the very final page.”

“One dead husband could be an accident, but two?”

Breezing into the tiny seaside paradise of Westport, Connecticut, gorgeous thirtysomething Piper Reynard sets down roots, opening a rehab and wellness space, and joining a local yacht club. When she meets Leo Drakos, a handsome, successful lawyer, the wedding ring on his finger is the only thing she does not like about him. Yet as Piper well knows, it is a rare marriage that is permanent.

Meanwhile, Joanna has been waiting patiently for Leo, the charismatic man she fell in love with all those years ago, to re-emerge from the severe depression that has engulfed him. Though she’s thankful when Leo returns to his charming, energetic self, paying attention again to Evie and Stelli, the children they both love beyond measure, Joanna is shocked to discover that it’s not her loving support that’s sparked his renewed happiness—it’s someone else.

Leo has fallen head over heels for the flaky newcomer Piper Reynard, and unrepentant and resolute, he is more than willing to leave his wife behind, along with everything they’ve built. Of course, he assures her, she can still see the children.

As can be expected, Joanna is devastated—and determined to find something, anything, to use against this home wrecker who has stolen the affections of her husband. As she digs deeper into Piper’s past, Joanna begins to unearth disturbing secrets . . . but when she confides to her therapist that she fears for the lives of her ex-husband and children, her concerns are dismissed as paranoia. Can she find the proof she needs in time to save them all?

“She had promised herself that she would take a year to be alone; that, no matter what, no matter how perfect a man seemed, this time she’d resist. . . . As soon as she met Leo, she’d known it was a promise she wouldn’t keep.”

Liv Constantine is the pen name of USA Today, Wall Street Journal, and international bestselling authors and sisters Lynne Constantine and Valerie Constantine. Their works include The Last Mrs. Parrish (2017) and The Last Time I Saw You (2019). Separated by three states, they spend hours plotting via FaceTime and burning up each other’s emails. They attribute their ability to concoct dark story lines to the hours they spent listening to tales handed down by their Greek grandmother.

The sisters’ newest collaboration, The Wife Stalker is a bold, yet cleverly unsettling psychological thriller filled with complicated characters and a disturbing plotline. The book alternates between two sides of the story. Joanna, the soon-to-be ex-wife, and Piper, Leo’s new love interest. They each give us their interpretation of the circumstances and ramifications of the sordid affair.

“The cottage was pitch black . . . as I pulled down the blackout shades . . . I knew the woods provided enough camouflage so no one would find me here . . . I kept thinking that I should be in the main house . . . not hiding like a criminal in the gatehouse. I was suddenly filled with a hatred so intense that I could barely contain it. . . . Why did it seem that I was always the one left behind?”

Overall, The Wife Stalker is skillfully constructed and fast paced—a mischievously tense and engaging novel filled with plenty of twists and turns that keep readers spellbound and guessing until the very final page.