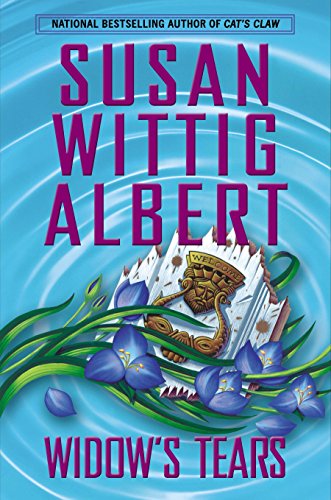 What is the deadliest natural disaster in U.S. history?

It’s the Galveston Hurricane of 1900 that killed an estimated 8,000–12,000 people. A more definitive count is impossible because so many people were swept out to sea. Estimated winds of 145 miles per hour at landfall made it a Category 4 storm that leveled what had been the largest city in Texas.

The Galveston Hurricane of 1900 makes a great jumping off point for this story.

Usually set in the herb shop of China Bayles in Pecan Springs, Texas, this installment follows the escapades of Ruby Wilcox—China’s partner in business and best friend—to Little Round Top, Texas.

Ruby has been summoned by her childhood friend Claire,. This is Claire’s last chance at making something out of her life. She’s out of rehab, and if she can turn the house she inherited into a going concern as a B & B, she might have something to live for.

But first she has to get rid of the resident ghost.

The issues are typical ghost nuisances: pans banging, mysterious puddles of water, random bell ringing. But Claire knows that as kids, when she and Ruby were visiting the house, Ruby saw the ghost.

There must be some connection between Ruby and the ghost, right?

Ruby runs The Crystal Cave, the only New Age shop in Pecan Springs, so she has a passing knowledge of tarot cards and Ouija boards. But she’s always been reluctant to delve any deeper into her psychic abilities for fear of what she may discover. But if her friend needs her . . .

Widow's Tears is told in alternating chapters between the eyewitness accounts from the hurricane (and there is a terrific bibliography) and the current day Ruby/Claire narrative.

The reader knows the ghost is Rachel Blackwood, who lived through the hurricane but lost everything to it. Afterward, she moved to Little Round Top, 100 miles from the ocean, attempting to recreate the happy home she had in Galveston, but it doesn’t work out that way.

Although Susan Wittig Albert works her usual descriptive magic recreating the terror of the hurricane, the action moves so slowly it’s hard to call it action.

The subplots—about fracking, a battered wife, and a bank robbery in Pecan Springs—feel forced. Subplots should be used as a way to build and break tension; here the subjects are impediments. Worthy topics deserving to be explored deeply, these should not be treated as plot throwaways.

In Widow’s Tears the theme of grief and the ability or inability to move through it, is an ongoing one. Perhaps it’s helpful to remember that loss is at its core sorrow, and a sudden shocking loss like that felt after the trauma of a hurricane can cause pain similar to the pain caused by death.

Author Susan Wittig Albert explains that when the flower called Widow’s Tears wilts at the end of the day, it can produce a fluid jelly much like tears. Once again the author suggests that the language of flowers is universal.