Why?: What Makes Us Curious 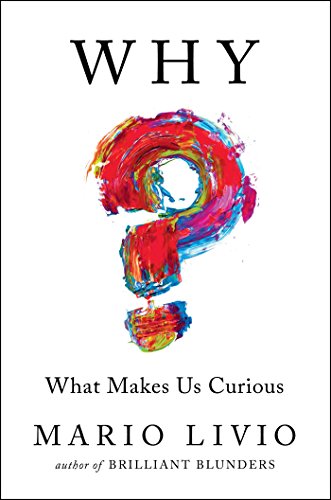 " . . . provides tips and cues readers may use to increase their own level of curiosity."

Virtually everyone has some amount of curiosity, although some quite a bit more than others. Some people might be satisfied to wonder what television program is broadcasting, while others are relentlessly and continuously driven to understand the hows and whys of a wide variety of situations including the great questions of humanity: What is Life? How do I think? What is the universe?

In this book, six individuals are profiled, but the author focuses on two—Leonardo da Vinci and Thomas Feynman—who the author feels show the traits of intense curiosity. Many people would label these individuals as “geniuses” and miss their innate drive for knowledge that complements their intelligence and makes them extraordinary examples of human curiosity.

While some readers will pick up this book to understand the background, history, causes, and multiple faces of curiosity, others may look to find out how much their own curiosity matches up to the six individuals described.

From the early parts of the text, these people may come away disappointed if there is only a minimal match. When one gets to the latter portion of the book however, it becomes clearer why this may be so. Progressively the author elucidates the breadth and complexity of curiosity and the people who manifest it. It becomes much easier to “find” one’s self in these broader descriptions and multiple expressions of curiosity.

As to the cause of curiosity, Livio suggests that at least 40% is genetic. Any of a wide range of experiences comprise the other 60% and may determine how much of the genetic predisposition is intensified or minimized. Some mental traits or environmental experiences can limit curiosity, for example shyness, perfectionism, or not having the social or financial resources to explore curious things.

The maxim “curiosity killed the cat” is well known. The author makes it clear that unbridled curiosity or curiosity not tempered with reasonable safety can be dangerous. Multiple examples of individuals, populations and movements which have gone to great lengths to stifle curiosity are presented: the Taliban, the Nazis, book burning civilizations, and peoples who are dominated by rigid and dogmatic patterns of thinking. While there are pockets of intellectual restriction in this country, America shines through as a beacon for individuals who want to be curious and explore any number of paths.

Even individuals put on a pillar of intelligence, such as St. Augustine and Goethe, as well as whole movements and epochs such as the Inquisition and the Dark Ages promoted the idea that curiosity can be dangerous. St. Augustine proclaimed, “God fashioned hell for the inquisitive.” A Frenchman St. Bernard is quoted to say, “To learn in order to know is scandalous curiosity.”

On the other hand, human curiosity has evolved to facilitate survival, advance our civilization, and play a role in love. Casanova is often quoted: “Love is three quarters curiosity. The woman who, showing little, succeeds in making a man want to see more and has accomplished three quarters of the tasks of making him fall in love with her.”

The author lists a number of traits that both describe a curious person and can be a methodology to increase one’s own curiosity. These can include preserving the ability to be surprised and surprise others, exposing oneself to new sensations, new experiences and new states of mind. If a person allows him/herself to be open to it, the world around us—even our daily routine—give us an infinite number of opportunities to be curious.

Ultimately, this text explores curiosity from a wide variety of angles and shows the author to be astute and “curious about curiosity.” The book is well worth reading simply for the breadth of information about the subject, but also provides tips and cues readers may use to increase their own level of curiosity.