Why We Hate the Oil Companies: Straight Talk from an Energy Insider 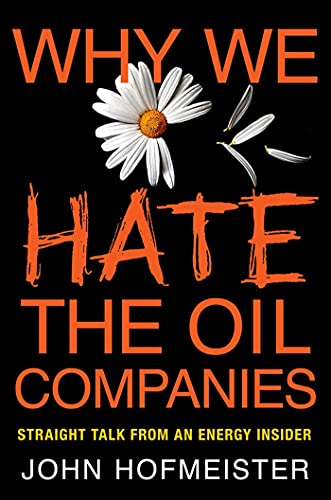 (Palgrave Macmillan, May 25, 2010) BP’s Deepwater Horizon catastrophe in the Gulf of Mexico couldn’t have come at a better, and yet worse, time for John Hofmeister, former CEO of Shell Oil and author of Why We Hate the Oil Companies.  Readers seeing the title will no doubt seek a proper flaying of Big Oil, but Hofmeister went to press before the Gulf disaster.  Instead, he has a bigger warning for Americans: An energy crisis is around the corner—figure 2020 by Hofmeister’s calculations.  Worse, our government and activists won’t make a bit of difference.  In fact, they will continue to pave the road to an economic and environmental Golgotha.  Be they Republicans or Democrats, energy barons or Greenpeace ninjas, Hofmeister declares a plague on all their houses. He makes a convincing case: Total energy use in the U.S. has tripled in the last six decades, but we live off an energy infrastructure created in 1930.  With little done to improve or revamp it, we rely on foreign oil imports and debate piecemeal policy as our nation’s economic survival becomes a game of political gotcha.  In the meantime, myths around the challenge grow as tall as derricks in the oil patch, and Hofmeister punctures many of them.  U.S. energy independence?  A convenient slogan that butts up against the fact that oil, natural gas, and coal are traded globally.  With our enormous national appetite, it is impossible to draw them exclusively from domestic sources to meet demand.  Clean, green energy like wind and solar?  Nice thought, except there is not enough of it available and never will be to reduce our reliance on hydrocarbons.  Hofmeister makes no bones about his oil-patch roots but suggests a wide variety of energy and environmental solutions.  If anything, he may be too accepting of conventional ideas like cap and trade, which other business thinkers, like the Manhattan Institute’s Jim Manzi, view as a poor economic deal for Americans. Instead of taxes or rationing to make energy more expensive, Manzi proposes the U.S. put resources into targeted research to provide insurance against unanticipated consequences.  So, even discounting the Exxon Valdez and the Deepwater Horizon, why do we hate the oil companies? Simple.  Big Oil’s brand names are on 150,000 gas stations and retail outlets throughout the U.S.—more ubiquitous than Walmart, the Baptist Church, or the Post Office.  But retailing is the tail end of the value chain for big oil, providing little profit to the Exxons and Shells.  For them, the money is in exploration and wholesaling, whereas the finished product, gasoline, is a commodity.  The customer experience at the pump, then, is up for grabs, and it’s usually a pretty poor one.  Think of it: your name is everywhere, you don’t care how people perceive your brand, and your industry leaders see no reason to change.  Any first-year marketing student would look at the situation and mutter “idiots.” However, the title Why We Hate the Oil Companies is a bit of a head fake because, beyond its energy ideas, the book is a pragmatist’s lament—another signpost on the highway of government alienation.  Hofmeister’s diagnosis is that the short time frames of our D.C. politicians—two, four, or six years depending on the office—turn them into attention-deficit inmates, incapable of creating policies that require up to a quarter-century of planning and implementation.  The more complex the challenge, the more likely the fissures of our governing system are exposed.  Don’t agree?  Take twenty-six Congressional committees that have jurisdiction over energy and environment and add thirteen executive branch agencies with similar responsibilities.  Sprinkle liberally with gerrymandered electoral districts, endless partisanship and campaigns, and shake well.  Serve with a sprig of mint and afterward explain how to keep gasoline prices less than four dollars a gallon.  To get around this jumble, Hofmeister believes we need a body similar to the Federal Reserve—which sits (for the most part) above short-term politics—to create and monitor eco-energy policy. But we shouldn’t necessarily swallow Hofmeister’s advocacy hook, line, and sinker.  His game plan resembles that of another energy eminence, T. Boone Pickens, who several years back spent a small fortune to go grassroots and buy advertising that supported natural gas and wind power.  What Pickens didn’t disclose were his considerable investments in each and a desire to pass legislation favoring such energy sources. Does Hofmeister have a similar agenda?  It’s hard to tell at this point.  His group, Citizens for Affordable Energy (which gets plenty of ink in Why We Hate the Oil Companies), receives most of its funding from Hofmeister, according to the most recent IRS tax disclosures.  Additionally, as much as Hofmeister might deride the political game, he does not demur from its scrums.  According to the Center for Responsive Politics, his organization spent $150,000 in 2009 to lobby members of Congress.  Judging by his organization’s Facebook page, however, it is evident that the grass still hasn’t quite taken root for his cause; the Center is pretty much a one-man effort, founded, funded, and operated by him.  This is unfortunate, and not necessarily because of any particular position Hofmeister represents.  Indeed, we are a nation of joiners but not always well-informed ones.  We nod our heads to the sound-byte and talking head; we join the simpleton’s line when politicians hit our hot buttons; and it doesn’t take a village, but instead an ecological disaster, to get us to act with smart purpose. Reviewer Robert Nersesian has spent his career in public relations, working for or advising Fortune 500 companies.  He is currently president of the consulting firm Public Advocacy Associates, LLC.