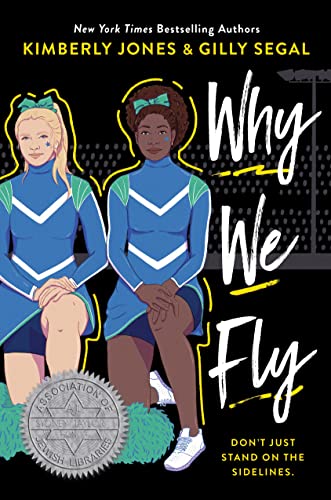 In the follow-up to their 2019 book I’m Not Dying with You Tonight, Kimberly Jones and Gilly Segal bring us two teenage best friends, both on the competitive cheer squad. Chanel, determined to be captain, pushes herself so hard she handles her stress in questionable ways. Eleanor, dealing with the aftereffects of a concussion, meets and falls in love with Three, the Division I bound quarterback of the high school football team. They have been friends since childhood, and these differences begin to push Chanel and Eleanor apart. Chanel is especially worried that Eleanor having a boyfriend will derail the plans the two friends have made for the future:

“Why are we doing this again? It’s no different from when Roman started paying attention to her last year. When Three ghosts her, like Roman did, I’m going to have to reroute her back to our goals. This is not part of the plan.”

But soon bigger problems emerge, when the cheer squad decides to take a knee during the national anthem to show support for an alumnus suffering consequences in the NFL for his peaceful protest. Other groups at the high school join the next week, but the school board and principal come down on them hard—on Chanel in particular. The difference? Chanel is African American. Eleanor and many others who participated in the protest are white. Suddenly the repercussions of what it means to protest become real in ways the girls never imagined.

Eleanor, not understanding why her protest is seen differently from Chanel’s, and why Chanel is angry with her, goes to her rabbi for help. He tells her she needs to see the difference between an ally and an accomplice. “It’s hard to define, but I like to think of it this way. An ally supports a cause without suffering any consequences for their actions. But an accomplice takes the hits along with the people they’re trying to support.” Eleanor wants to understand but realizes it’s more complicated than she ever imagined. Why is her boyfriend so torn about taking a knee? Doesn’t he feel, as an African American, that he should be protesting? And why is he angry at her for wanting to participate?

Chanel, on the other hand, sees her dreams slipping away. With a stain on her school record for tweeting her support of the protest, how can she possibly gain the scholarships and college acceptances she’s worked so hard to achieve? And why doesn’t Eleanor even try to understand her?

Alternating chapters between Chanel and Eleanor, Why We Fly explores the timely issues faced by many people. The narrative flows well, and the tension builds throughout the story as decisions are made. This book will be enjoyed by any reader who appreciates a well-told story, discussion about problems faced by today’s teenagers, and race issues relevant not only to the United States, but the world. Highly recommended.