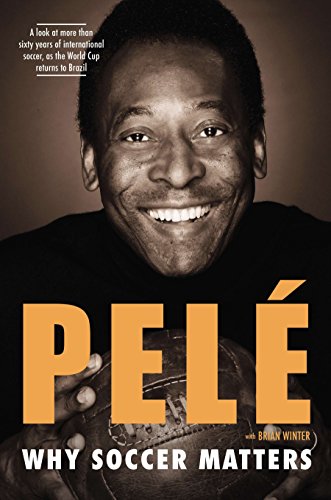 “The fun of this book is that you really experience all the various ages and stages of Pelé’s life in one economically written volume.”

The book is called Why Soccer Matters, but it really ought to be called Why Pelé Matters.

Because the diminutive Brazilian soccer player has probably done more to popularize the game than any human being since men first learned to kick balls toward goals. The Pelé that emerges from these pages, however, comes across as far too humble ever to put his name into the title of a book or tell you how important he is. That’s just not his style.

Pelé was born in a small, poor Brazilian town in 1940. His given name, Edson, was his parents’ misspelled homage to the inventor of the light bulb, a device that had only come to their part of Brazil just before Pelé’s birth. In Brazil, pretty much everyone is known by a nickname. Pelé went through several before friends and family settled on the one the world came to know. He didn’t like it at first, since it was a corruption of the name of an already famous player, but eventually he came to embrace the name.

Edson, the human being, was shy and uncomfortable with the limelight. Pelé became a second identity, one he could embrace and hide behind when he was out in the public eye, where he has been pretty much since his late teenage years.

Pelé’s father was a Brazilian soccer star-in-the-making whose knee was shattered in the first professional game he ever played. Pelé’s father, known by the nickname Dodinaho, taught Pelé every conceivable soccer skill, including the all-important one of being able to hit a ball with your forehead while keeping your eyes open.

This particular skill helped Pelé score vital goals in the 1960 World Cup in Sweden, the first Brazil ever won, which more than made up for the bitter defeat Brazil suffered twenty years earlier, to Uruguay at home, when Pelé was just a boy. He says it was the only time he ever saw his father cry.

Pelé, by his own admission, teared up a lot throughout his career. An emotional sort, he actually passed out after scoring the final goal in Brazil’s first match in 1960. The fun of this book is that you really experience all the various ages and stages of Pelé’s life in one economically written volume. You have the childish Pelé, better than all of his peers, whose father criticizes him severely for trash talking his friends, just because he was the recipient of God-given talent.

You have the young, impressionable, starstruck Pelé who travels to Sweden while still not quite out of his teens and actually meets a Swedish girl who is intrigued by the blackness of his skin even more than his skill as a soccer player.

We then see the politically minded Pelé, who withdraws from the national team when Brazil turned soccer into, well, a political football. You have the naïve Pelé, whose business affairs were in such bad shape that he had to come out of retirement to play for the New York Cosmos, a mid-1970s creation that would have been a fifth-rate team in Brazil. The good news for Pelé is that the role allowed him to proselytize about soccer to the United States, and he accepts a measure of credit for the popularity of the sport in the United States today.

And then finally you have the mellow Pelé, now in his early seventies, looking back on a lifetime of change—in his own life and surroundings, in the game itself, and in living standards, both in Brazil and around the world. The impoverished nation he knew still suffers from drugs, hunger, and violence, but at least his homeland is now heading in the right direction.

He has long since resolved his business crises, and today he retains the love for the “beautiful game” as he described it in the 1970s, as Brazil is on the verge of hosting the World Cup for the first time in decades.

This book offers a wonderful way to get to know one of the most joyous, optimistic, and influential athletes of the last half century. You’ll have a ball discovering why Pelé matters as you read Why Soccer Matters.