Why Not?: Lessons on Comedy, Courage, and Chutzpah 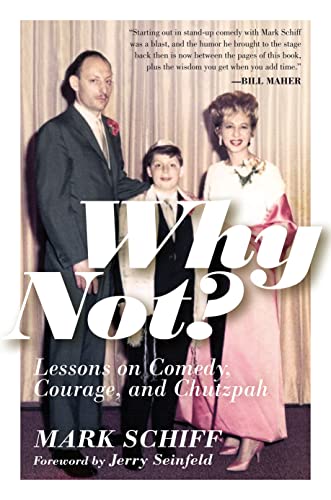 Mark Schiff makes his living at night as a comic. “When the sun quits, my heart starts ticking. . . . The night is what we live for.”  He was once asked to contribute an article to Los Angeles’ Jewish Journal, and he said, “Why not?” Schiff enjoyed writing the article, and writing somehow morphed into this book, and its title.

With the Foreword by his longtime pal, Jerry Seinfeld, (“We still work together doing dozens of performance dates all over the country every year . . . and this book is a great way for you to get to know him too.”), one wonders, initially, why Mark Schiff, a king of deadpan and Jewish humor, is not a household name as well. But as one struggles to plow through the book, it becomes clear.

An only child who dealt with depression, “With no known options, hardly any schooling, no discernible talent,” Schiff chose to become a comedian. It proved the right choice.

However, as reading progresses, this reviewer, expecting an interesting memoir, discovers Mark Schiff’s mission was a 200+-page tome of unwelcome Jewish sight gags based on Jewish holidays, Jewish foods, dieting, and other stereotypically “Jewish” topics, all disappointing. Readers of other religious beliefs might begin to snore after a while.

About one-third into the book, Schiff finally opens up in somewhat-memoir-like form. He speaks about getting into stand-up, and experiences with celebrities such as Jackie Mason and his six times on the Tonight Show with Johnny Carson. Schiff begins to look human and not so full of himself as he did with the schtick from the first third of the book. It then turns into, at least, a pseudo-memoir.

It is understandable that Schiff has spent years in therapy. His parents were both depressed and exhibited extreme violence at each other in front of young Mark, an only child. If channeled properly, many talented comedians come from a nutso upbringing and do well in their field.

Be prepared for corny, stereotypical jokes such as “All Jews need to live near an MRI.” However, there were a few touching moments such as his mother’s death in 1999, and the birth of his first grandson in 2020. “I started to feel real love. He had entered my heart.” Not touching, however, is when Schiff tries to joke about his grandson’s “tooting.”

Female readers might find a particular comment distasteful concerning his wife who was diagnosed with the BRCA2 gene. “Her (breast) exam was not much different than the ones I give, except mine include dinner and a movie.”

Toward the end of the book, Schiff does a bit of name-dropping of celebs he’s met over this lifetime, including Bob Dylan, Sir Anthony Hopkins, Katharine Hepburn, and Carl Reiner, and how his friend, Jerry Seinfeld, gifted him a 1982 Mercedes.

If massive doses of self-deprecating humor throughout, replete with archaic Jewish comic jokes à la Henny Youngman (“My doctor recently gave me a prescription for one Cialis pill so I’m ready when my next birthday comes around”), interspersed with old-age advice, Jewish guilt, and life insights are what prospective readers are seeking, then this memoir is for you. Otherwise, the author might have best been served with at least a bit of seriousness to pull at the reader’s heartstrings and not leave them dreading to turn the page for fear of yet more Ed Sullivan Show-style, aging gags.