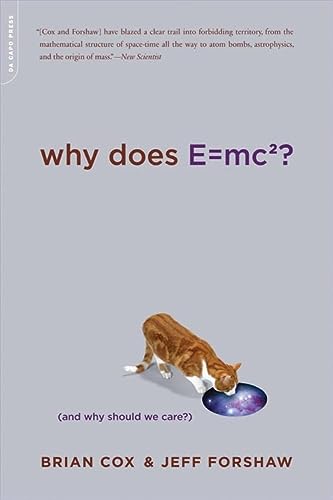 Why Does E=mc2? is one of those questions that educated
non-physicists must have been asking themselves for over a hundred
years, ever since Albert Einstein derived the equation back in 1905.
Now, in this easy-to-read little book from Brian Cox and Jeff Forshaw,
we have the answer. The authors are both professors of physics at
Manchester University, and Brian Cox is also a well-known TV
personality—well known enough to warrant a jacket blurb from Stephen
Fry.

The book begins with the traditional approach to explaining the slowing
of clocks for observers in motion relative to one another, by examining
the geometry of a light beam bouncing up and down in a moving vehicle.
The authors demonstrate just how easy it is to get to Einstein’s time
dilation formula using nothing more than Pythagoras’ Theorem and the
knowledge that the speed of light is capped. But they don’t leave it
there. In the first half of the book they consider two more approaches
that lead us to the same conclusion.

Along the way, they very cleverly introduce all the ideas we will need
to get to the world’s most famous equation, E=mc2. What is more, they
focus on the most puzzling part: the question of what c, the speed of
light, is doing in there. Very early on, they introduce c as a scaling
factor so that we can talk about “distances” in spacetime. Later, by
various means, they explain why c has to be the maximum speed that
anything can travel. It is a small triumph of the book that Cox and
Forshaw make the attempt to show the logical necessity of there being a
universal speed limit, and that their arguments are so presented so
clearly.

Yet, as with any book of this size tackling a subject so enormous, it is
not long before the authors start asking us to take things on trust,
undermining the comprehensibility of their presentation. The first big
one is when they introduce Maxwell’s equations and ask us to believe
they demand that the rate of propagation of an electromagnetic field be
constant for all observers. Then comes the work of mathematician Emmy
Noether and her demonstration that invariance leads to the conservation
of quantities.

These, and many others introduced later, are tough ideas and hard to
swallow. The authors introduce them to provide alternative ways into the
understanding of relativity and that famous equation. It is to their
credit that they do not always hide the complexity nor the long history
of ideas behind relativity, but it would have been better, perhaps, to
have spent a few more pages on some of these notions.

It is also to their credit that they make the case, as Feynman and
others have done before them, that, at some level, the weirdness of the
universe just has to be accepted, and the only test of physical theories
that matters a damn is whether they are supported by actual observation
and experiment.

And there would have been many pages to spare for additional background
and explanation if, near the end, the book had not wandered into obscure
and largely unrelated areas as it tackled a broad-brush description of
the Standard Model in an attempt to explain what mass is. It was
inevitable that some particle physics had to be discussed and that this
would lead to discussions of quantum theory.

After all, the book’s sub-title is And Why Should We Care? and
the reasons given largely involve nuclear power, chemistry, and
cosmology—all of which are helped by discussions at a subatomic level.
Perhaps also Brian Cox’s involvement at CERN (he heads a project there
to upgrade the ATLAS and CMS detectors for the Large Hadron Collider)
meant that a discussion of the Higgs particle was inevitable.
Nevertheless, this, and the very brief glimpse of general relativity
right at the end, seemed to detract from the clarity and force of the
earlier exposition.

It is a curious book that tackles several of the most difficult ideas in
modern science in the tone of a friendly, almost patronizing,
high-school teacher, trying to ensure that the slow kids manage to keep
up with the rest of the class. The tone and the endless asides (did you
know that the Sun converts 600 million tonnes of hydrogen into helium
every second?) can become a bit wearing, but Cox and Forshaw have to be
praised for their unwavering insistence that their subject is accessible
to anyone at all who will stay with them and think about it.

In an age when most lay people throw up their hands at the mention of
relativity or quantum theory, when religious creation stories and New
Age mysticism offer a far simpler, less challenging route for the
intellectually overwhelmed, it is hugely important that ordinary people
see that physics is not just for the egg-heads, that it can be
understood, and that there is a grand beauty in what it reveals about
our world. Cox and Forshaw have made an important contribution in this
area, one that will help school science teachers as much as it will
their students.