Why Didn't We Riot?: A Black Man in Trumpland 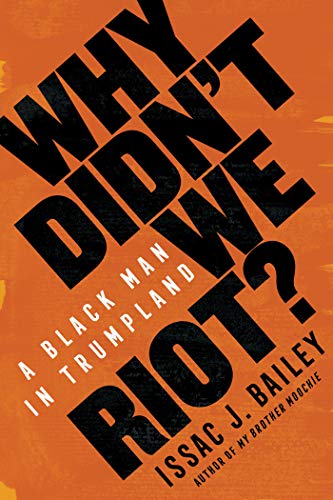 “A recognition slowly arises that we are all in this together and the time for an awakening to that fact is now.”

“I’M NOT PROOF THAT AMERICA IS GREAT. I’m not proof of American exceptionalism and meritocracy. I’m proof of the resilience of black people in a country which long deemed dark skin a sin.”

The words spoken above by award winning journalist, author and college professor Issac J. Bailey are disturbing to read. But internally absorbing the feelings behind them is excruciating. The obvious implication here is that no matter what a Black American accomplishes or how well-meaning are one’s intentions, the soul of a man is often still unseen.

The vociferous stream of blatant untruths from Donald Trump and his administration, the blustering cacophony of deafening voices on cable news, and daily protests for racial justice and economic parity, have worsened the lives of African Americans and as a result, the battle lines in the U.S. have become sharper and more volatile by the day.

Nonetheless, singular voices have arisen that are able to separate the wheat from the chaff to openly speak the truth about the continuous violence perpetrated upon Black people and the rising inequality in Trump’s America. Issac J. Bailey is one such voice. Despite his many accomplishments in a white dominated world, he feels a deep anguish about the mounting abuses African Americans are forced to endure.

According to Bailey, “There are plenty of black people in Trumpland like me. We swallow our anger. We deny our fears. We hope against hope that our continuing efforts to reach out will be reciprocated. We do this even when we are the ones being killed or maimed or threatened by men and women in uniform we pay to protect us. The black man being stopped by police late at night on the side of the road has as much, or more, to fear than the cop who initiated the stop.”

What infuriates many in Black communities is that “young black men are frequently told their concerns are overblown, that cops need to be praised, not scrutinized, that families like theirs are solely to blame for the chaos with which they daily have to contend.” And Bailey questions, “Why should they believe police officers and others who claim their brother, their friend, effectively caused his own death, even if those officials are telling the truth?”

Bailey expresses the often muzzled voices of the many Black Americans who feel deep pain and outrage over the mounting abuses they are still forced to endure. For some, there exists a scintilla of hope that at some point, their voices will not be merely acknowledged, but respected with action as well. There is no doubt that a racial reckoning is upon us.

For some readers, the end of Why Didn’t We Riot? A Black Man in Trumpland may feel abrupt. Having internalized the thoughts and feelings from the author and the many voices he represents, it may have been helpful to delineate some suggestions or solutions that could serve as a roadmap of sorts to alter the trajectory of the American psyche that has been so damaged by racist thoughts and deeds.

In 169 pages, Bailey splendidly creates a milieu where empathy can take root and blossom within readers of all backgrounds. A recognition slowly arises that we are all in this together and the time for an awakening to that fact is now.