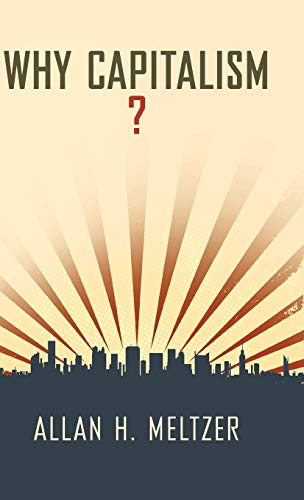 “Why Capitalism? summarizes Professor Meltzer’s past scholarship for a general audience and reiterates his policy proposals in the context of the present economic crisis. It will be convincing to those who agree with his brand of monetarism, to those who do not know the history of the Phillip’s Curve, and to those who unquestioningly accept the observations of accomplished economists. For the rest of us, it is a fascinating exposition of Dr. Meltzer’s worldview.”

One would think that by now the failed and discredited economic ideas of the Reagan administration would be consigned to the dustbin of history, but they seem to be alive and well in Allan Meltzer’s new work Why Capitalism?

Professor Meltzer is a monetarist who advised both President Reagan and the British government under Margaret Thatcher to cut taxes as a way to stimulate growth. He believes that it is appropriate to cut government spending during recessions and advocates strict monetary constraint—even when it puts people out of work. Short-term fiscal stimulus is ineffective, he says, because people use it to pay down debt rather than to increase consumption. (On my planet during a very severe recession, people who are out of work use properly conceived stimulus benefits to put food on the table).

Books in the social sciences are supposed to ask a question, present a thesis, and then argue the thesis with evidence. Most authors do not meet this standard, and academic publishers such as Oxford University Press are the last bastion of peer review that requires rigorously organized arguments. But apparently the standards are eased a bit for senior scholars.

Why Capitalism? is a series of loosely connected essays, only tangentially related to the question that is supposed to drive the book. The essays cover capitalism and socialism, regulation, government deficits, international institutions, foreign aid, and the looming threat of inflation. What holds them together is the coherence of Professor Meltzer’s intellectual worldview rather than an explicit argument. The essays build toward a concluding chapter of policy proposals that a more cynical reviewer might guess is an elaborate cover letter for a position in a Santorum administration.

It is an interesting work, because unless the reader is a member of the choir being preached to, she will wonder how this school of scholars can possibly justify calling for reinstitution of the economic policies that dismantled the regulatory apparatus and the redistributive mechanisms responsible for our nation’s unprecedented growth in the postwar era.

“Democratic capitalism has three unequaled strengths.” It achieves economic growth and individual freedom at the same time. It is a system that adapts to diverse cultures as they already are. And the problems of capitalism, most notably the maldistribution of income, can be removed by democratic governance.

Alternatives to capitalism are utopian visions, and they almost always bring “brutal enforcement.” Nations that regulate markets so there is more equitable distribution of opportunity, income, and wealth have “democratic capitalism.” Socialism is never defined, but it seems to include any nation that justifies oppression with communist rhetoric; and reference is made to the failures of democratic socialism in Great Britain.

China, where entrepreneurs are encouraged by the Communist Politburo, is apparently a successful example of capitalism. In other words, any economy that has failed or suffered oppression is, by definition, socialist. And economies that encourage growth, even when the governments call themselves Communist, are capitalist. (One should never criticize tautologies—they are one of the few things in the world that are always right).

Capitalism is a system in which there is not supposed to be a brutal suppression of individual liberties—no matter the culture.

But what happens in cultures in which people are supposed to have an equal opportunity to eat basic sustenance, or equal access to life-saving healthcare, or equal chances at the pursuit of happiness no matter what their wealth or their income?

Are the infants who die at rates higher in the United States than in any other industrialized economy making choices? Their deaths, highly correlated with the poverty of their parents, would seem possibly the most brutal kind of enforcement.

Regulation is a public good that Professor Meltzer agrees is vital to healthy capitalism, although he seems to disagree with almost all existing government regulation. The chapter on regulation is an interesting exposition on the subject by a scholar who both feels it is necessary and dislikes it in most of its forms. When economic policies make sense, the author attributes them to democratic governments reflecting voter’s concerns. When they fail to make sense, the problem is that our democratic form of government—necessary for the regulation of capitalist economies—is not working properly.

We are in a political stalemate. Regulations often invite corruption, arbitrary decisions, and circumvention. But heaven forefend a political system in which the government successfully implements policies of social fairness, because that would lead to economic and political failure.

In the current political environment, according to Dr. Meltzer, one party offers higher spending, and the other offers lower taxes and higher spending. The reader who has a rudimentary grasp of current events will be able to form his or her own view of which party has balanced the budget in the past two decades, called for the repeal of tax breaks to the wealthy, and opposed unfunded entitlements.

Chapters on international institutions and on foreign aid do not explain the topics well to the uninitiated and have little new to say to a scholarly audience. International institutions are ineffective, he writes, and the global imbalances they are called upon to remediate will become more severe as the United States continues to fund foreign wars with a balance of payments deficit. This would seem a convincing (if slightly obvious) argument. What it has to do with the advantages of capitalism is less obvious.

Foreign aid has failed because of corrupt officials in the recipient nations. Not surprisingly, the projects that nation-states sponsor in other nation-states are politically motivated. Many recipient nations have weak and ineffective governments and little rule of law. (Apparently capitalism has not helped either growth or sensible politics in some places).

A final chapter on inflation ties together Professor Meltzer’s views on monetarism, regulation, and the Federal Reserve—all topics on which his global reputation comes from scholarly contributions to knowledge.

He proposes that the United States and Europe base their currencies on a credible commitment to low inflation. Regulatory authorities should abandon the concept of “too big to fail,” and allow institutions that take on inappropriate risk to suffer the consequences.

We are not treated to the implicit debate against the school that moderate inflation is preferable to unemployment. In an economy where benefits are indexed to a consumer price index, interest rates reflect expectations of inflation, and repayment of debt to foreigners is made easier with moderate inflation, many scholars would disagree with Professor Meltzer’s call for managing the economy without regard for whether the individuals who make up the economy are gainfully employed.

Why Capitalism? summarizes Professor Meltzer’s past scholarship for a general audience and reiterates his policy proposals in the context of the present economic crisis. It will be convincing to those who agree with his brand of monetarism, to those who do not know the history of the Phillip’s Curve, and to those who unquestioningly accept the observations of accomplished economists. For the rest of us, it is a fascinating exposition of Dr. Meltzer’s worldview.