Why Are Faggots So Afraid of Faggots?: Flaming Challenges to Masculinity, Objectification, and the Desire to Conform 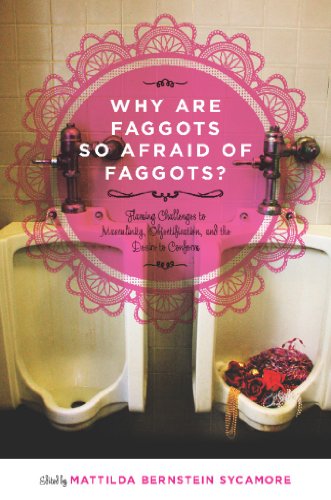 “Why Are Faggots So Afraid of Faggots? is a vital book, highly readable and highly rewarding. All those who have gay members in their family, in their workspaces, or in their communities (and surely, by now, we realize that that means all of us) would do well to read it.”

From its provocative title onward, Why Are Faggots So Afraid of Faggots? is the sort of book that confronts its reader and makes demands of him. It asks him, for at least a moment, to open his eyes and see the world from the point of view of the authors of any of the 29 essays collected here, and in doing so risk being offended, angered, saddened, entertained, pushed, throttled, frightened, confused—or all of these things at once.

Why Are Faggots So Afraid of Faggots? comes at the reader like a sudden slap, a sucker punch; it holds nothing back. It is a collection in which the individual life experiences of the authors become, in the reading of them, universal, in that they have the power to move, to communicate, and to educate anyone experiencing them.

What the reader will not experience in reading this volume of well written, passionate, even hectoring essays is boredom. For each of these essays represents terra incognita, an unknown realm ripe for discovery.

Granted, there’s that title. One that might well be cringe-worthy at first, as it sounds as if it is the first of a series of pejorative-laced titles for a particularly politically incorrect list of “For Dummies” books. (Just empty out the title to “Why Are _________s So Afraid of _________s” and then attempt to construct an offending title of your own.)

But consider for a moment the titles of some of editor Mattilda Berstein Sycamore’s other essay collections: That’s Revolting: Queer Strategies for Resisting Assimilation, Nobody Passes: Rejecting the Rules of Gender and Conformity, and Dangerous Families: Queer Writing on Surviving. None of these collections would be considered an easy read, as all challenge our notions not only of what it means to be straight or gay, but also, and more importantly, what it means to survive as a gay man or woman in modern society. It highlights as well the pronounced differences between the idea of what exactly “being gay” constitutes among the members of the gay community.

In the asking of the title and the subsequent answering in the reading, Why Are Faggots So Afraid of Faggots? turns out to be a very good, very important, and startlingly modern question—one for an age in which gay men and women have at long last won a modicum of human rights and grudging respect at the cost of an ever more assimilated lifestyle.

The editor begins the exploration of this concept in her excellent introduction:

“We’ve grown to appreciate the way our eyes give everything away, our hips sway, our voices flow up and down and then up again: hold me. We’ve embraced our hunger for bushes and beaches, back alleys and bathrooms and anywhere else we can find those bodies we once shunned: our own. We’ve come to terms with our deviance, our defiance, our love for fucking and flowers. We’ve pushed inward and outward at once; we’ve learned to hold one another even if it’s only that moment, that taste, that tongue to tongue or the imprint of sweaty fingerprints.

“And still, we are losing hope. We wonder how our desires have led to an endless quest for Absolut vodka, Diesel jeans, rainbow Hummers, pec implants, Pottery Barn, and the perfect abs and asshole. As backrooms get shut down to make way for wedding vows, and gay sexual culture morphs into ‘straight-acting dudes hangin’ out,’ we wonder if we can still envision possibilities for a flaming faggotry that challenges the assimilationist norms of a corporate-cozy lifestyle.”

More specifically to his point, the editor continues in her explanation of why she considers this book to be “an emergency intervention:”

“Masculine ideas have long reigned supreme in male sexual spaces, from the locker room to the tea room, the bars to the boardrooms. Yes now a sanitized, straight-friendly version of gay identity exists side by side with the brutal, calculated hyper-objectification of internet cruising: scorn becomes ‘just a preference,’ lack of respect is assumed, and lying is a given. . . . Is this what has become of the intimacies we crave?” In “My Fear, The Forces Beneath,” essayist Willow Aerin Fagan explores his closest relationship, the one with his father:

“A faggot, in my father’s eyes, meant more than a man who wanted to have sex with other men. It meant a man who showed vulnerability, softness, a man who cried, a man who moved with grace, a man who did not live in the stable, traditional structure of masculinity, but was fluid, unpredictable, dangerous. A man open to the hungers and thirsts of his heart, and to the possibility of love, connection, those wild intimacies which expose one to so much potential joy, so much potential hurt.

“Many of my father’s ideas about masculinity remain current, despite some shifts in the social landscape. The core ideal of masculinity is still the rigid, invulnerable man, always in control. This image as been taken up by gay culture, polished, worshiped in the form of glossy magazine images and hard, gleaming bodies. There is a perverse circle: the masculinity we lust after, which we seek as rescuer and lover, is the very same masculinity which appears in those who attempt to destroy us, in body and mind, soul and heart.”

Jump then to this critical bit from “Appearances and All That” by Tommi Avicolli Mecca:

“It was sometimes difficult to work with gay activist types. They really had a different agenda. Respectability. Fitting in. They were always saying that ‘gays are like everybody else.’ I didn’t want to be like everyone else. Normalcy was overrated. And boring. As Oscar Wilde or Jean Genet might have said.

“Some activists thought queens like myself were giving them a bad name, that we hurt their cause. By being out there on the corner of a street known for hustlers, whores and queens or making a lot of noise in Rittenhouse Square (instead of silently parading around looking for dick), I was setting back the cause of gay rights.” Thus the raw nerve is exposed: the same masculinity that is the source of attraction (and the obvious birthright of all men, gay or straight) remains the chief source of danger for those whose sexual identity is fluid enough to set them beyond the boundaries of the “norm.”

Just as important, even within the community in which men sleep with men, those who lack the traits acknowledged as “masculine, those hard bodies and lantern jaws, are still seen as outlaws, as undesirable. And, thus, the mixed message results: the “come closer/go away” that is the theme of so many relationships between men, gay with gay and gay with straight, to say nothing of straight men in their relationships with each other.

This is perhaps best clarified by the book’s most powerful essay, “It Gets Better?” by Matthew D. Blanchard. In a work that begins with a jolt (“In early October 2007, I was discovered alone and on the brink of death, after what doctors now believe must have been ten to twelve days of comatose confinement . . .”), Blanchard uses the details of his own life to question the veracity of our present-day notion that, if you can, as a gay youth, survive high school, you can live a fully open, happy and successful life. In Blanchard’s view from the place he calls “Fog City,” gay men are as often the enemy as straight men are and no one is to be trusted, except perhaps a pet dog.

Yet faced with the idea of suicide, the logical out for those for whom “it” has not gotten better, Blanchard writes:

“Perhaps, in full appreciation of remaining alive despite disease and disfigurement after so many near-miss forays toward death, I am convinced of my extraordinary good fortune and blessings. Or, maybe, all that’s keeping me alive today is gut-wrenching gay boy guilt.” The various essays of this book—many of which attain the level of theatrical monologues, if not arias—reveal the full range of emotional colors of the rainbow flag, guilt, sorrow, and a sense of abandonment chief among them. And yet as noted by Blanchard, there is a sense of good fortune always, of blessings abounding.

As the title suggests, the language here is rough and to the point. The realities revealed in the stories are rougher still. And yet the value of a book like this one is in the picture of humanity it reveals—for good or ill.

Why Are Faggots So Afraid of Faggots? is a vital book, highly readable and highly rewarding. All those who have gay members in their family, in their workspaces, or in their communities (and surely, by now, we realize that that means all of us) would do well to read it.