Whose Poop Is That? 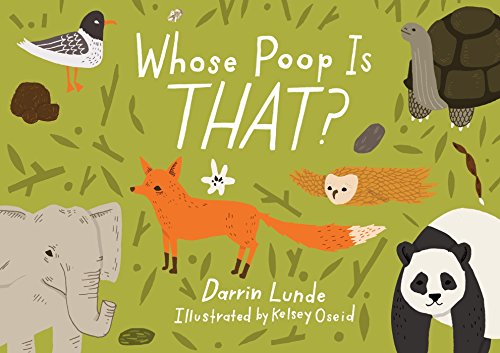 Whose Poop Is That? This question is asked of readers many times. Can you guess correctly? From the basis of a clump of poop and a paw print, can you guess what animal left its scat? Could it be an owl, a fox, or maybe a Galápagos tortoise? It will not take kids long to catch on, but knowing which animal left the poop may be a bit harder.

The pen and ink illustrations will help. Digitally colored in tones of green, brown, gray, and white these illustrations contain details not to be overlooked. Keep an observant eye for feathers, fur, bones, and splinters. These will help you decide Whose Poop Is That?

Each animal takes up two spreads. The first shows footprints on the left page and asks, “Whose poop is that?” The right page shows the animal’s scat. To find the answer, simply turn the page. On this spread kids will find the animal in its habitat. Turn the page once more, and a new set begins. Seven animals are included, plus one bonus. If you know which animal’s poop is square, you’ll know which animal is the bonus.

There is more to Whose Poop Is That? than identifying animals by their scat. Lunde weaves in interesting facts in both the pages and the back matter that includes “Animal Poop Facts” and “The Scoop on Poop.” Yes, kids might say a few “gross” or “yucks” along the way, but mostly they will be amazed and interested in what can be told about an animal just from the scat they leave behind. In addition to identifying the animal and what it has eaten, scientists can tell if the animal is healthy.

Kids generally like things that are weird and gross. If they do, Whose Poop Is That? will not only entertain them, it will educate them in a most unusual science. Just remember, no touching any poop you come across. Not only can it reveal interesting information about the animal, scat can spread diseases. While the author mentions this, it is not stressed. Curious kids will need parental reminders not to touch (or to wear gloves) should they come across any scat and are curious to know Whose Poop Is That?