Whose Child Am I?: Unaccompanied, Undocumented Children in U.S. Immigration Custody 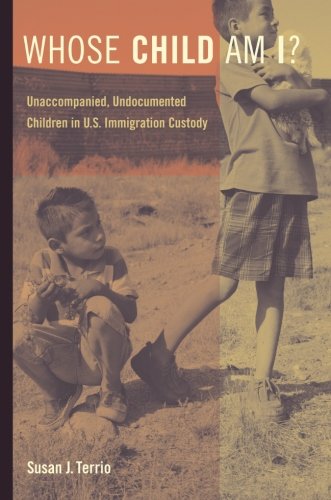 “underscores the imperative of immigration reform for both practical and humanitarian reasons.”

Maribel fled Honduras for the United States as a teenager after her alcoholic father tried to kill her with his machete. Another young Honduran, Ernesto, headed north to escape grinding poverty and vicious beatings from his stepfather.

Corina, the youngest in a large Guatemalan family, watched her sisters suffer every kind of domestic abuse imaginable and knew that she had to run away. Abraham, a transgender youth from a Mexican region where a visible maricon (faggot) risks extreme persecution, even from his own family, got out before it was too late.

These children, and many thousands more, see no option but to abandon their Mexican and Central American homelands and undertake the perilous journey to the U.S. as unaccompanied minors.

This vulnerable population that had been ignored in immigration debates suddenly became breaking news in 2014, when shocking pictures of kids in jail-like detention centers began circulating in the media. The number of children apprehended at the Southwestern border since October 2013 exceeded 57,000 by July 2014 and continues to climb rapidly.

These children are not seeking a soft life on easy street courtesy of American taxpayers, as anti-immigration interests maintain. Rather, these young migrants hope for freedom from domestic abuse, societal prejudice, gang violence, and the brutality of extreme poverty, with a chance to build better futures through study and hard work. They simply want to live and to be able to realize their potential.

Certainly, they have to fight for this opportunity. En route, they are easy prey to coyotes (guides), traffickers, drug cartels, and other exploiters. They have to cling to cargo trains, hike jungles and blazing deserts, and cross the treacherous Rio Grande only to face the near certainty of coercive arrest by border patrol often followed by extended detention when they reach “the other side.”

In Whose Child Am I?: Unaccompanied, Undocumented Children in U.S. Immigration Custody anthropologist Dr. Susan J. Terrio tells the story of these desperate youths from their motivations for migrating, through the traumatic passage north, to their arrest by immigration authorities and subsequent submersion in the labyrinthine federal detention system, their battle for legal status, and ultimate deportation or release to build new lives in the United States.

Dr. Terrio exposes the shadowy juvenile custodial system, which has escaped public scrutiny for years by virtue of the overlapping and competing layers of bureaucracy involved. In so doing, she traces how the U.S. government got into the business of detaining children, in large part because of the lack of separate provision for minors under draconian immigration laws.

This richly detailed ethnography is based on more than three years of intensive participant observation including attendance at immigration court proceedings and site visits to 19 of the 39 detention facilities for unaccompanied minors. In-depth interviews were conducted with attorneys, judges, directors, case managers, facility staff, clinicians, and formerly detained youths.

The product is a powerful and timely exposure of the institutional violence suffered by migrant minors in federal custody who are being detained under two competing agendas—mandatory detention in custodial facilities and removal proceedings in immigration courts. Not only does the tension between these agendas lengthen the confinement of apprehended youth, but also compassionate consideration of the best interests of the child tends to be subsumed by the current emphasis on border security and enforcement.

Although current federal regulations mandate the least restrictive setting and limited stays in detention for minors, Dr. Terrio’s informants still paint a very bleak picture of their lives in custody overwhelmed by feelings of anxiety and powerlessness.

Maribel remembers: “So they took us to a shelter in Texas. . . . At first I thought it wasn’t like a jail, but then I saw that we couldn’t leave . . . [E]verybody there had depression, and the girls were always crying . . . Life stopped in there, life was ended. There was no life because all we could see was the fence and the electric cables . . . I said ‘I am not like a criminal.’ “

And the care and accommodations in these long-term detention facilities are personalized and palatial in comparison to the treatment most children experienced at Customs and Border Protection (CBP) stations after apprehension:

“Nearly every young migrant described the windowless rooms, metal cots, lack of bedding and harsh lights in CBP stations. They remembered the freezing temperatures, the bad food—especially the ubiquitous frozen sandwiches—and the gnawing hunger because most were given just one meal a day. Two Salvadorians, Isabela and her younger sister, were made to feel like ‘trash.’ They were filthy and hungry and not allowed to lie down for the duration of their thirty-six hour stay.”

It is no wonder that some formerly “good kids” snap and end up branded as trouble-makers, prime candidates for deportation. Other children opt for voluntary deportation to avoid extended stays in closed shelters that range from group homes to juvenile jails, depending on the level of risk they pose. These children remain in custody until they can be released to family or foster homes, or age out of the system.

Throughout this tortuous process, little accommodation is made for the special needs of minors, suspended in a limbo where they understand little of the language and legal process of immigration hearings and lack legal advisors and other advocates. In addition, there is a shortage of therapeutic assistance for managing the restrictions of detention and coping with the trauma suffered in their short lives. Even if the children have relatives in the U.S. who could serve as guardians, these are likely to be illegals and thus not identified to the authorities.

In sum, unaccompanied migrant children are treated as adults and essentially criminalized for the civil offence of undocumented entry under U.S. immigration law which forbids immigration judges from considering a child’s best interest.

The Obama administration has, at long last, launched a series of executive actions on immigration which mitigate this unjust and inhumane situation. The Deferred Action for Childhood Arrivals Program (DACA) enabled established migrant youths to obtain work permits and driver’s licenses while they continue their legal struggles for citizenship. Also, a federal judge recently ruled that hundreds of women and children in holding facilities should be released finding their detention in grave violation of the landmark 1997 Flores Settlement that set specific legal requirements for the housing of immigrant children.

Whether or not these initiatives can survive legal challenges and the fanning of anti-immigration flames by the current crop of presidential candidates eager to raise their public profiles remains to be seen.

Whose Child Am I? underscores the imperative of immigration reform for both practical and humanitarian reasons. A sealed border and blanket deportation of all illegals are patently unrealistic, while detention and deportation costs American taxpayers dearly not only financially and in loss of human resources but also with respect to our rapidly deteriorating reputation as a safe and caring haven for those in need.