The Whole Town's Talking: A Novel 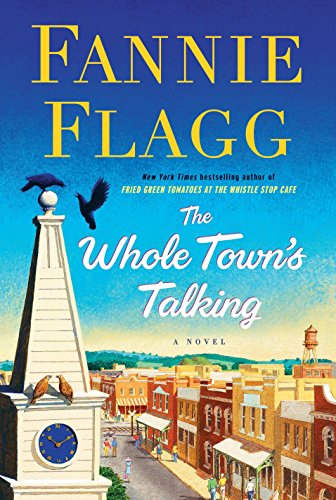 If all of Garrison Keillor’s reports from Lake Wobegon were strung end to end, the result would be something remarkably similar to The Whole Town’s Talking, Fannie Flagg’s latest novel.

Or, better still, if One Hundred Years of Solitude were set in Missouri . . .

So much is formula in The whole Town’s Talking that the reader feels as if he has not only read this book before, but reviewed it, with no apparent malice, but with something like a cry from the heart, asking, politely, that there be no more, no more.

Truly, in approaching all of her writing since, there is no expecting Ms. Flagg to reproduce Fried Green Tomatoes at the Whistle Stop Cafe. There will not be another Fried Green Tomatoes. That painting has been painted. That symphony has been constructed and conducted. And that movie was pretty damned good as well.

Like all writers, Ms. Flagg has had to move on. Tell other tales. Explore other aspects of her imagination.

But The Whole Town’s Talking is such a pastiche of other works that it seems as if she were exploring the imaginations of others and not her own.

Consider perhaps the central device of the novel: that when they are laid to rest, the founders of what was first called simply Swede Town and later became known as Elmwood Springs, are buried up at Still Meadows, where those founders and their descendants linger, greet all new arrivals, and gossip, seek information, and generally complain about what the world has come to.

It’s such a direct “homage” to Our Town that the reader cannot help but expect that the citizens of Thornton Wilder’s Grover’s Corners are spinning in their graves and bitching about it in New England accents.

“Original, profound, The Whole Town’s Talking, a novel in the tradition of Thornton Wilder’s Our Town . . .”

And the reader is left to wonder how a novel that so heavily depends upon borrowing a device that was both powerful and innovative when its originator first created it could possibly ever earn the adjective “original.”

Or when aping a plot device got niced into being “in the tradition of?”

But we are living in a post-fact, post truth world now, and so we are very likely just going to have to accept it and move on.

The whole of the back jacket of The Whole Town’s Talking is dedicated to a single quote from a prestigious book review. One in which Fannie Flagg is called “a born storyteller.”

And with this the reader takes no issue. She has, over the years, brought a great deal of pleasure to many. Her characters are entertaining. Her sentences go down easy. Her stories are set in an America in which villains get routed and good folks live nice lives. And Town’s no exception.

It is the sort of place in which Bonnie and Clyde drive through, intending to rob the bank, but are treated so nicely that they decide instead to drive on, not wanting to mess up the place.

It is the sort of place in which the Great Depression did not hurt the town particularly hard, because there was a great dairy farm and a multitude of smaller farms for vegetables and fresh eggs and everyone looked out for others, so no one had to go hungry.

It is the sort of place in which mail order brides become true loves, even if they wear glasses.

It is the sort of place inhabited by characters named things like Elner Shimfissle and Lucille Beemer and Lorder Nordstrom.

And it is the sort of place whose best times are its early times, even before the roads are put in, and that by, say, 1970, the best was past and the worst was yet to come.

As very much a character driven novel, the plot is light—indeed, the whole thing comes off as more pageant than plot, structured as it is in rigid timeline, travelling rather casually from first to last, from Lorder Nordstrom looking out over the rolling hills that would become Elmwood Springs, to the day in which malls and fast food restaurants cover those hills and the downtown that had been carved from nothing and was the pride of the villagers stands empty and the graveyard is filled with the remains of generations.

If there is a character on whom our author has heaped her love, it is Elner Shimfissle, and it is she who so charmed Bonnie and Clyde with her kindness and her insistence of taking them in and feeding them her good fig preserves when they got lost finding the road into town that they gave the local bank a pass. Elner calls to mind the adult Jane Withers (Google her) as she leaps off the page. In a book in which the reader has to, upon occasion, flip back a few pages to tell the Ednas from the Idas, Elner Shimfissle stands tall as a uniquely lovely creation. And thanks to the book’s allowance that death need not be a character’s endpoint, she remains a welcome addition to the book’s narrative both in the here and in the hereafter.

But while there are Shimfissles aplenty within that narrative, Elner stands alone in her uniqueness. And it only enhances the book’s pageant-like structure that so many of the God-fearing, clear-eyed white folk are interchangeable to the point of reader confusion.

But that, the reader guesses, is only right, as it is so often the case in life as well as fiction.