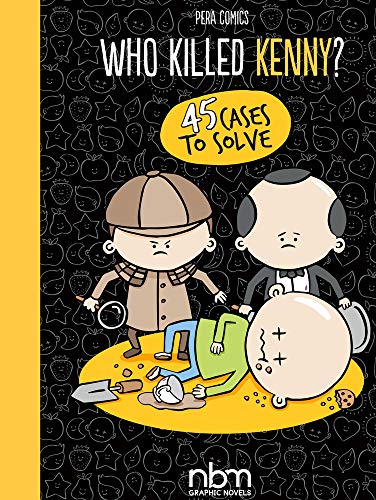 “for anyone who loves pop culture references and quick, easy fun, this book will help them while away those hours stuck in mass transit.”

Instagram sensation Alessandro Perugini, better known as Pera Comics, has turned his posts into a phone-sized book, presenting 45 mini-mysteries that aren't really mysteries at all, but an extended joke on the “Who killed Kenny?” theme from the South Park television show.

For fans of the Instagram posts, this book version should be very satisfying. As an object, it's small, easy to hold and read even while standing on public transit (which seems to be a major place for much phone reading). For those who don't know the Instagram series, this incarnation will be less satisfying. Each mystery is indeed short, one page long, with the reader presented with the choice of two (or more) killers.

The art is clean and simple and consists of a dead Kenny in the foreground with the suspects behind him. There is a wide range of killers, from Mathematics or Greek to Fiancee or Friend. Much of the humor lies in the choice of murderers, all completely random and besides Fiancee or Friend, not your typical suspects.

The clues are not clever or thoughtful since actually solving the mystery isn't the point. Given the single-page format, the amount of information that can be presented is limited, after all. So there is no question of figuring out motives or alibis. The fun lies instead in the sometimes convoluted “answers” on the page following each mystery scenario. An example is whether Kenny was killed by Coke or Pepsi. The answer: “It was Coke for these reasons: Motive: Kenny started drinking the Coca Cola and it killed him in self-defense! Also the Coca Cola is lying because the corpse wasn't killed where it is but was dragged there!”

For those used to the logical rigor of real mysteries, the supposed motive could have applied equally well to Pepsi. Maybe Kenny prefers Pepsi and was trying to drink that soda, not the Coke. As for the “corpse being killed where it was,” Miss Marple would insist that a corpse can't be killed since by definition it is already dead. A person can be killed. A body can be killed. A corpse can be dragged, yes, but not killed. And as for dragging the corpse, where is the evidence for that, and why does it matter? Hercule Poirot's little gray cells would find these “cases” enormously frustrating. But for anyone who loves pop culture references and quick, easy fun, this book will help them while away those hours stuck in mass transit.