The White Queen: A Novel (The Plantagenet and Tudor Novels) 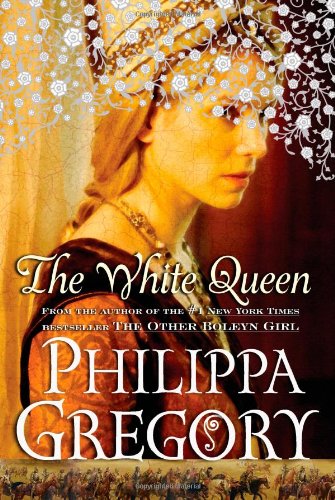 Royal families hold the title of being the precursor of reality entertainment. These infamous courts provide more melodrama and intrigue than chivalry and decorum. Regardless of their high station, for members of these families morality takes a back seat to murder, incest, and betrayal. Power is the asset that all strive to cultivate.

The characters in Philippa Gregory’s The White Queen are taken from the bloody battle for the crown in the Cousins’ War, a.k.a. the War of the Roses. A civil war tore 15th century England apart when the Plantagenet family split into the rival factors of Lancaster (the red rose) and York (the white rose). The book’s heroine is Elizabeth Woodville, the wife of York king, Edward IV. Her riveting story is deserving of a full-length novel. From whore to witch and everything in between, she is a woman whose multifaceted personality defies categorization.

God forbid a royal marry for love. Like a modern day Princess Diana, Elizabeth is an English commoner without massive fortune or titled family. She meets Edward while begging on the side of the road. Her beauty is enough to stop him in his tracks. They exchange vows in a secret ceremony. When they go public, the kingdom’s gossip mill goes into overdrive. Why would a king reject an advantageous alliance with one of the princesses of Europe for a nobody who has nothing to offer? The only plausible explanation? Witchcraft, of course. She tricked him into it with her mystical allures and diabolical enchantments.

Claiming to be the descendant of a goddess doesn’t help. Melusina is the inspiration behind the tale of The Little Mermaid. The half-woman/half-fish desires to keep her dual identity from her husband who nevertheless discovers her secret ultimately resulting in rejection and separation. Elizabeth is a firm believer in her fabled ancestry. “[Melusina] is the ancestress of the royal house of Burgundy, and we, her descendants, still try to walk in the paths of men, and sometimes we too find the way unbearably hard.” Her position as Queen of England leads to similar conflicting emotions between what it means to be a mother versus what it requires to be a monarch.

??Edward seizes power from the sainted Lancaster king, Henry VI eventually being accused of his predecessor’s murder. Elizabeth, as the usurping queen, has a tenuous hold on power. Her mother, Jacquetta, goes even further stating, “It is a battle to the death. This is what it means to be Queen of England. The road you have chosen will mean that you have to spend your life scheming and fighting. Our task, as your family, is to make sure you win.”

Yet Elizabeth can’t help but revel in her new position. “I become a new being, one above mortals, only one step below angels, beloved and elect of heaven. Half the kingdom may hate [my family] but now I have made us so powerful that I do not care.”

However, the love match isn’t all bliss. Elizabeth turns a blind eye to her husband’s notorious philandering. “Edward’s whoring doesn’t trouble me. He is the king, he can take his pleasures where he wants. And I am the queen, and he will always come home to me. Everyone knows that.” Edward does not try to hide his infidelity, in fact, he boasts about his excessive virility. “I have a score of whores, perhaps hundreds. I hope that no woman can resist me.” In fact, he is so consumed by desire he frequently summons Elizabeth with the command, “Bed, Wife.”

??With shades of the Clintons, Elizabeth seeks to hang onto the throne even without Edward at her side. Despite her humble beginnings, she is determined not to lose what she gained through her advantageous marriage. But there are those who question Elizabeth’s priorities including her own daughter. “I think we are cursed. I blame you and my father for bringing us into the world and putting us here, in the grip of ambition, and yet not holding strongly enough to power to make it right for us. You love the crown more than your children (i.e. the unresolved fate of the princes in the Tower—were they murdered, hidden, etc.?).”

??Gregory hits her stride when she depicts Elizabeth debating the roles of her new life with her mother, Jacquetta; her brother, Anthony and her daughter, Elizabeth. The scenes of dialogue illustrate a woman grappling with what is right in a world that does not play by a set of rules.

The narrative falters when Elizabeth is depicting conjuring storms or scheming for influence while in sanctuary. The book is heavy in explanatory exposition and could have moved at a faster pace if it did not follow such a rigid time line. Some moments that occurred during Elizabeth’s life could have been told with a brief chapter introduction instead of pages of battlefield play-by-play.

Overall, love at first sight ends with heartbreak in the Tower.