The White Man Who Stayed Behind 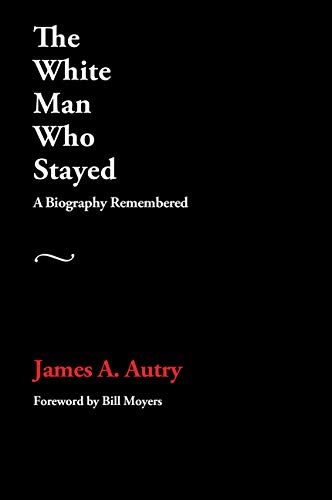 “there is still much left to accomplish in racial relations and justice. This biography of one man is a roadmap of sorts as to the depth of dedication that will be required to achieve parity for all Americans.”

Renowned journalist and political commentator Bill Moyers writes a very compelling foreword to The White Man Who Stayed Behind that beckons the reader to begin the journey of understanding of as he puts it,  “not only the story of one white man named Douglas Autry but also of an epic struggle that still plagues the south.”

He (Moyers) asks, “How bad was it? Bad enough to inspire Nazi lawyers in Germany. In his polemic Mein Kampf Hitler not only expressed admiration for America’s commitment to racial purity, he praised the genocidal assaults that had gunned down millions of Redskins to a few hundred thousand.

“Without America, he wrote, a conscious unity of the white race would never have emerged.” Nazi lawyers found this dedication to limiting all leadership to the white race as quite enticing. Moyers states further that “Our race laws were so indelibly linked to the shaping of Nazi policies that by the mid 1930s Germany and the American South had the look of a mirror image.”

In Benton County, Mississippi in the 1950s racial strife was simmering. The 1954 Supreme Court Decision in Brown v. The Board of Education ruled that segregation by the states of public schools was unconstitutional. People did not want any change that they believed would threaten their way of life.

According to Author James A. Autry, “From the time of the ruling there had been resistance of all sorts from outright peaceful defiance to a re-birth of Klan-like activity.” In small towns, the WCC (White Citizens’ Council) put up signs near the city limits that read, “The White Citizen Council of_____­­­­­___Welcomes You.”

Here are a few passages from one of their pamphlets:

“Maybe your community has had no racial problems! This may be true; however you may not have a fire, yet you maintain a fire department. You can depend on one thing.”

“The NAACP (National Association for the Agitation of Colored People) aided by alien influences and left-wing do-gooders will see that you have a problem in the near future.” It adds, “The Citizens Council is the South’s answer to mongrelizers. We will not be integrated. We are proud of our white blood and our white heritage of sixty centuries.”

Right after the 1954 Supreme Court Ruling to integrate schools, the Jackson, Mississippi Daily News declared, “This is a fight for white supremacy. There will be no room for neutrals or non-combatants. If you are a member of the Caucasian race, you are for us or against us.”

At first glance, The White Man Who Stayed Behind appears to be a small-town family story replete with anecdotes full of southern charm. But the dark side of this segregated Mississippi locale becomes quickly apparent. The white citizens here consider themselves to be good Christians, but African Americans are referred to as the “n” word and other derogatory terms. Reconciliation seemed impossible.

And yet, the one white man who stayed to provide both hope and change kept pursuing progress. This man, Douglas Autry came back to his hometown in Mississippi and got elected county superintendent of education, and against all odds of changing the attitudes of the townspeople he was able to bridge the gap between white and Black people. This didn’t come without personal hardship that involved time served in a work farm. Yet after he was pardoned, he returned to continue his quest in equality for all.

The White Man Who Stayed Behind recounts a human story that is as relevant today as it was in the 1950s when the events occurred. Much has changed in the south and in the country at large, but there is still much left to accomplish in racial relations and justice. This biography of one man is a roadmap of sorts as to the depth of dedication that will be required to achieve parity for all Americans.