White Fury: A Jamaican Slaveholder and the Age of Revolution 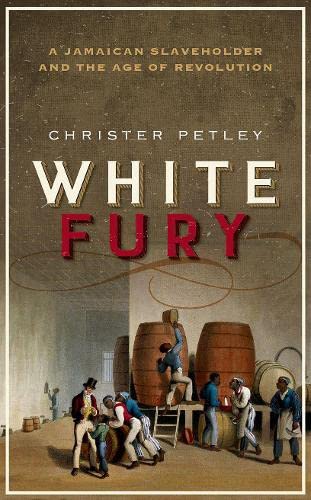 "White Fury tells a highly readable complete history of the once-powerful colonial Jamaican sugar economy through the letters of Simon Taylor, one of its greatest planters."

Simon Taylor (1739–1813, born and died in Jamaica) rises above just "a Jamaican slaveholder." Author Christer Petley writes of Taylor as "wealthier than almost any other West Indian slaveholder" and "living in luxury as one of the most important figures in Jamaican colonial society."

White Fury covers the world of Taylor through his correspondence "with family, friends, and political lobbyists" "on matters of family and business" and "themes, like transatlantic politics, war, and revolution." "No such collection survives for any other British Caribbean planter." "They do not provide," however, "a clear window into the soul of their author."

At the time of Taylor's birth, the British Empire came into its own in an international trade in coffee, cotton, fur, hides, rice, sugar, and tobacco. "Of all those commodities, West Indian [Caribbean] sugar was by far the most important, becoming Britain's most valuable import during the 1740s, a status it retained until overtaken by raw cotton in the 1820s."

"More than eight out of every ten people living in Jamaica were slaves." The planters lived with the "risks of resistance and retribution." Jamaica's slave population grew only from African slave imports "underlining the deadly nature of slavery on the island." Disease killed black and white Jamaicans.

In 1760, the Eton educated Taylor "inherited wealth that made him as rich as almost any other white Jamaican of his time" and he "determined to turn his substantial inheritance into an even greater fortune." He would claim that he knew of no better school of business than Jamaica.

"Taylor tried to cultivate a British identity" but he lived a creole lifestyle "shaped by his relationship with African and free-colored people within the grossly unequal setting of a slave society." Unlike many Jamaican planters, he never left the island to become an absentee owner.

Taylor died leaving an estate of "over 2,000 slaves living on his properties, and his personal estate was valued at over f750, 000, fifteen times that of his father Patrick and vastly more than his contemporaries." He had invested heavily in the "exploitation, inequality, and opportunities of colonial Jamaica."

Operating a sugar plantation proved immensely complex. On just his Lyssons Plantation, Taylor had 300 slaves, "many of them born in Africa," chiefly "in the fields planting sugar cane, tending cane, cutting cane" but "others drove the cattle and mules, worked as carpenters, as blacksmiths, as coopers, or operated the heavy machinery." He had two other plantations and managed others for absentee owners.

In addition to the above, "tough task masters" drove the slaves through the cane fields that yielded up an un-romantic taste of eighteenth century Jamaican reality." "Slaves moved and spread tons of animal dung. Other workers spent time on provision grounds, "repairing buildings, dams, or aqueducts, or tending the livestock."

Agricultural writers of the time like Thomas Young and the anonymous author [Richard Oswald] of American Husbandry published their ignorance of sugar production wrong. A plantation, however, had more than "machetes, hoes, carts, and barrels" but also "paper, inkstands, quills, and sealing wax" as well as "copper pans in the boiling house or gears in the mill."

Planters like Taylor "invested in these labor-intensive and mechanized process of manufacturing raw materials into a saleable commodity" even before the industrial revolution. "Assuming their gambles paid off, the hundreds of hogsheads of sugar produced at their works made them annual incomes far larger than those of all but the wealthiest of English landowners."

The growing British and world market made sugar valuable, but British trade policies gave its colonies "a virtual monopoly" for the home market. Petley writes, "a Caribbean sugar plantation was the single most lucrative form of property in the British Atlantic world." This economy provided capital to the Industrial Revolution of "British railways, factories, or mines" but also food that freed up workers for the factories and mines.

Author Christer Petley writes, "four major events contributed to strains that caused the eighteenth century empire" of Simon Taylor and the Jamaican sugar planters. These crises included the effects of the American Revolution, the French Revolution, and the Haitian Revolution, in all the years between 1775 and 1804.

The fourth element proved the most important, the abolitionist movement to end slavery in the British Empire. "One out of every six of the enslaved people forced aboard a slave ship died on the notorious trans-Atlantic crossing" and "about a third [of the newly arrived slaves] died during the so-called 'seasoning period,' which lasted for three years after their arrival."

"Taylor bore witness to those violent and transformative times." Today, "remnants of plantations, slavery, and colonialism might be buried on poor Caribbean islands, falling apart, difficult to discover," as are the ruins of the once spectacular monument over Taylor's grave. They "are tenacious and nagging reminders that the planters, and all they stood for, haunt us still."

White Fury tells a highly readable complete history of the once-powerful colonial Jamaican sugar economy through the letters of Simon Taylor, one of its greatest planters. Undoubtedly, more remains undiscovered in the vast Taylor papers. The volume is thoroughly researched, and it is well-illustrated.