White Fright: The Sexual Panic at the Heart of America's Racist History 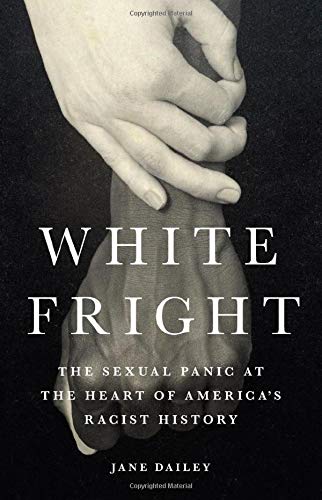 “chronicles the century-long struggle following the Civil War by Black Americans and other people of color for true civil and social rights, particularly the right to engage in interracial—and, eventually, same-gender—sex and to marry anyone one wants to.”

Netflix is current running the movie, Loving, a dramatization of the true historical drama of the interracial love affair and marriage of Richard and Mildred Loving. The Loving’s Supreme Court case—Loving v. Virginia (1967)—concludes Jane Dailey’s illuminating history, White Fright: The Sexual Panic at the Heart of America's Racist History. The book chronicles the century-long struggle following the Civil War by Black Americans and other people of color for true civil and social rights, particularly the right to engage in interracial—and, eventually, same-gender—sex and to marry anyone one wants to.

The film is set in in mid-1950s thru mid-’60s Virginia and depicts the couples’ friendship and shows that their sexual relations were accepted by their respective families and immediate community. But it makes clear that their 1956 marriage was condemned; they were arrested, and Mrs. Loving jailed. It captures the historical irony of their lives— their love for one another and acceptance by their respective families, but the humiliation suffered from the police, racist associates, and the courts for marrying. It depicts how they endured and the long, drawn-out legal battle they mounted with the American Civil Liberties Union (ACLU) to redress their justly experienced grievances.

In the 1967, a unanimous Supreme Court found Virginia’s—and other states’—laws prohibiting interracial marriage unconstitutional, thus acknowledging marriage as a fundamental right. The decision had significant consequences. As Dailey acknowledges: “The overall disappearance of antimiscegenation anxiety as an accepted public language is momentous; it represents the collapse of the most enduring color barrier in the United States.”

The term “miscegenation” was coined in 1863, at the height of the Civil War, by David Cole and George Wakeman, two New York “copperheads,” northern supporters of the South. It was intended to be a scientific-sounding term to demonize race mixing and to replace the notion of “amalgamation.” Amalgamation had long been used in America, referring to the mixing or blending of two or more distinct ethnic or racial groups through intermarriage or nonsexual cultural exchange.

Dailey, a University of Chicago historian, has written a number of other books about American race relations. In this study, her focus is clear: “For more than a century, between emancipation and 1967, African Americans rights were closely bound, both in law and in the white imagination, to the question of interracial sex and marriage.” She goes further, arguing: “At every stage of the struggle for civil rights, sex played a central role, even when its significance was left unspoken.”

White Fright focuses what the author calls “fright”: a sentiment among many white Americans that Black men posed a sexual threat to white women. The fright was at once an imaginary personal experience of a social relationship but with political consequences. The sentiment rested on the belief that Black males sought to deflower “pure” white women—and that the white woman was incapable of desire for a Black man. If such an interracial sexual liaison took place and—worst case—a child was born from such a matting, traditional (Southern) white society would be threatened.

Dailey documents how the battle over "racial purity" took shape following the Civil War and was imposed through the tyranny of Jim Crow policies. The author notes, “As practiced by those dedicated to the proposition, ‘white supremacy’ was both a social argument and a political program designed to reestablish white men’s social and political dominance after the war and Reconstruction." She contends that racial sex “fright” anchored many aspects of Southern segregation policies, including legal practices, electoral disenfranchisement, and religious doctrine.

White Fright is a complex study. It is anchored in a careful review of the history of the broad civil rights movements and the role interracial intimacies played—both actual and fantasied. Dailey reminds readers that the NAACP long sought to avoid cases of sex discrimination—as with the Loving case—in favor of launching a vigorous assault on education and voting issues. The author carefully reviews much of the legal issues in which the social intimacies between the races played out, including Reconstruction-era Constitutional Amendments through numerous critical states and federal (i.e., Supreme Court) decisions. Her consideration of “blood purity” requirements is a reminder of just how crazy racial politics can get.

Most moving, Dailey reviews the painful history of lynchings, racist police actions, and outright discrimination in which interracial sex was involved or alleged. These include the treatment of Black soldiers abroad by the American military during the world wars; the arrests and trial of Scottsboro boys in 1931; the murder of Emmett Till in 1955; and alleged interracial affairs during the ’60s civil-rights campaigns.

White Fright’s strength and weakness is that it the narrative is intimately linked to the evolving civil rights movement during the century following the Civil War. Its focus on post-Civil War era does a disservice to the place of interracial relations that mark the two-and-a-half centuries the preceded the War Between the States. Perhaps Dailey should offer a follow-up study on this history.

One of the consequences of this absence, if not a mention in the Introduction, is that there is no recognition of Thomas Jefferson’s intimate involvement with Sarah (Sally) Hemings, a house slave and “body servant” to his youngest daughter. As has been thoroughly substantiated, their illicit relations bore six children and the couple had a deep and long-lasting relationship.

While the author mentions the noted abolitionist Frederick Douglass, she uncritically quotes a sentence from W. E. B. DuBois: “The marriage of Frederick Douglass to a white woman did not injure society.” Douglass’s first wife, Anna Murray, was a free Black woman from Baltimore who helped finance his escape from slavery. Following her death, he married Helen Pitts, a white woman 20 years his junior. Missing from Dailey’s account is acknowledgement of Douglass’ intimate relationship with Ottilie Assing, a half-Jewish immigrant journalist who, like Karl Marx, was a “’49er,” a veteran of the Germany revolution of 1849. She was an outspoken abolitionist who met Douglass in 1856 when researching an article for a German newspaper and had a nearly three-decade sexual and professional relationship with him; she was close with his family.

The author gives passing recognition of Pocahontas’s marriage to John Rolphe but does not acknowledgement that in 1662, nearly a half-century after their marriage, the Virginia Assembly established the first law against interracial sex. Not does the author identify any of the many interracial sexual relations and marriages that set the stage for the racist “white fright.” The first recorded legal marriage between an African man and a European woman took place 1681 on William Boarmans’ plantation on the western shore of Maryland. The couple—Eleanor Butler, a white servant girl called Irish Nell, and Negro Charles, a black slave—was married by a local Catholic priest.

A final mention must be made to the intentional community of Nashoba in western Tennessee. Founded by Francis Wright, utopian socialist, it was a mixed community of women and men, married and unmarried, Black and white. It sought to not merely challenge deep-seated racial practices and beliefs, and do so south of the Mason-Dixon line, but also challenge fundamental Christian values and sexual mores. On June 16, 1827, James Richardson and Josephine Lolotte declared themselves married and began to live together. Their arrangement is important now, nearly two centuries later, because Lolotte was a free Black woman and Richardson a free white man. Equally important, in living together Richardson and Lolotte declared not only their love and sexual desire for one another but entered into a binding commitment outside the sanctity of church and state.

The U.S. is a different county today than it was following the Civil War let alone in 1967, the time of the Loving decision. Today, a mixed-race woman married to a white man has been elected to be the next vice president. According to Pew Research, in 1967, only 3 percent of newlyweds and of all married people were interracial couples; by 2015, the share of intermarried newlyweds had jumped to 17 percent and all married people reached 10 percent—that is 11 million Americans.

White Fright offers a unique and, sadly, often overlooked glimpse into the history of Southern racism and the civil rights movement. It is a story Dailey tells thoughtfully and from which we can all learn, for it’s the American story.