The White Devil's Daughters: The Fight Against Slavery in San Francisco's Chinatown 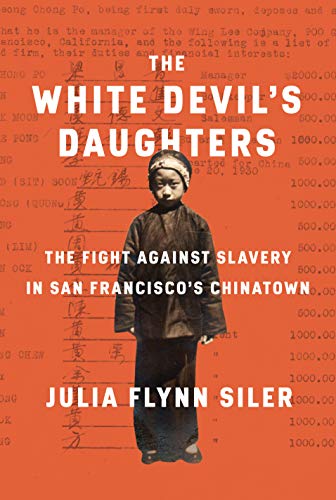 “While Harriett Tubman had her underground railroad, Margaret Culbertson and her successor Donaldina Cameron, daughter of a Scottish sheep farmer, had their Presbyterian Mission House at 920 Sacramento Street in San Francisco.”

Conventional wisdom has it that the Civil War sounded the death knell for slavery in the United States, and that its demise was formalized by the passage of the Thirteenth Amendment. But as Julia Flynn Siler tells us in her new book, The White Devil’s Daughters: The Women Who Fought Slavery in San Francisco’s Chinatown, an equally insidious form of slavery continued throughout the latter part of the 19th century and even into the 20th.

Arguably more subtle than what the abolitionists called our country’s “great national sin,” and others termed “the peculiar institution”—African slavery that fed the demand for plantation and household workers particularly in the South—what Siler describes is no less slavery for its subtlety.

The former involved slave traders who openly kidnapped Africans from their native lands and transported them to the United States to buy and sell in public forums. The latter involved traffickers secretly buying Chinese girls and young women, sometimes sold by their impoverished families, then transporting them from China to the United States and delivering them to brothels for forced servitude as prostitutes. A subset involved mui tsai, younger children who became household slaves.

For these women and children, there were no John Browns to lead bloody insurrections, no Frederick Douglasses to galvanize with his oratory, or Harriett Beecher Stowes to capture imaginations with Uncle Tom’s Cabin. Instead, there were some incredibly strong women, working almost in the shadows, dedicating their lives to actively rescue young Chinese girls from their captors, to provide them a place to live, and to help secure their futures.

While Harriett Tubman had her underground railroad, Margaret Culbertson and her successor Donaldina Cameron, daughter of a Scottish sheep farmer, had their Presbyterian Mission House at 920 Sacramento Street in San Francisco. By the time of Culbertson’s death in July 1897, “[o]ver two decades, nearly seven hundred girls and women had found shelter under Miss Culbertson’s care. . . .” The number would stretch to well over a thousand by the end of Cameron’s tenure.

Following in Culbertson’s footsteps, Cameron became the public face, and lightning rod, of the rescue mission at 920 Sacramento. Siler tells us: “Cameron served as legal guardian to most of the girls and teens living in the home. They called her Lo Mo, or ‘Mother.’ She, in turn, often referred to them as her daughters. But Cameron’s enemies used a racist epithet to describe her: The White Devil of Chinatown.”

The White Devil’s Daughters is not just the story of Culbertson and Cameron, angels by anyone else’s standards, but it also tells the stories of the girls they rescued. One was a young girl named Tien Fu Wu, who had been sold by her father when she was between the ages of six and ten to a procurer of mui tsai. Tortured by her “owner,” including suffering scars as a result of being burned with red-hot tongs, Tien was rescued by Margaret Culbertson. After Culbertson’s death, Tien became Cameron’s closest aide and remained her dearest friend until the day Cameron died.

While the historical context is fascinating on its own, Siler tells a story that is more than mere history, but is also a story of inspiration and shame. Inspiration, in the personal lives of the people involved, but shame, in that so many closed a blind eye to the travesty of so-called “yellow slavery” that existed in this country well after passage of the Thirteenth Amendment.

As the San Francisco Chronicle reported, “[S]lavery is not a thing of the past, but . . . human beings are to-day [sic] bought and sold into a worse slavery than ever Uncle Tom knew of.”

That “blind eye” was part of what, at the time, was known as the “Victorian Compromise”—“the idea that police and politicians tolerated vice as long as it did not touch or otherwise intrude on ordinary family life.” By that hypocritical process, thousands of Chinese girls were denied any semblance of an “ordinary family life.”

In a message she delivered at Mission Home in 1902, Cameron attacked the hypocrisy:

“To free the negro the entire forces of a great people were united, and no sacrifice either personal or political was considered too great to that end. Could not the Christian people of our State, with the same concentrated effort and firmness of purpose, lift the stigma of slavery from the Chinese community and give to the Oriental women and girls in our midst, the privileges which we so richly enjoy?”

Cameron died in 1968 at the age of 98, while Tien passed away in 1975. Between Donaldina Cameron and Margaret Culbertson, the Mission House took in over a thousand Chinese girls and women who had been sold into slavery and, sometimes with nothing more than love and determination, made a home for the homeless and provided a family for the abandoned.

The White Devil’s Daughters is their story. It’s worth a read.