White Christian Privilege: The Illusion of Religious Equality in America 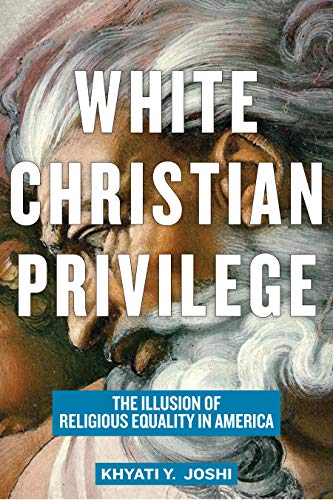 “‘In order to form a more perfect Union,’ books such as White Christian Privilege add enormous value to highlighting the gap between illusion and reality.”

In state-religion intersectionality, there are two types of nation-states. Separationist states commit to no religion; and fusion states subscribe to a single designated religion. Israel, for example, is a Jewish state. The United States is a separationist state, as the First Amendment prohibits the establishment of an official religion. The U.S. residents practice various faiths, but an overwhelming majority (70%) are Christians of diverse Catholic and Protestant denominations.

There is no showing that separationist states are more tolerant of minority religions. White Christian Privilege advances a similar thesis.

When a constitutional norm is at odds with the majority culture, as is the U.S. state-religion separationism, social tensions are inevitable. Describing these tensions, Professor Khyati Joshi argues that religious equality does not exist in America, and the system protects what she calls “white Christian privilege.” “Christian privilege allows Americans to take for granted the elevation of their religion over other faiths.” Even among Christians, Joshi singles out white Protestants as the most privileged.

Privilege means unearned benefits. Many scholarly works draw attention to the so-called white privilege—social mechanisms that confer undeserved benefits on white men and white women, despite the legal commitment to fairness. Joshi adds religion to race to examine privileged racial-religious comportment. White Christian privilege confers unequal benefits on white Protestants, excluding even Catholics. In practice, therefore, the U.S. is closer to being a fusion state of Protestant ethos, though the system creates what Joshi calls an “optical illusion” of religious neutrality.

In supporting her thesis of optical illusion, Joshi contends that “most Supreme Court Justices are themselves born, raised, and educated within . . . deep Christian normativity.” Therefore, it is hard for them to recognize that Hindus, Sikhs, and Muslims—the new Americans—can assert valid religious claims incompatible with Christianity. Even the rhetoric of “Judeo-Christian” America generates feelings of alienation for nearly 30% of Americans who are neither Jews nor Christians. The lower court judges, mostly Christians, are no better in enforcing the religious neutrality that the constitution promises.

Of South Asian origin, Joshi frequently brings up personal narratives and the harassment and discrimination stories of Hindus, Sikhs, and Muslims born and raised in the racialized Christian America. Joshi’s Hindu dad, a gynecologist, faced discrimination in Georgia because he was not a white Christian. Joshi’s Hindu friend in high school faced criticism for defying “team spirit” when “he refused to join the coach and his teammates in Christian prayer.” Since 9/11, “an entire global religion, Islam, is associated with violent, nihilistic movements,” forcing American Muslims to bear intense scrutiny at airports. The Sikhs wearing turbans face assaults for being Muslims.

Joshi describes America accurately. Many Americans are uncomfortable with non-white, non-Christian immigrants. The constitutional paradigm of religious neutrality does not translate into a culture that respects all faiths, just as racial equality does not honor all races.

Unfortunately, everywhere in the world, constitutional norms promise more than society can deliver. In the U.S., the optical illusion of religious tolerance and racial equality is no more than normative futurism, perhaps well-intentioned. The purposeful crudity of majoritarianism may soften for short periods, but it lingers and even reverts to extreme forms in times of economic and social distress.

Scholars are under an obligation to show faults hoping for their correction; however, scholars must be realistic in expectations. White Christian privilege does exist in America, just as Arab Muslim privilege exists in the Middle East. Christians in Egypt endure endemic hostility. Hindu privilege in India is resurging with unprecedented spite against “foreign religions” such as Islam and Christianity. For years now, the Buddhists in Mynamar are resorting to the genocide of the Rohingyas. The Uighurs in China are “terrorists” placed in boot camps.

Comparatively, religious freedom in America is much more real and protected than many other parts of the world. Muslims have built thousands of mosques across the 50 states. There is no restriction in constructing Hindu and Sikh temples. Despite the Protestant privilege, only one Justice on the Supreme Court is Protestant, five are Catholic, and three are Jews. Hindus are the CEOs of many top American companies. Likewise, Catholics, Jews, Hindus, and Muslims are members of the U.S. Congress.

The recent cases protecting the rights of gay and lesbians and Muslim women wearing hijab also indicate that Christianity is no longer the defining morality of Supreme Court jurisprudence.

The achievements of religious minorities in various fields do not weaken what Joshi points out in terms of harassment, discrimination, and even assaults on non-whites of non-Christian faith. The book documents significant evidence and brings together various social strands to demonstrate that white Christians have the most power in social, economic, political, and legal fields.

Yet Jews and Catholics are successfully enjoying mainstream Protestant benefits. Previously disregarded immigrants, whether the Irish, the Greeks, and the Italians, the so-called non-Protestants, are now all holding the “white Christian privilege.” The Protestant privilege is nowhere as strong as it once was.

It will indeed be harder for non-white and non-Christian immigrants, such as South Asians, and their progeny to become equal citizens with white Christians. In recent years, the reassertion of whiteness, in which previously excluded white ethnicities are vigorously joining, reaffirms the equality skepticism that Joshi brings to our attention.

Nevertheless, Joshi needs to acknowledge that discrimination against people of African descent has been and continues to be the most severe flaw of the American socio-legal system. White Christian privilege is a significant factor in the social distribution of benefits. But religious discrimination is not as harsh or systemic as is racism. Despite prejudice, Muslims, Hindus, and other religious minorities are doing well in America. Things are far from perfect. “In order to form a more perfect Union,” books such as White Christian Privilege add enormous value to highlighting the gap between illusion and reality.